At This B&B In Montana, You’ll Encounter More Than Just A Beautiful Mountain View!

Howlers Inn is a beautiful lodge nestled in the rolling hills of Bozeman, Montana. Its beautiful surroundings make it the perfect place to ‘get away’ from the hustle and bustle. But the scenic views aren’t the only thing you’ll encounter at this Inn. At Howlers Inn you’ll also find a pack of wolves!

Founded in 1992, Howlers Inn is not only a Bed and Breakfast, but it is also a wolf sanctuary. Their mission is to save wolves that, after being born in captivity, weren’t wanted anymore. According to the Howlers Inn website, while they are federally licensed to house and care for their wolves, they do not receive any government funding. They are completely funded by the Inn’s income and guest donations. Honestly, that just makes what they do even more amazing! At Howlers Inn, guests have their pick of rooms that allow them to get a view of the wolves in their enclosure. Howlers Inn even has a walking path that runs along the side of the wolf enclosure. Animal and wildlife expert, Coyote Peterson uses this path to get up close and personal with the pack! 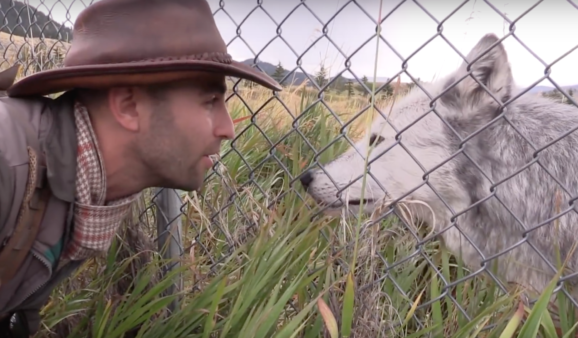 The pack at Howlers Inn is made up of five Alaskan Tundra wolves. And despite being raised in captivity, these wolves are still considered to be wild animals so Coyote Peterson stays on the path instead of stepping into the enclosure. In his video he explains the history of these creatures and how they live their lives. He even makes friends with the elder female of the pack. When the female notices Coyote near the fence, she decides to check out this new person in her environment. The result, she gets so close to the fence that Coyote could reach out and touch her if he wanted to. It truly is a beautiful sight.
Share on Facebook
Share on Facebook