We sometimes say that cats have nine lives, and perhaps it may be somewhat true when it comes to getting bit by a venomous snake. On the other hand, dogs struggle to have even a single life. It may make you wonder why cats are more likely to survive a snake bite, and scientists feel that they now have an answer.

Scientists from the University of Queensland, Dr. Bryan Fry and Christina Zdenek, saw some alarming statistics out of Australia. Out of all of the dogs bitten by snakes in that country, only 31% would survive. On the other hand, 66% of all cats would survive a snake bite. You would probably think the opposite was true, considering that the same amount of venom will be more deadly to a smaller animal.

“I’ve had two friends lose big dogs to snakebites, dying in less than 10 minutes even though the eastern brown snakes responsible were not particularly large specimens,” Fry said in a statement.

The report by Fry and Zdenek was printed in Comparative Biochemistry and Psychology. It seems as if the difference has to do with their blood. Of course, testing on live animals to see the response to venom would be inhumane, so they took some dog and cat blood and exposed it to venom in test tubes. They used venom from 11 snake species to run the test. In the end, it was discovered that the blood from a dog would clot much more quickly than blood from a cat. 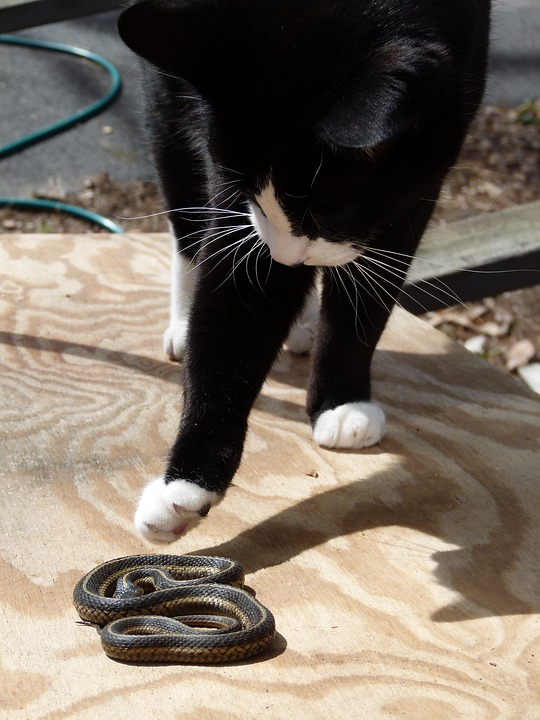 Some of the most dangerous snakes in Australia kill their victims by causing the blood to coagulate. Clotting is a natural reaction of the blood to keep bleeding to a minimum when a wound occurs. The venom in the snake uses the molecules that would lead to clotting, so it doesn’t allow the bleeding to stop anywhere else in the body. Since the blood of the dog would clot faster naturally, they are more vulnerable to a venomous snake bite.

Although many snakes may kill in that way, some snake’s venom uses the opposite approach by keeping blood clots from forming. Many Australian snakes, however, do use the venom-induced consumptive coagulopathy approach. Three times more bites occur to pets due to the eastern brown snake than all of the other venomous snakes in Australia combined.

“All venoms acted faster on dog plasma than cat or human,” Zdenek said. “The spontaneous clotting time of the blood – even without venom – was dramatically faster in dogs than in cats.”

IFLScience spoke with Fry, who said that the truth may be somewhere between the two, “But closer to the cat end of the scale.” No other animals have been compared through testing at this point.

In addition, dogs tend to be bitten in vulnerable areas. “Dogs typically investigate with their nose and mouth, which are highly vascularized areas, whereas cats often swat with their paws,” Fry said.

At the end of the day, Fry questions whether this knowledge will help us create a better treatment for snakebites. They say: “The anti-venoms are fine, the important thing is to get help very, very quickly. Vets must not delay [when treating dogs].”

Snakes that use consumptive coagulopathy from different parts of the world were used in the study. Fry feels that it would be interesting to find out how other venoms that use different principles would affect the animal blood compared to our own.