What is operant conditioning and how is it applied to dogs?

In the dog world, it’s known as clicker training. When the trainer is teaching a dog a specific behavior, he or she marks the event (completion of the task) with a sharp, sudden sound (the clicker) or a verbal marker (a quick “yes!” or “good”). Then it’s immediately followed by a reinforcement or reward –which is almost always food.

Operant conditioning was coined by behaviorist B.F. Skinner, which explains why it’s sometimes called “Skinnerian: conditioning. As a behaviorist, Skinner believed that internal thoughts and motivations could not be used to explain behavior. Instead, he suggested, we should look only at the external, observable causes of behavior, i.e., positive reinforcement to increase good behavior and decrease the bad.

We can find examples of operant conditioning at work all around us; for example, a human example could be children completing homework to earn a reward from a parent or teacher, or employees finishing projects to receive praise or promotions. An animal example would be a dog, learning through clicker training.

Since the dog will learn very quickly that a treat will be forthcoming if she performs a specific action, she’ll want to do it.

The removal of an undesirable outcome or the use of punishment can be used to decrease or prevent undesirable behaviors. For example, a child may be told they will lose recess privileges if they talk out of turn in class. This potential for punishment may lead to a decrease in disruptive behaviors. In these examples, the promise or possibility of rewards causes an increase in behavior, but operant conditioning can also be used to decrease a behavior. Again, in the case of the dog, she’ll understand very quickly that if she doesn’t perform the action, there won’t be any treat.

Man Charged After Disturbing Video Shows Him Throwing Duckling Off Chesapeake Bay Bridge: Click “Next” below! 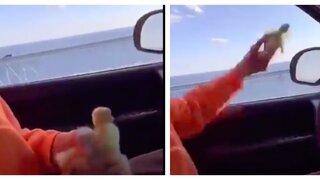