What are the pros/cons of salt in a dog’s diet?

Salt is the main dietary source for sodium, a major mineral that maintains fluid balance and regulates blood pressure and muscle contraction.

Salt, in moderation, can be beneficial to every system in a dog’s body. It’s even used as a preservative, keeping harmful bacteria from growing in foods.

Too much salt is harmful and can result in heart disease, kidney problems, pulmonary edema and other respiratory problems. Older and obese dogs are at greater risk.

Dog food already contains a lot of sodium, just in its ingredients alone. Meat, poultry, fish, vegetables, like carrots and potatoes, and gravies and broths all contain significant amounts. Sodium levels are generally higher in wet foods, because it helps control the moisture levels in food.

You could end up with a very high amount of sodium, if even more salt is added, whether for flavoring or as a preservative.
HOW MUCH IS TOO MUCH?
The Board on Agriculture and Natural Resources (BANR) is the major program unit of the National Research Council. It is responsible for organizing and overseeing studies on agriculture, forestry, fisheries, wildlife, and the use of land, water, and other natural resources. According to the BANR study, “Your Dog’s Nutritional Needs: A Science-based Guide for Pet Owners,” the daily recommended allowance of sodium for a healthy dog weighing 33 pounds and eating 1,000 calories per day is 100 milligrams, adjusted up or down as needed.
SODIUM ION POISONING
When too much salt absorbs in the dog’s body, this results in increased thirst which, in turn, leads to more frequent urination. In some cases, the dog’s body can’t process the salt fast enough, causing toxic affects and leading to sodium ion poisoning, a sort of “salt intoxication,” which restricts the amount of water and oxygen in the body. Symptoms include vomiting, diarrhea, kidney failure, a higher-than-normal body temperature and seizures. A trip to the veterinarian is warranted if you suspect sodium ion poisoning.

There's A Floating 'Catboat' Sanctuary In Amsterdam Where You Can Visit And Adopt Shelter Cats: Click “Next” below! 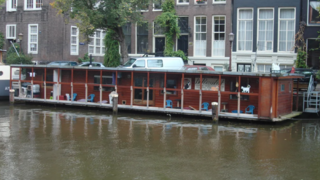