The Wildlife Conservation Society’s Favorite Wildlife Pics of 2020 show 20 different species living their best lives. After a year filled with heartache and fear, these images come as a welcome change, bringing hope for the new year.

Ten of the photos came from Julie Larsen Maher at The WCS’ flagship zoo, the Association of Zoos and Aquariums-accredited Bronx Zoo. Ten more were submitted by WCS scientists working around the world. According to a WCS press release, judges couldn’t help but include “an 11th Honorable Mention photo that has special significance that warranted inclusion in the 2020 list.”

Here are the finalists in the WCS zoo and aquarium category: 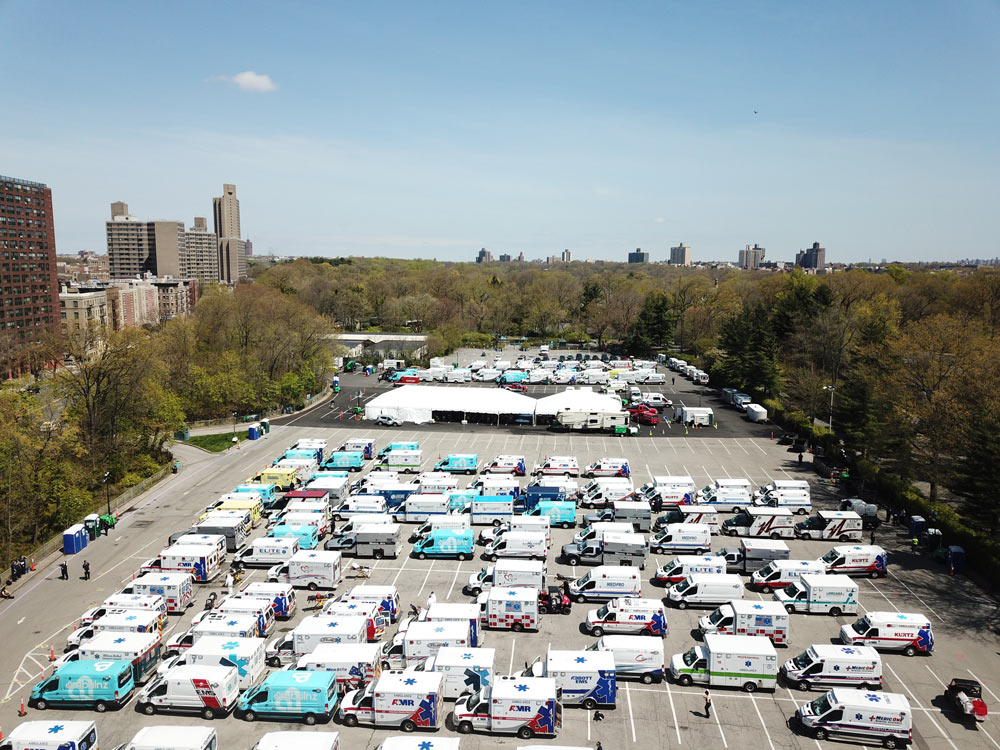 Hundreds of ambulances and emergency personnel from around the country descended on New York City in April 2020 at the peak of the COVID-19 crisis. The Bronx Zoo opened its parking lots and served as a home based for the visiting ambulances. Another parking lot at the Bronx Zoo was used by Montefiore Medical Center as a COVID-19 testing site. 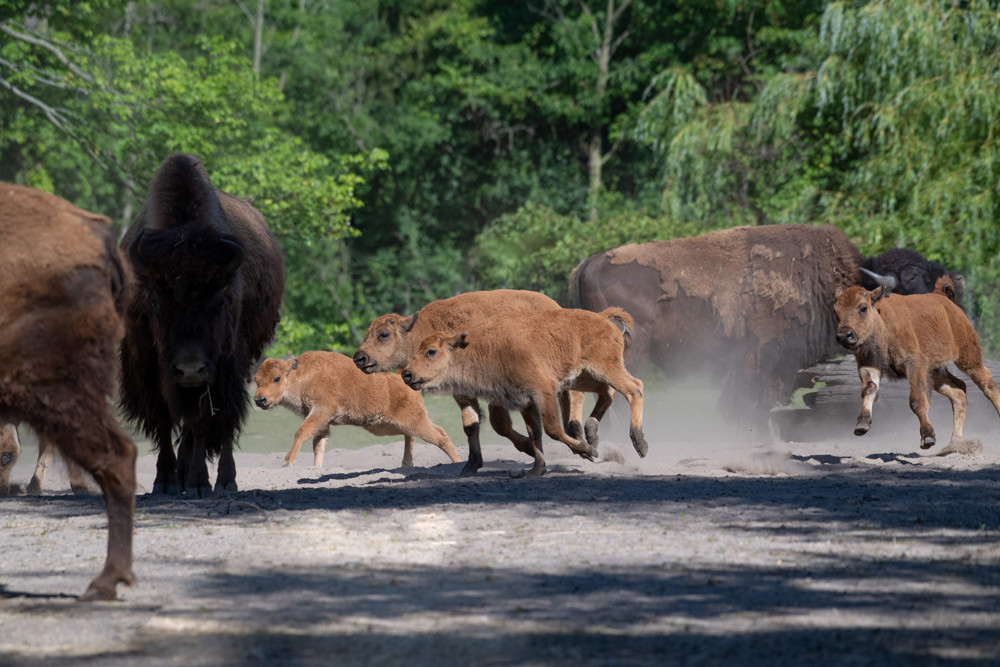 Eight pure American Bison (Bison bison) were born at the Bronx Zoo in 2020. The Bronx Zoo staff and scientists have been working to grow a herd of genetically pure bison that can eventually be used for future restoration programs in the American West. Bison have a significant place in the history of the Bronx Zoo. Bison born at the Bronx Zoo were reintroduced to the wild in the early 1900s when the species was on the verge of extinction. 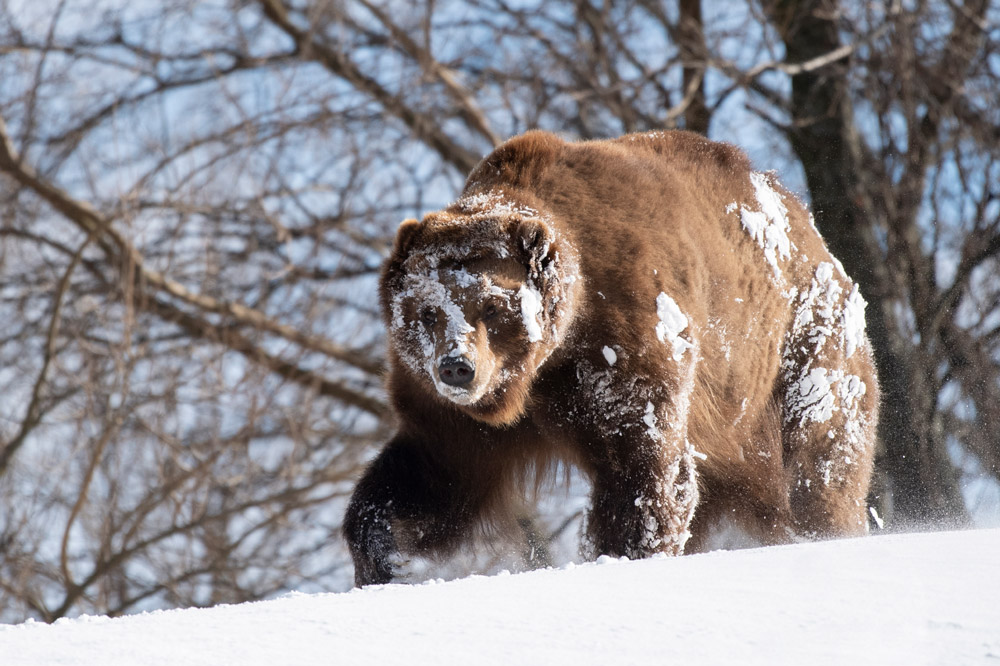 Following the first major snowstorm of the season, the brown bears (Ursus arctos) at the Bronx Zoo explored their expansive exhibit while digging and rolling in more than a foot of snow. All of the brown bears at the zoo are rescues that were orphaned in the wild as cubs and would not have survived on their own. 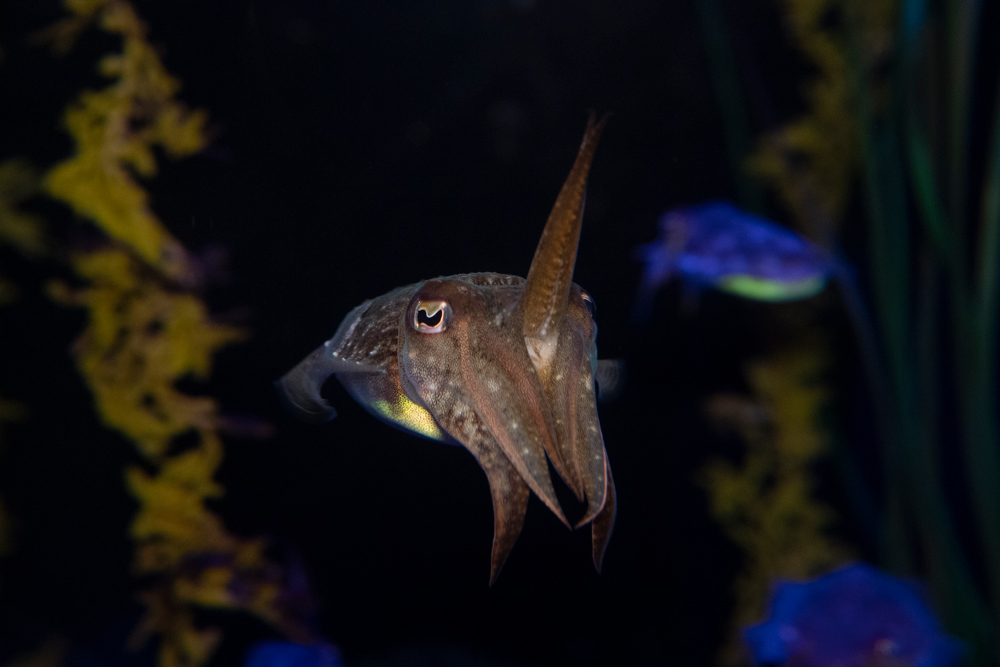 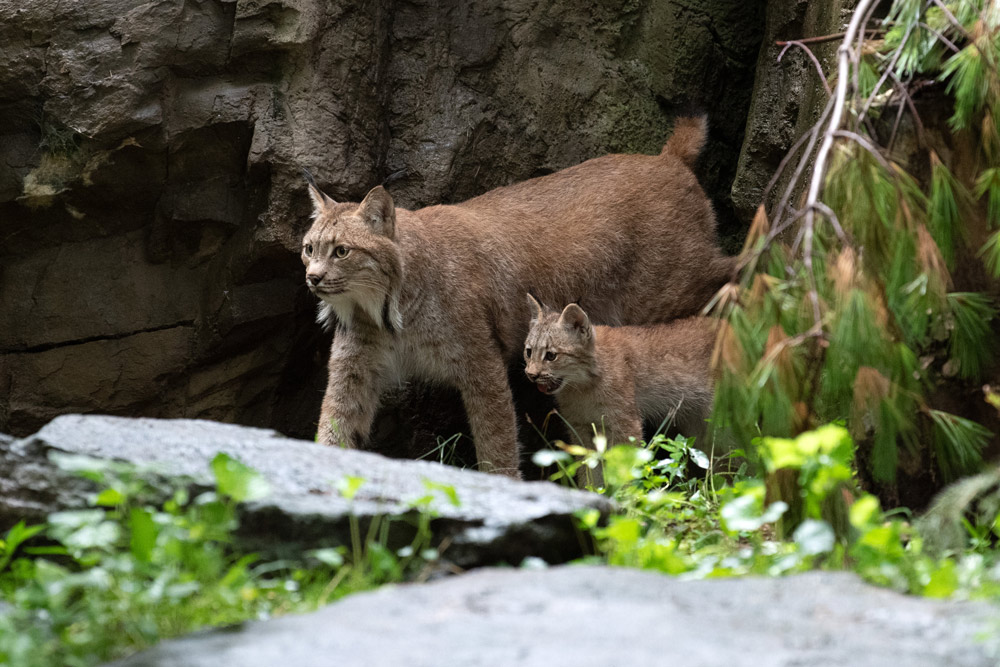 The Queens Zoo welcomed three Canada lynx (Lynx Canadensis) cubs this summer. This photo of the lynx mom and one of her cubs was taken as the cubs began venturing out and exploring their habitat. 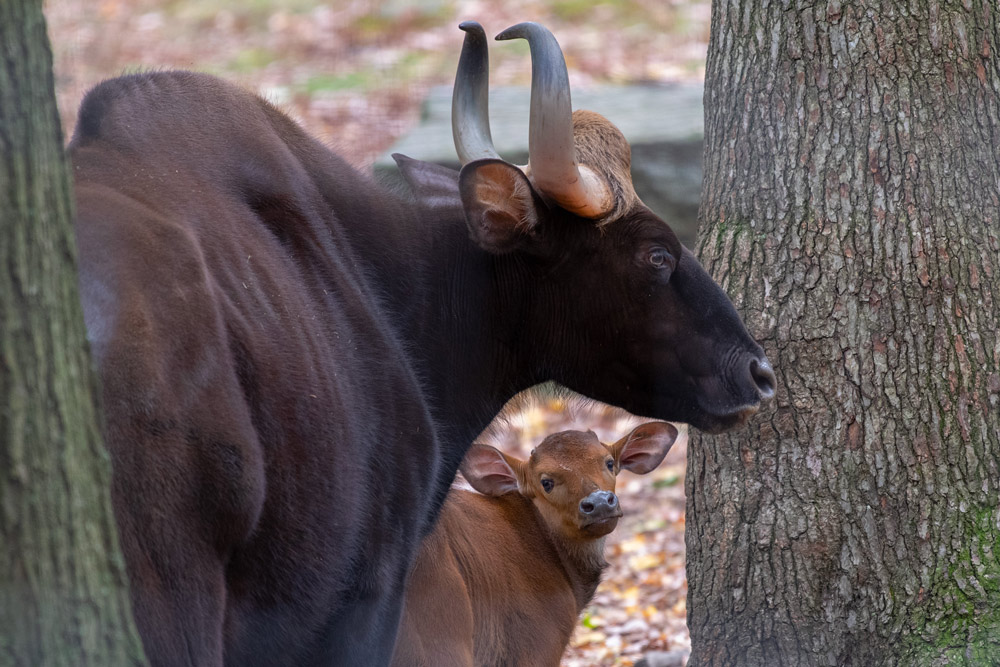 Since the fall of 2019, the herd of gaur (Bos gaurus) grew by 7, including two that were born while the zoo was closed due to the COVID-19 pandemic. Gaur are native to southern Asia and are the world’s largest species of wild cattle. The Bronx Zoo gaur herd, which is the largest herd of gaur in zoos accredited by the Association of Zoos and Aquariums, can be seen from the zoo’s Wild Asia Monorail. 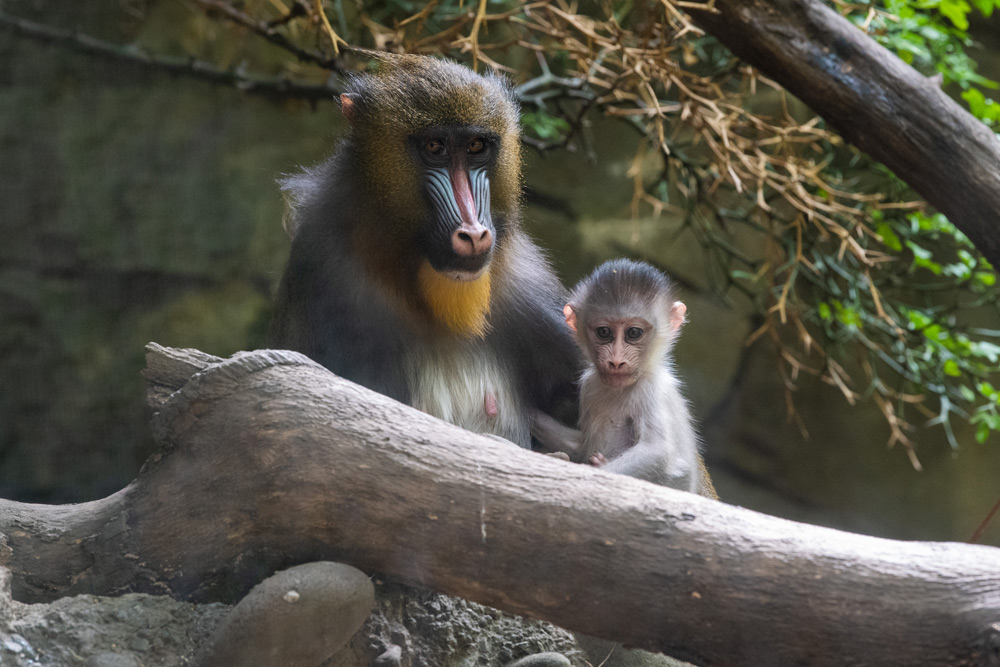 A mandrill (Mandrillus sphinx) and her baby sit in the Bronx Zoo’s Congo Gorilla Forrest. The Bronx Zoo has a successful mandrill breeding program that has produced many offspring as part of the AZA’s Species Survival Plan, a cooperative breeding program between accredited zoos that works to ensure genetic diversity in zoo populations. 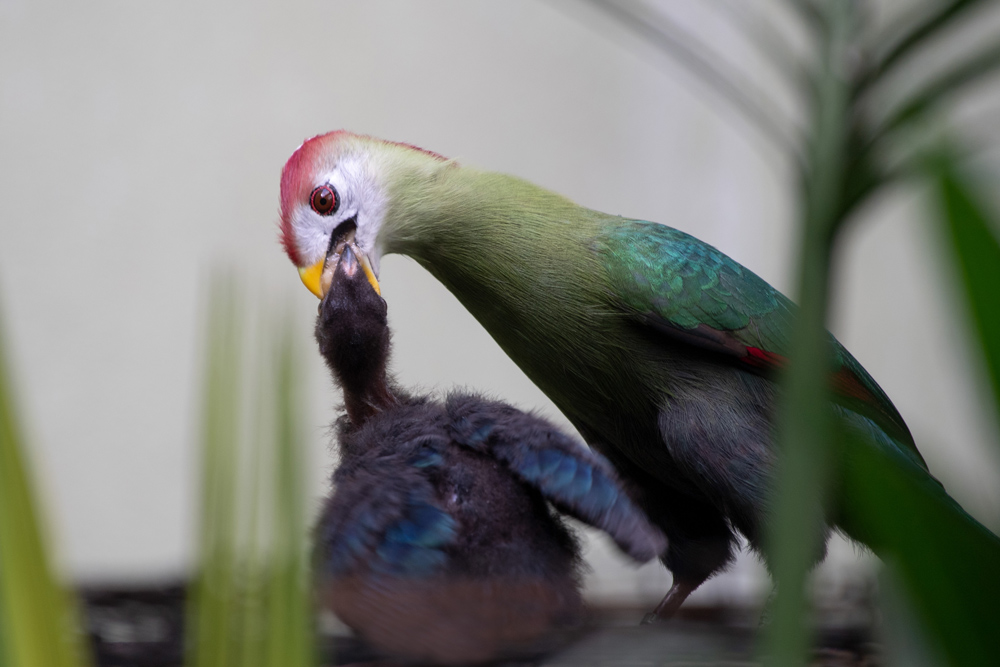 A rare hatching at the Bronx Zoo, this red-crested turaco (Tauraco erythrolophus) tends to her chick in the World of Birds. This Asian species is immediately recognizable with its green body, long tail and prominent red crest. 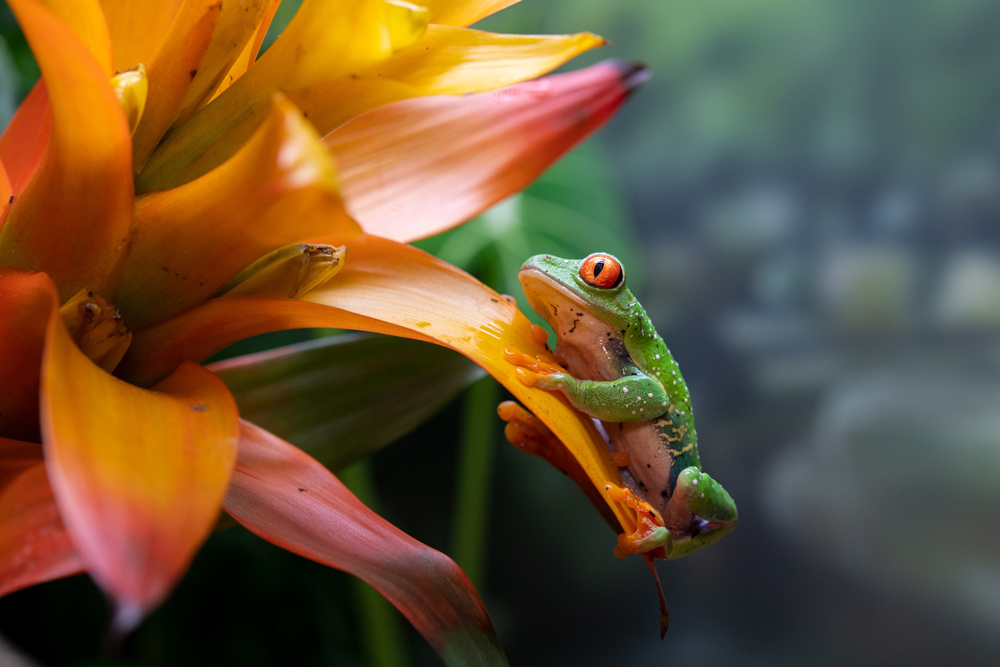 This red-eyed tree frog (Agalychnis callidryas) clings to a flower growing within its exhibit in the World of Reptiles at the Bronx Zoo. The beauty of the flower against the vibrant green skin and characteristic red eyes of the frog create one of the most colorful pictures of 2020. 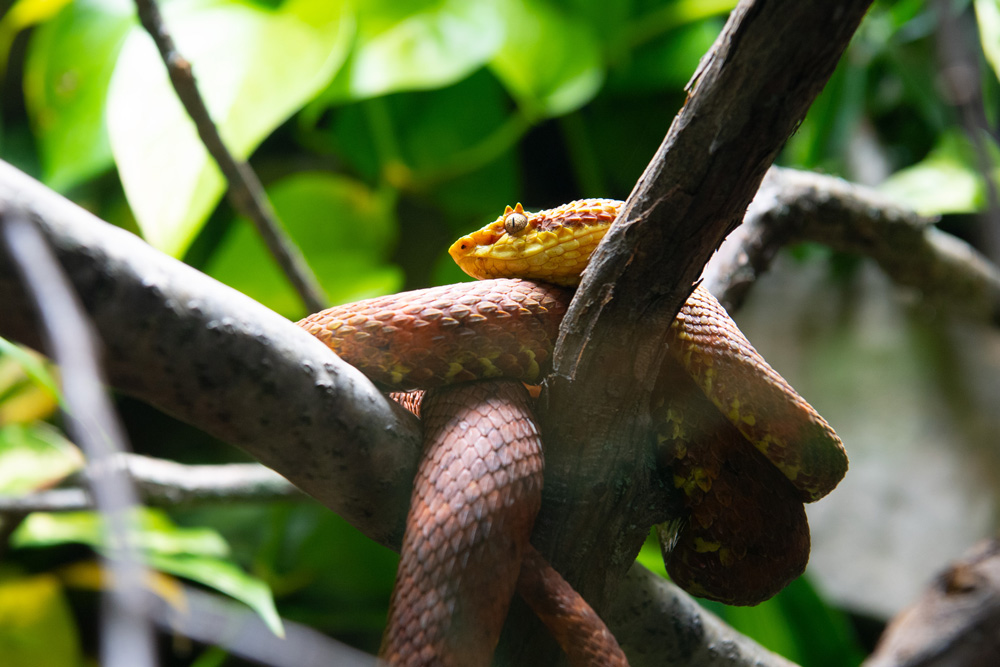 Those are not eyelashes. The scales above the eyes of the eyelash viper are thought to camouflage the snake’s eyes to help it hide while hunting prey. The eyelash viper (Bothriechis schlegelii), is a species of pit viper native to Central and South America. 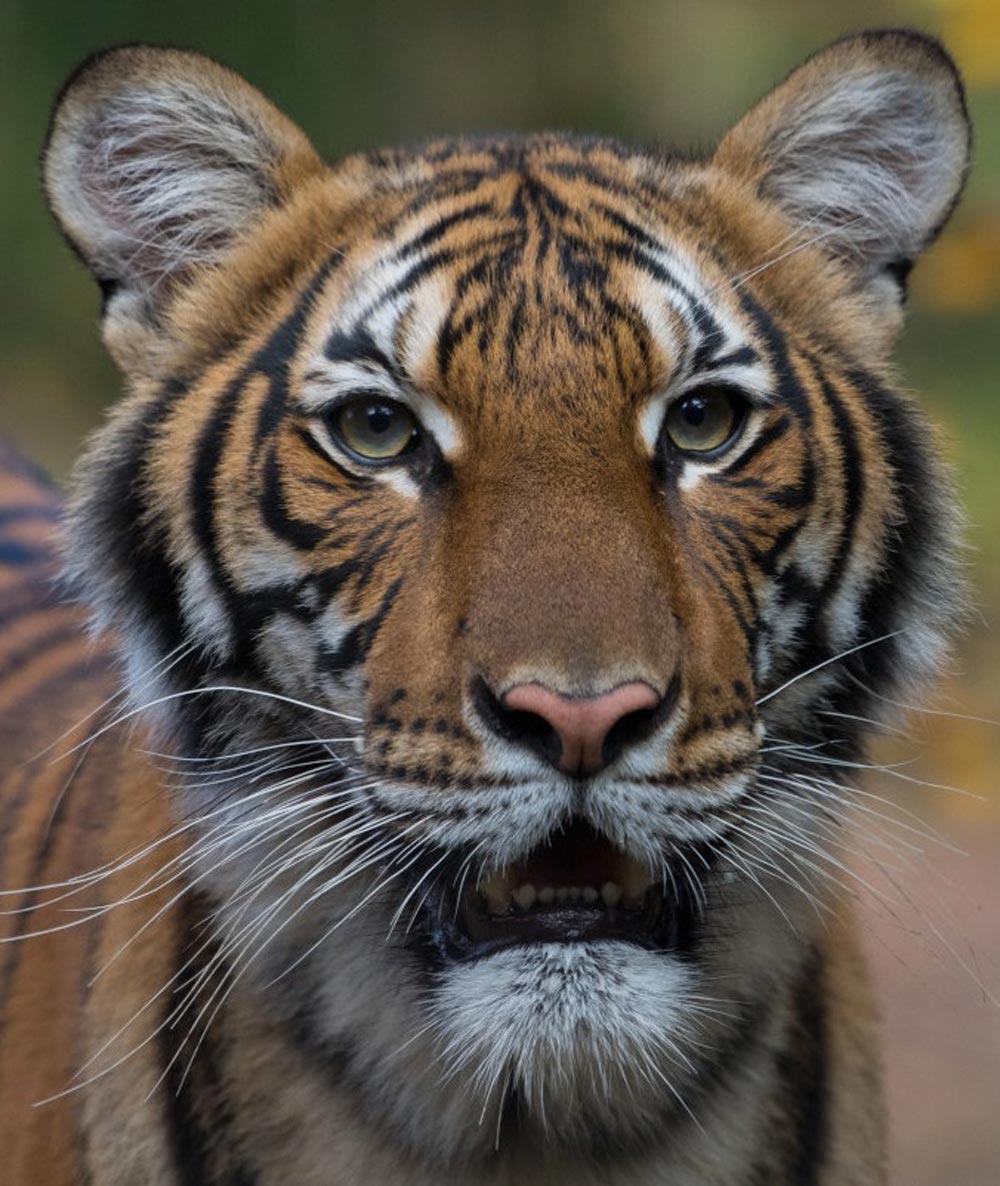 Nadia, a Malayan tiger (Panthera tigris jacksoni), was the first of 8 big cats (five tigers, three lions) at the Bronx Zoo to test positive for COVID-19. All of the cats have fully recovered. This portrait of Nadia was featured in news outlets around the world.

The WCS Global Conservation Program highlighted its year in 10 stunning photos and an honorable mention, as well. 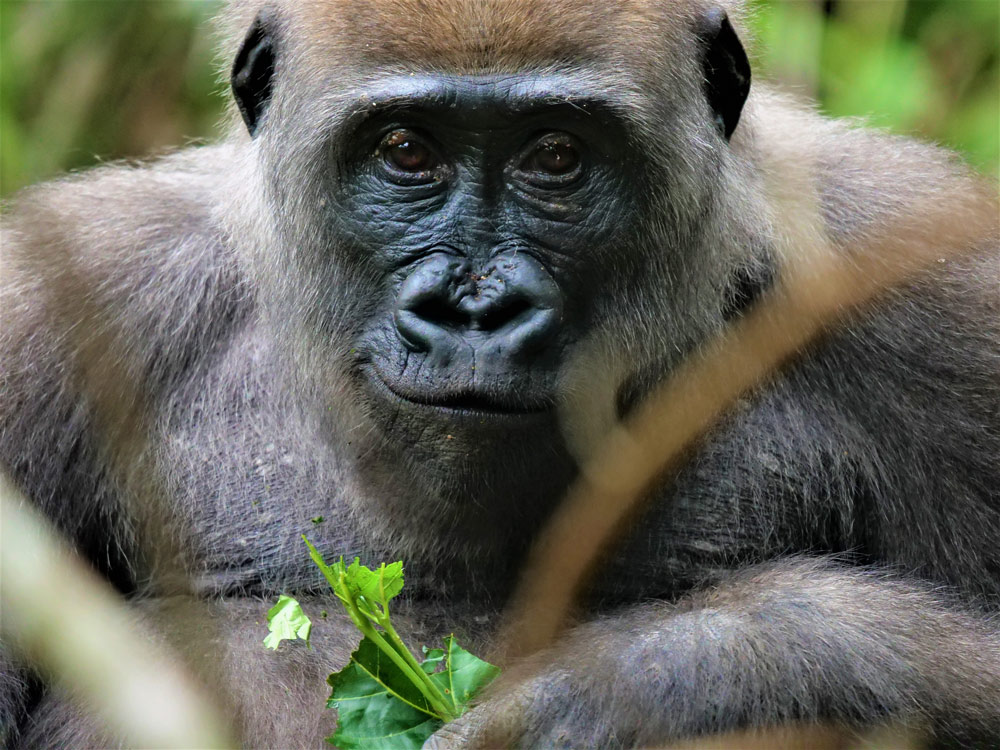 Keseke, a five-year-old male western lowland gorilla (Gorilla gorilla gorilla) living at the border of Nouabalé-Ndoki National Park, which WCS helps manage in the Republic of Congo. He is the son of silverback Buka and mother Mapassa and is often seen wrestling with his older brother Paki Paki. They are habituated gorillas that WCS studies in its research center in Mondika, which celebrated its 25th birthday this year. 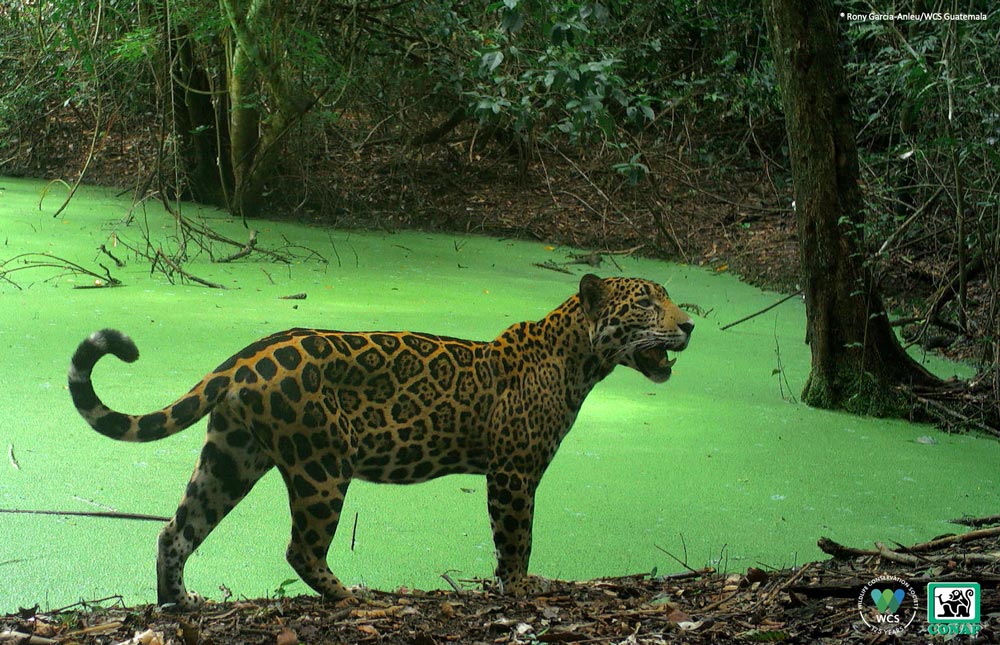 This stunning image of a jaguar (Panthera onca) in a watering hole was taken in Laguna del Tigre National Park in August by a camera trap deployed by WCS conservationists. It was part of a survey for the evaluation of jaguar density and biodiversity of the park. 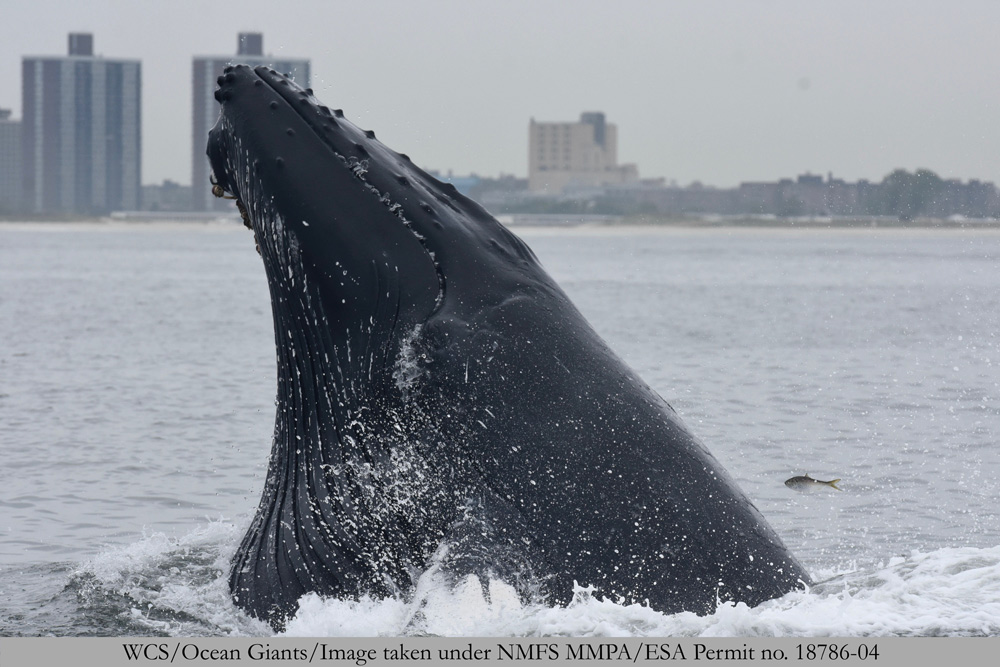 WCS’s Ocean Giants team captured this amazing moment of a humpback whale lunge feeding off New York City, and one member of the schooling fish (Atlantic Menhaden) that seemingly managed to escape for the moment. 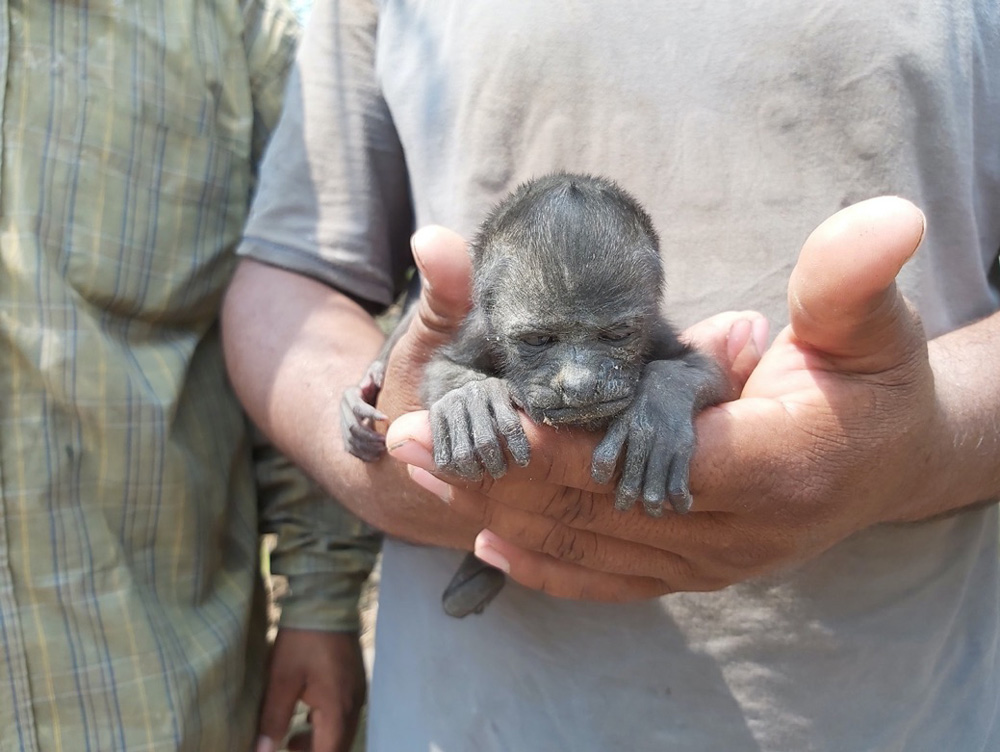 Last April for an Earth Day feature called “Seeing is Believing” WCS released this image of a baby black howler monkey (Alouatta caraya) rescued in Guatemala’s Maya Biosphere Reserve after fires ravaged its forest home. When the young monkey’s mother could not be found, it was sent by CONAP (Guatemala National Council of Protected Areas) to the ARCAS Wildlife Rescue Center for care and growth so it can returned to the wild. 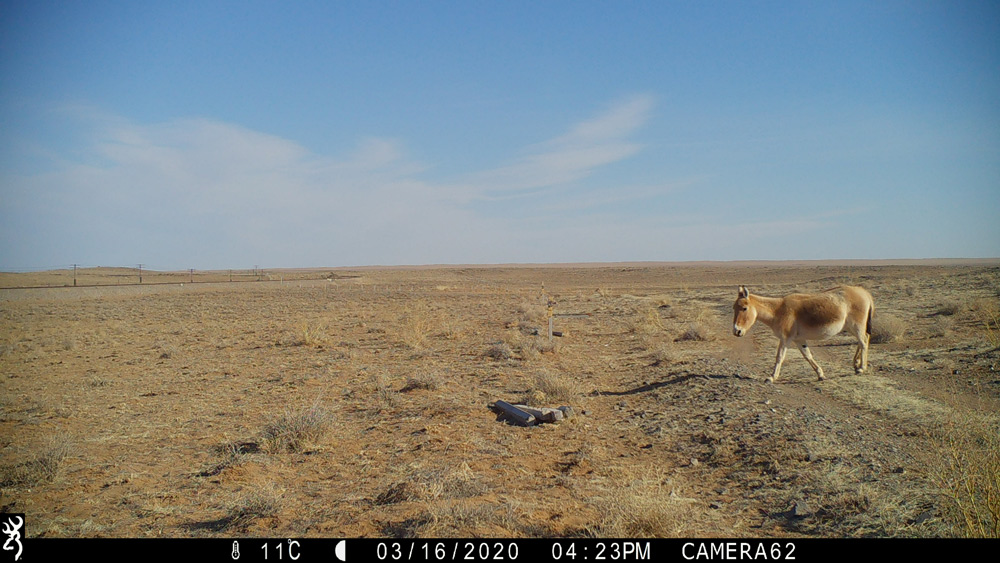 The WCS Mongolia Program released this photo in June showing a single Asiatic wild ass or khulan (Equus hemionus hemionus) crossing a previously impenetrable barrier along the Trans Mongolian Railroad – the first known crossing by this near-threatened species into the eastern steppe in 65 years. The crossing was part of the new Trans Mongolian Railroad ‘Wildlife Friendly’ Fence Corridor, a project that creates simple modifications to existing fence designs that run the length of the railroad. 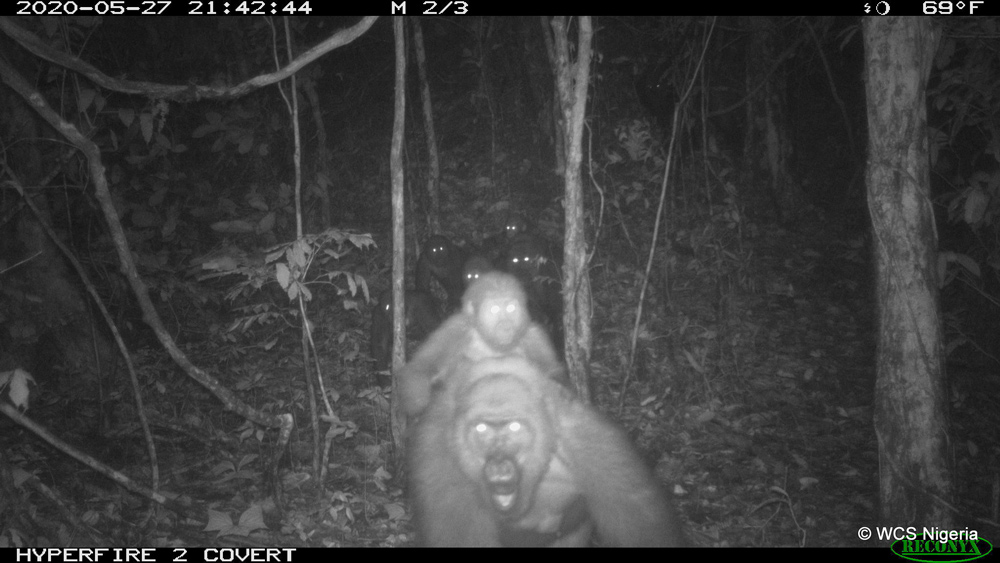 In May, WCS Nigeria took camera trap images of a group of Cross River gorillas (Gorilla gorilla diehli) including the first known images of adults and young of different ages. WCS works with local communities to safeguard this rarest gorilla species, which numbers only around 300 individuals living in an isolated region along the Nigeria/Cameroon border.


4. Okapi in the Wildlife Reserve 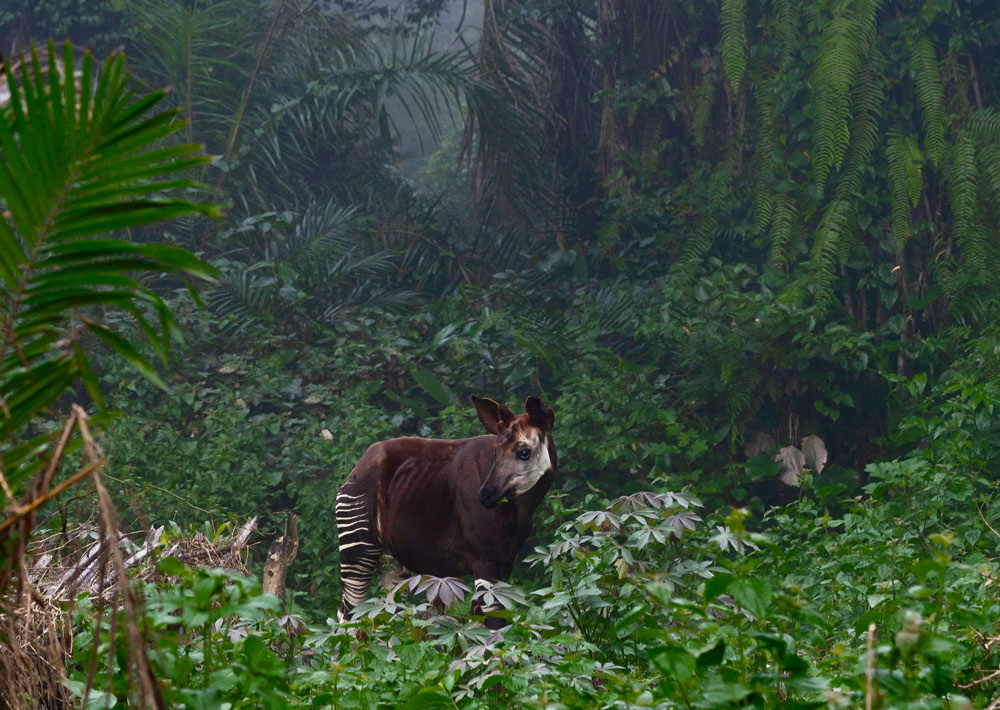 In November, a WCS staff member took this beautiful image of an okapi (Okapia johnstoni) in the Okapi Wildlife Reserve (OWR) in Democratic Republic of Congo. Okapi are rarely seen in the wild; good pics of them are ever rarer. WCS manages OWR and works to protect it from illegal mining, bushmeat hunting, and habitat loss from illegal settlements. 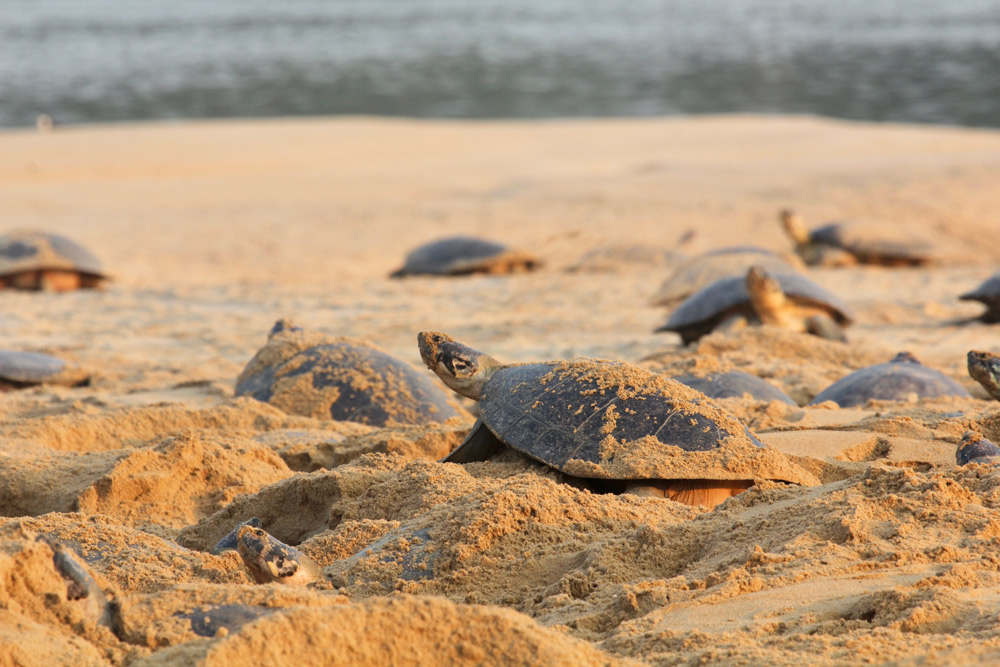 Last month, WCS documented a mass hatching event of Amazon giant river turtles (Podocnemis expansa) from a protected area in Brazil where up to 100,000 hatchlings emerged from their nests and headed for the Purus River. Months earlier, hundreds of adult females dug their nests along sandbars to lay their eggs. 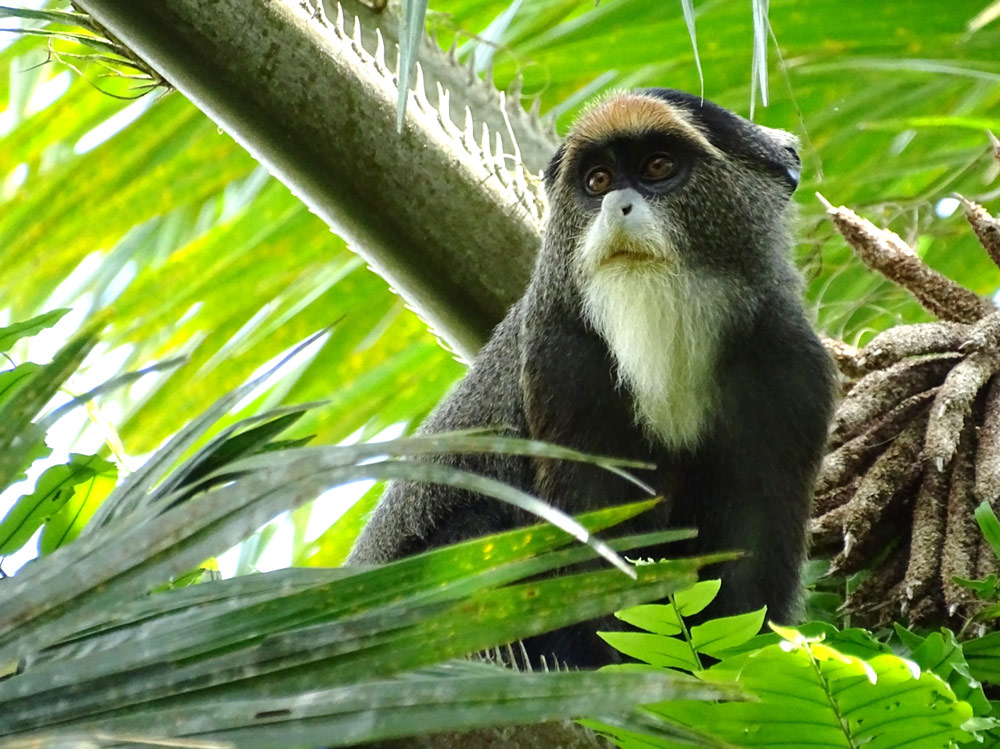 A Debrazza’s monkey (Cercopithecus neglectus) photographed near the park headquarters of the Okapi Wildlife Reserve in Democratic Republic of Congo.  Eighteen primates live in this vast protected area, which WCS manages. 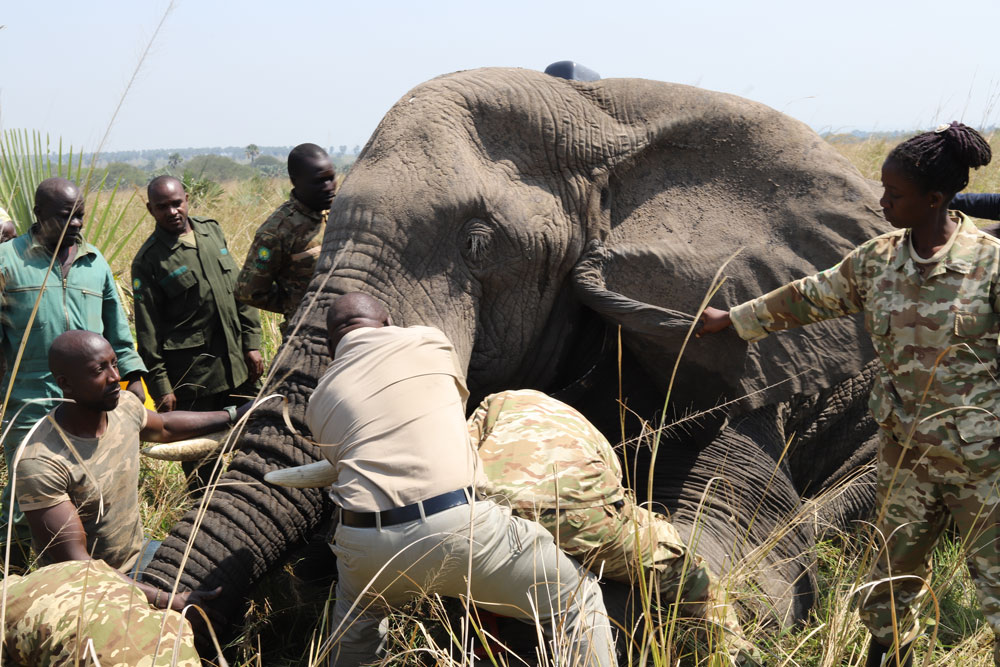 WCS Uganda and the Uganda Wildlife Authority collared 15 elephants (Loxodonta Africana) in Murchinson Falls National Park in January. The collars will help WCS monitor the elephants’ movements and health and plan daily patrols to reduce poaching. WCS fought against a proposal to build a dam in Murchinson Falls. The plan was recently rejected by Ugandan lawmakers. 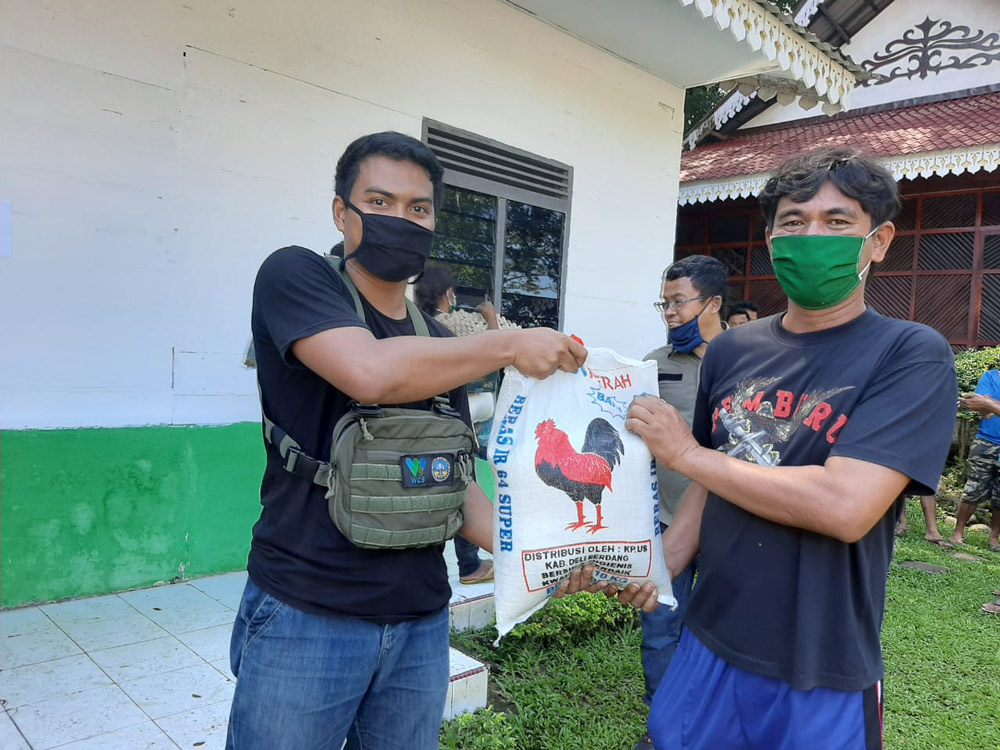 WCS-Indonesia Program’s Afrizal Maula Alfarisi, a wildlife response unit coordinator, providing rice to a tour guide in Bahorok village in Northern Sumatra near Mt. Leuser National Park. WCS assisted local communities wherever possible due to the impact of the COVID-19 on tourism, which closed many parks temporarily.

In each of these categories, the images curated by WCS staff underline the importance of conservation during a time when many species are facing extinction. Programs supports by WCS and the Bronx Zoo are helping to save these animals for future generations.