The drylands of Kenya’s Tsavo West National Park live up to their name.

Severe drought has become a common occurrence in this region, leaving wild animals like buffalo, antelope, zebras and elephants without water for weeks, even months.

“We aren’t receiving rain the way we used to,” says 41-year-old pea farmer Patrick Kilonzo Mwalua. “From last year, from June, there was no rain completely.”

Also known as “The Water Man,” Mwalua has taken it upon himself to deliver clean water to thirsty wild animals. A serious undertaking that Mwalua reasons is absolutely necessary.

“I started giving animals water because I thought, ‘If I don’t do that they will die.'” 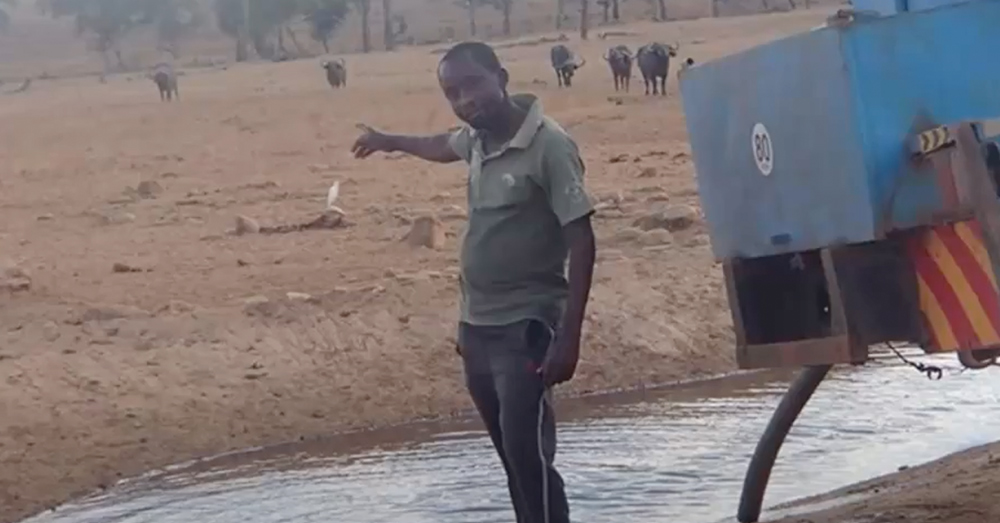 Source: YouTube/
Protect All Wildlife
Patrick Kilonzo Mwalua is known as the Water Man of Kenya.

Mwalua drives a truck that can carry 3,000 gallons of water around Kenya’s desert plains, making stops at popular watering holes. Every truckload of water costs about $250.

“The truck is heavy and doesn’t go very fast,” he says. “We have to be very patient and go deliver water.” 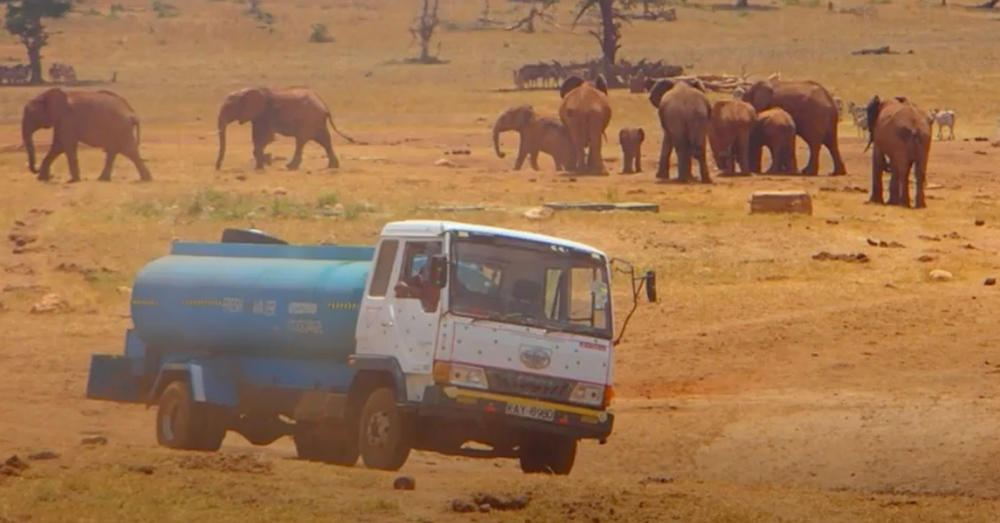 Source: YouTube/
Protect All Wildlife
Mwalua’s truck can carry 3,000 gallons of water, which he delivers to regional water holes.

According to the Dodo, Mwalua drives for hours between water holes in the region. When those are too polluted with buffalo droppings, he sets his hose down on the dry ground for the animals to play with.

“The buffalo roll in the mud so they suffocate the fleas and ticks,” he told the Dodo.

When the animals hear the familiar rumble of Mwalua’s truck, they come our of hiding, looking for their friend the Water Man. 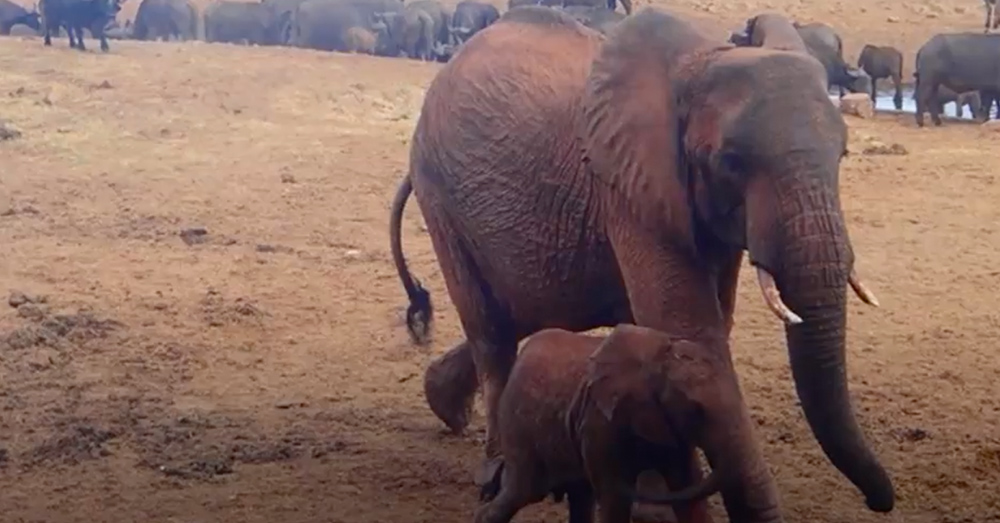 Source: YouTube/
Protect All Wildlife
Elephants, antelope, zebra and other wildlife come running for water when they see or hear Mwalua’s truck.

“Last night, I found 500 buffalo waiting at the water hole,” he says. “When I arrived they could smell the water. The buffalo were so keen and coming close to us. They started drinking water while I was standing there. They get so excited.”

Mwalua’s homeland is experiencing the worst effects of the climate crisis. The ground has become dry and hard, unable to sustain life. That leaves water to evaporate or stagnate on the surface, festering in brown pools while regional wildlife die of thirst. 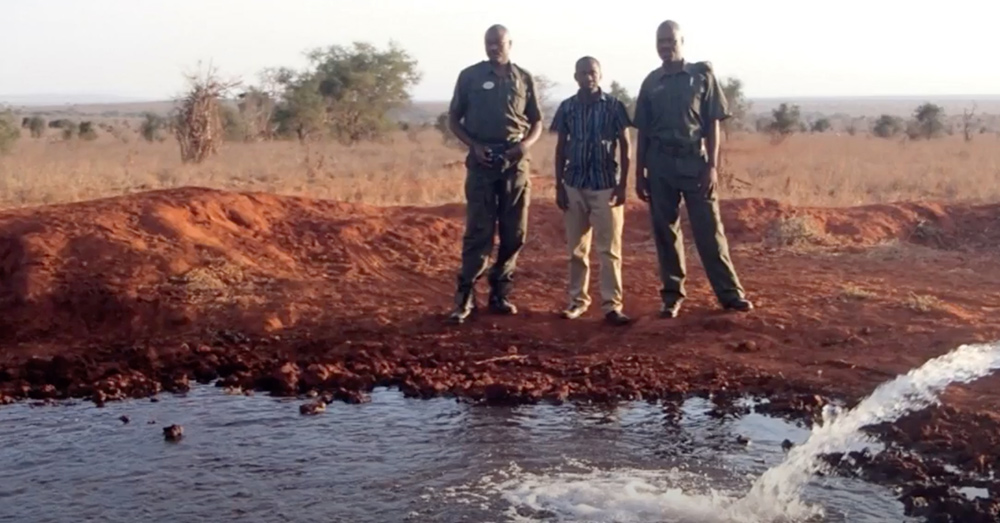 Source: YouTube/
Protect All Wildlife
Severe droughts have dried up the once flourishing plains of Kenya.

As a pea farmer, Mwalua remembers a time when it was much easier to grow a crop, and much easier for wildlife to find potable water. He shares these stories and the water management strategies he’s learned with local school children and a conservation group called the Tsavo Volunteers.

“I was born around here and grew up with wildlife and got a lot of passion about wildlife,” he says. “I decided to bring awareness to this so when they grow up they can protect their wildlife.” 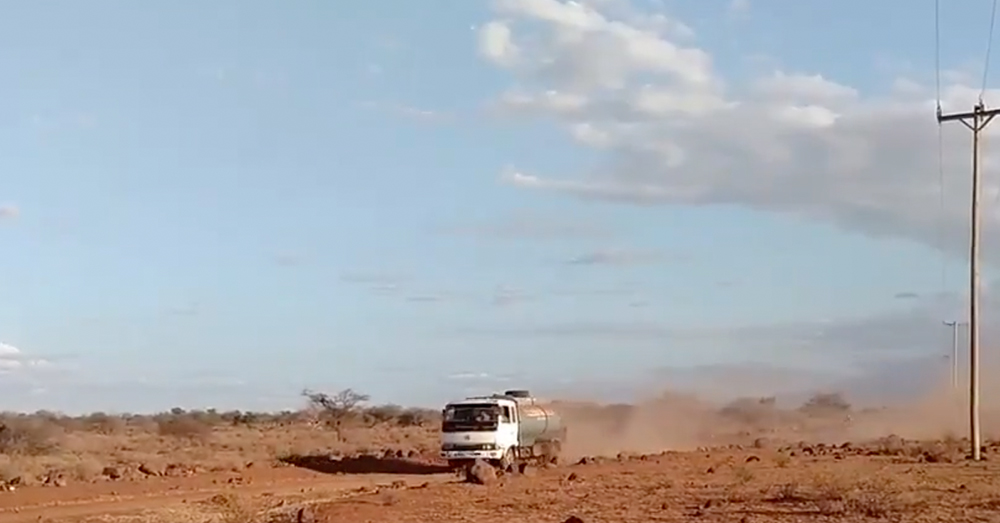 Mwalua’s message has impacted many in Kenya, and even a few in the United States. A woman from Utah named Cher Callaway has been sharing new of Mwalua’s work on social media. Callaway worked with Mwalua on multiple conservation projects, but thought his work as the Water Man deserved the most attention, so she set up a fundraising page to support the water delivery service. 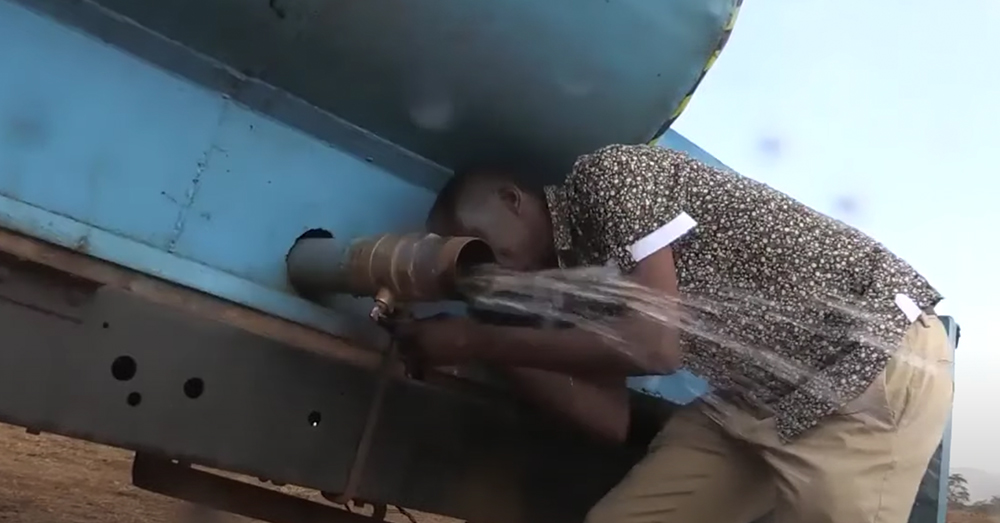 Source: YouTube/
Protect All Wildlife
Thanks to this one man, countless animals may be saved from dying of thirst.

“His commitment to the wildlife and his heritage is unmeasurable,” Callaway told The Dodo. “Even risking his own life in the middle of the night to deliver water to a dry water hole.”

Callaway and her network have so far raised close to $20,000, which they plan to put toward a new truck for the Water Man.

Tennessee Wildlife Resource Agency Officer And Rescued Goose Are Two Birds Of A Feather: Click “Next” below!