Too Ugly To Adopt? Romeo’s Story Couldn’t be More Beautiful

Quick to judge a book by its cover, many people passed Romeo off as a deformed stray roaming the streets of Southeastern Spain. But since images of this ginger kitten have reached the internet, the rest of the world, and his new owner, are now star-crossed with his indomitable spirit, and playful presence.

The first few months of life on the street for the stray Romeo were anything but storybook. His siblings had all been adopted, and Romeo, deemed “too ugly” was tragically left to fend for himself.

But then, while walking through town, Laura Llácer, director and co-founder of Santuario Compasión Animal, caught a glimpse of Romeo and fell in love.

Llácer brought Romeo back to Santuario Compasión Animal, fed him, cleaned him up, and introduced him to the other animals at the sanctuary. One of his new favorite toys is a stuffed bunny.

“They told us that no one wanted him because he was ugly. But for us Romeo is not ugly, he’s a lovely little kitten who likes to play like the rest of the cats. And their differences make them special,” Llácer posted to Facebook.

Romeo’s deformity makes him unique, not just among his new dog, pig, and sheep friends, but to the entire world. In a time of politically charged anxiety with every news cycle, Romeo stands out as a furry ginger ray of love and compassion.

“Romeo is very, very affectionate and behaves differently than other cats,” Llácer told the Dodo. “He remains a cat, but there’s something adorable in his behavior that reflects that lovely abnormality in appearance. 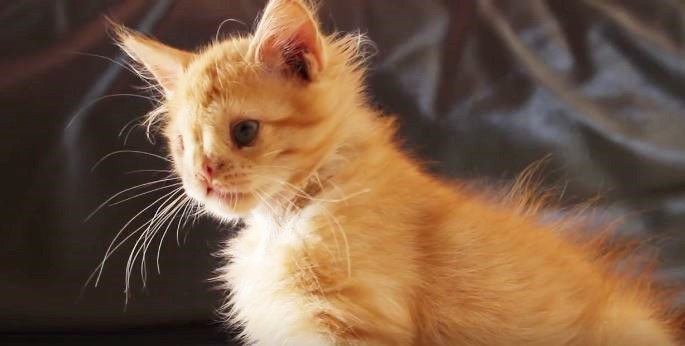 There’s no doubt Romeo’s tale will unfold without any further tragedy but unfortunately the same cannot be said for the animals of women who are caught in abusive relationships. Help victims and their pets safely escape abuse together. Follow the button below to empower victims to save themselves, their children, and their pets.

Domestic abuse victims shouldn’t have to make the terrible choice between leaving to save themselves and their children and leaving their pets behind with an abusive partner.

Help us build a safe haven!
Make a difference