Give Paul Robertson an open stretch of highway and he’s right at home. Inside the cab of his rig, so is Percy, his feline friend.

After a bout of food poisoning, Robertson pulled off his route to get some rest. He left the truck running, and when he awoke hours later, noticed Percy was missing. 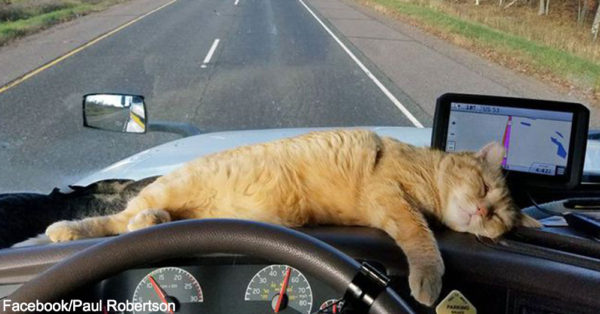 “When I woke, the electric window by Percy’s perch was open,” Robertson posted. “And Percy is gone. He wasn’t stolen, he did this once before, when I first adopted him. But never since. And this is the worst possible day. I’ve been searching this rest area now ever since, calling his name and rattling his dry food bag. Nothing. I have no idea when he got out. He could be miles away.”

Robertson spent hours searching for Percy, to no avail. He eventually had to return to his schedule and leave the area, saddened by the loss.

The next few hundred miles would be long, and the weather unforgiving. Robertson steered through bad roads, snow, and rain to make one of his scheduled deliveries. 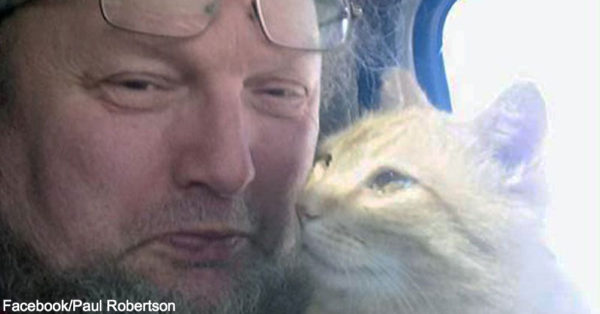 On the way back to his truck, he found some loose cargo.

Percy, muddy and cold, emerged from under the truck, where he had been since Robertson first pulled over to rest.

“I scooped him up and we were soon back together in the truck, cuddling and hugging and purring and happy as can be,” Robertson wrote. “He’s now sitting in the driver’s seat, probably warm for the first time in 40 hours, belly full, snoozing peacefully. Although he reeks like an old tire I haven’t the heart to bathe him right now. Let the poor guy rest.”

With his furry friend helping navigate once again, Robertson was more than happy to share his thankfulness for those who helped along the way. While in a precarious position for several hundred miles, Percy managed to come out unscathed.

“I cannot begin to express how grateful I am to all of you for the outpouring of love and concern for this little pussycat,” Robertson posted. “I love thinking that he has so many aunties and uncles who care for him. And also, I hope everyone who pitched in to help in any way they could, whether it was offering moral support or to go and set out traps or help search … I hope you’re all fantastically proud of yourselves. This little orange furry soul means the world to me. Thank you for caring about him too.”

The pair have since gained national recognition, and that’s no problem for Percy, who seems to enjoy the limelight much more than the undercarriage.

In celebration of our feline friends, The Animal Rescue Site and GreaterGood have partnered with Fresh Step to provide litter for shelter cats and kittens. We need your help! Supporting cats in need has never been easier!