Rescued From A Dog Fighting Ring, This Pit Bull Found A Mom Who Was Practically Made For Him!

Todd is an adorable black pittie that was adopted by Rebecca Corry. And while his life is now filled with lots of fun and lots of love, he wasn’t always that lucky. Todd was rescued from a dog fighting ring where he was one of only two survivors, the other being his mother. His mom, Lucille passed away a few months after their rescue.

With such a sad and violent upbringing, it was a given that Todd would not be very trusting of humans. When Rebecca took him home, he was a very serious pup that seemed to not care about anyone or anything that was going on around him. But Rebecca was determined to help Todd loosen up. And she was definitely up to the task! 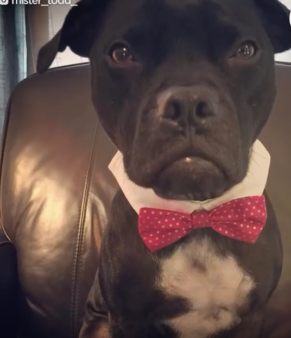 Rebecca is the founder of the Stand Up For Pits Foundation. The foundation focuses on educating others on pit bulls and advocating for their rights. Rebecca claimed that the inspiration for her foundation was her pit bull Angel. And though Angel has since passed on, Rebecca still works towards helping these misunderstood creatures. So Todd was definitely in good hands.

It took a lot of time and a lot of patience, but Todd has slowly begun to open up more. He has become less serious and started to finally be the playful pittie that he should have been all along!