This Tiny Pup Riding A Pony Will Make Your Day!

Hoomans aren’t the only ones who could ride horses and ponies…clearly dogs can too!

This tiny, adorable puppy is going for a ride on this pony, and it could not be any cuter! He just sits there ever so still, letting the wind flap through his big ears as the pony walks around in circles. Towards the end, the pony picks up speed and the tiny pup starts bouncing around. We could only imagine what happens next! The pup is so tiny that the pony probably doesn’t even realize that something is on its back!

Buffalo Jumps On Trampoline In Family’s Backyard: Click “Next” below! 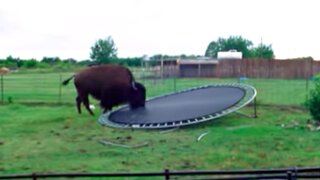 Zimbabwe Bans Mining In All National Parks After Public Outcry