When a 10-day kitten wound up at a veterinary clinic with severe injuries to her tail and hind leg, it was immediately clear she would need amputation. But although the kitten’s injuries demanded immediate attention, veterinarians also hesitated to operate on such a young feline. In addition to being 10 days old, this tiny kitten weighed less than a pound.

But veterinarians also realized they had to move forward in order to give this tiny kitten, Peggy, the chance to lead a full and healthy life. “The other option was euthanasia, but with how strong she was we were never gonna do that,” veterinary nurse Kate Hayes wrote on Instagram. “The only choice we had was to amputate her leg sooner rather than later as her leg was so badly infected and had started to essentially die risking her going into sepsis.”

Rescuers weren’t sure if Peggy (aka Peg leg) would survive the procedure, but they were pleasantly surprised to find this tiny kitten was a survivor. “I honestly didn’t think she would make it through surgery being so young and so small, but she did,” Hayes wrote. “She is an absolute superstar!! She is the youngest kitten we’ve ever done surgery never mind an big orthopedic surgery.”

Hayes took the kitten home to recover, where the tiny patient quickly bonded with her dog, Moon, a sentimental pup who loves helping his dog mom nurse furry patients back to health. “If an animal is crying or sick, Moon will stay beside them and cry with them,” Kate told Love Meow. “He has such a kind nature.” 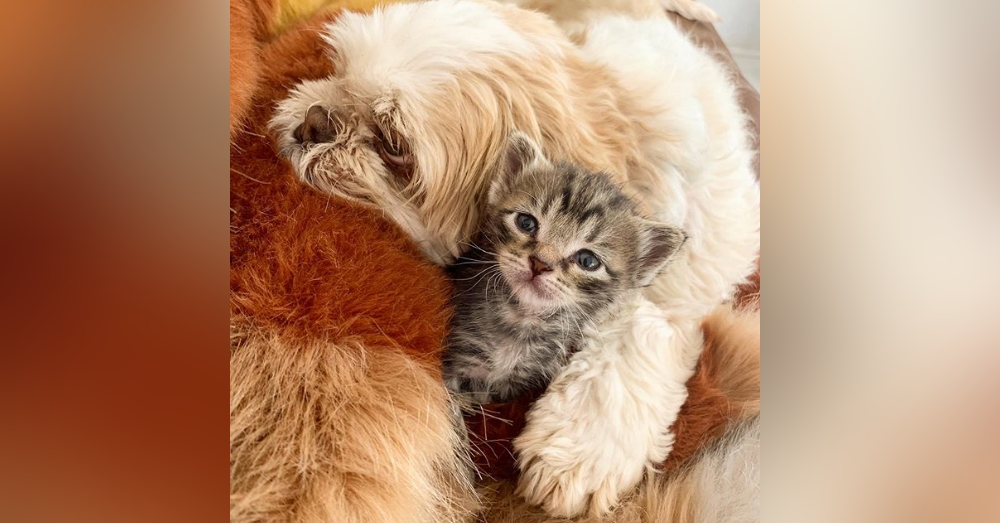 The loving dog gently sniffed Peggy a few times, then promptly curled up alongside the injured kitten’s side. Like any good nurse, the dog runs over whenever he hears Peggy crying, cuddles the kitten to sleep, and protects her at all times.

For her part, Peggy has been reveled in Moon’s unconditional love, which has helped the tiny kitten grow stronger by the day. Not only has the kitten put on some healthy weight, she’s has gotten more playful. Now Peggy makes muffins on her foster dog brother’s fur whenever she’s ready to snuggle. That’s what brothers are for!