A viral Tik-Tok video has been circulating when a teen stopped a dance video to rescue her dog that was drowning.

It happened when Cadence Beavers was filming a video for TikTok in Arizona. Everything was going along as you would expect as she was listening to “Gonna Get This” by Hannah Montana and doing her best dance moves. You can see her two dogs in the background as they wander around a swimming pool.

Suddenly, MJ, the black dog, jumps into the water and sinks under the surface. Beavers doesn’t hesitate, she takes off her shoes quickly and jumps into the pool fully dressed while the song continues playing. Within moments, she grabs the dog and helps her to the pool’s edge.

After being uploaded on TikTok, it has received millions of likes. Beavers captioned the video: “Omfg saved my dog and my shoes.” 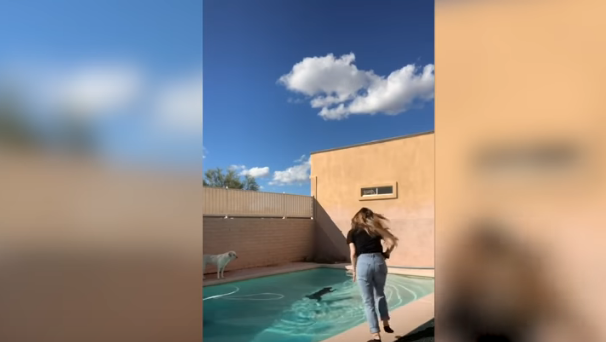 Most people seemed to agree. “At least u know she thinks fast on her feet,” one person said, “Bc I would be PANICKING.”

There were plenty of haters around but many were just concerned about MJ. Beavers gave an update on the dog in a few follow-up videos to let everyone know she was fine.

“Not only is my dog safe, but my shoes are also fine, my phone is fine,” Beavers said in the video. “I had no idea ’till that day that some dogs didn’t know how to swim, so whoever is mad because it was my natural instinct to take off my shoes before I jumped in, you can stay mad.”