This adorable black lab, aka Spud, plays a key role in helping his owner, John, propose to his girlfriend. During this touching video, Spud is given a very important task. That task? He has to bring a box containing the ring to his John’s girlfriend… the rest is up to John, Spud does his job spectacularly! Cutely, he trots up to his human mama and stays still long enough so that she can detach the ring box from his collar. And he did it all without eating the box (John apparently thought that would be a concern)!

People Are Making Charcuterie Boards For Their Dogs: Click “Next” below!

People Are Making Charcuterie Boards For Their Dogs 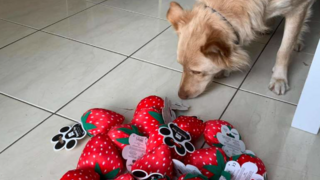