Everyone remembers wanting a pony as a kid. But for most of us that was never practical because it’s not like you could keep it in your backyard in the suburbs…Ponies don’t belong in a house. However, couple Elaine and John Sangster are breaking that belief and proving that in some instances, a pony does belong in a home – that is, a nursing home.

The husband-and-wife duo runs Therapy Ponies Scotland, an organization which aims to provide dementia patients and other patients of nursing homes and hospices throughout Scotland the opportunity to spend time with Shetland ponies. The adorable animals actually have restorative effects for the patients.
Elaine spoke to Horse and Hound and said, “You walk into their bedroom with a pony and their faces just light up. Sometimes you see people who never come out of their room sprinting down the corridor with their Zimmer frames!” 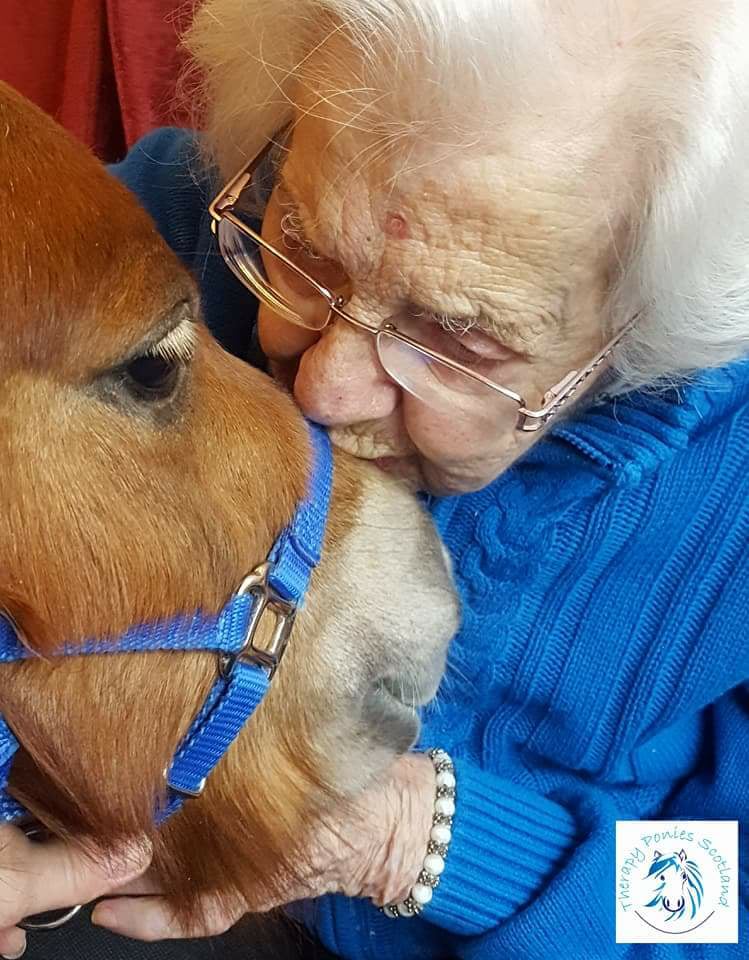 Nurse consultant for Alzheimer Scotland and the regional public healthcare board NHS Grampian, Lyn Irvine, has explained there are mental health benefits to spending time with the ponies.

“The interaction with the ponies often helps stimulate a positive social response … and minimizes stress and distress. The animals provide comfort, joy, and a sense of excitement,” she explained to Horse and Hound. 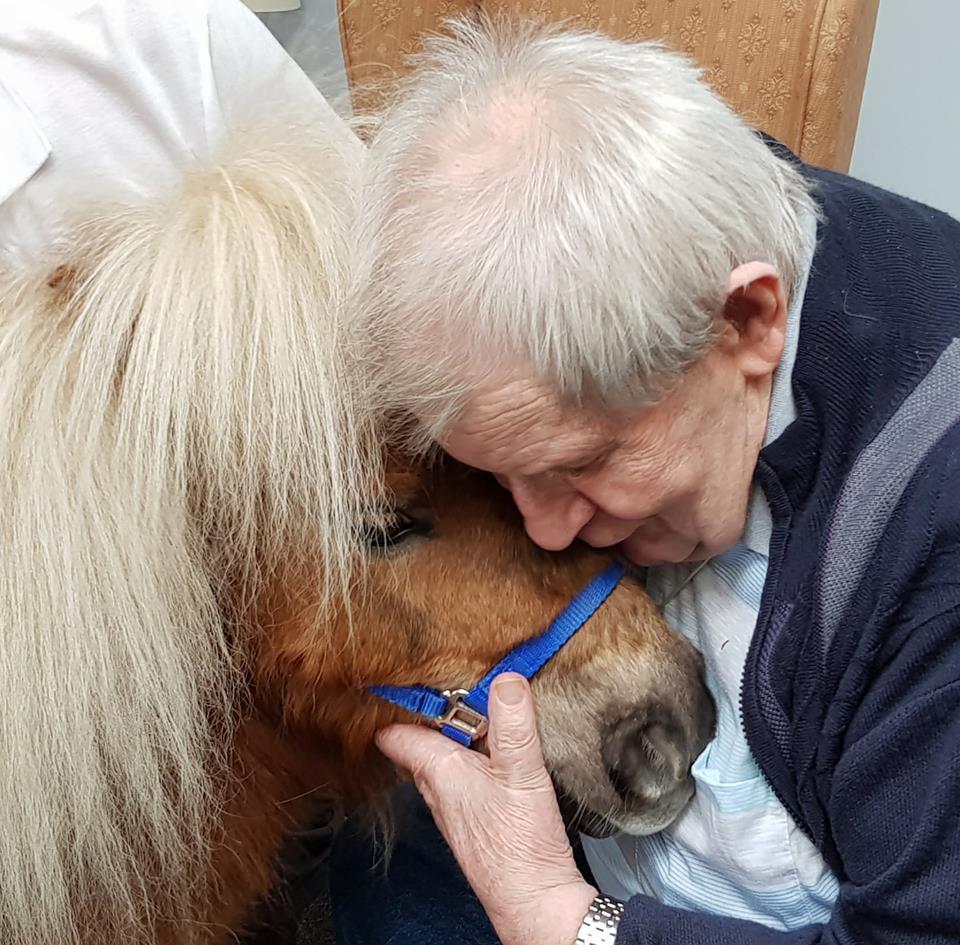 Not only do they help to boost the morale of the patients, but also that of the families. As Elaine explains, the patients’ relatives often plan their visits in order to coincide with the ponies’ visits.

Elaine also says that oftentimes, the facility’s staff aren’t quite sure what to expect of the Sangsters’ ponies prior to their first visit. That is completely understandable – most of us wouldn’t know what to do with eight Shetland ponies roaming around indoors. But the Sangsters have owned and managed a majority of the ponies since they were babies, so they have trained them to be comfortable and obedient indoors. They also keep them impeccably well-groomed. 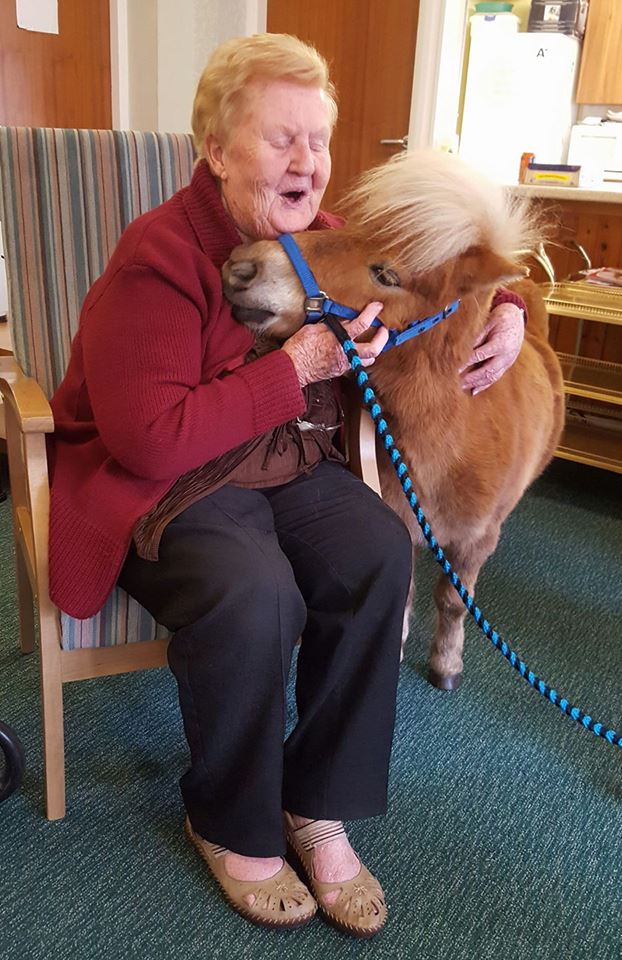 Elaine maintains that all the ponies are “teddy-bear soft to the touch and smell beautiful.” The couple also attaches little “whoops-a-daisy’ bags” to their rear ends so they don’t have any accidents while visiting patients.

“Every time we go into a care home people can’t believe how well-behaved and calm they are—we are so proud of them we could burst.”

Staff members at the facilities where the ponies visit, will often as John and Elaine for repeat bookings – sometimes even before the first visit has ended! 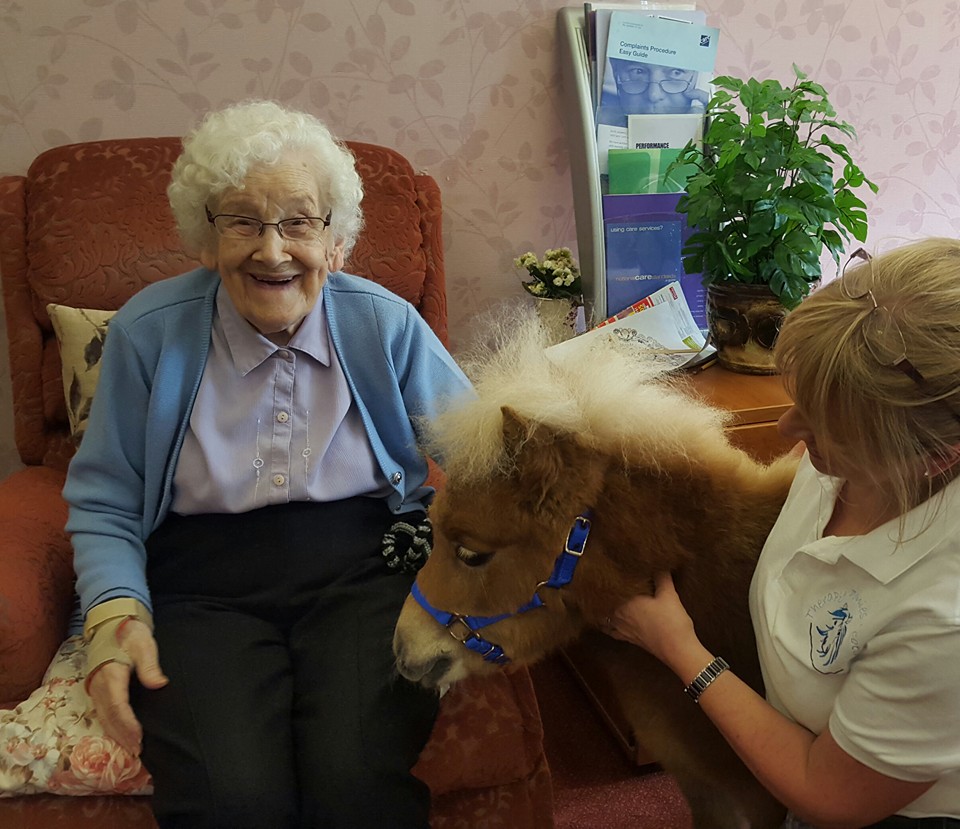 In total, the couple own fifteen ponies. But they usually only take eight per visit. This allows each animal to have a day off to do as they please out in their pens.

What a nice treat it must be for the old folks to get to experience some pony love. What do you think?