Awaiting Death At A Pound, She Had Given Up Hope. But She Had No Idea Her Life Was About To Change

This poor dog named Theia was living out her last few days at a public pound in Romania. She was emaciated, covered in fleas and ticks, and was going to be euthanized very soon. By the looks of her, she had definitely given up hope. Thankfully, Howl Of A Dog, a nonprofit animal rescue organization, saved her just in the nick of time!

When they first rescued Theia, she was so weak and fragile that they were afraid to touch her. They gave her the proper medical treatments and intensive care, and after just two months, she looked like a completely different dog! She had doubled her initial body weight. She was happy and healthy and had rediscovered her joy of running and playing with other dogs. Now she gets to spend her days with her new doggy friends, sleeping in a comfy bed, and most importantly, getting all of the love and care that she deserves!

Since her rescue, Theia has become an important member of the Howl Of A Dog family and is now a therapy dog!

Watch her amazing transformation below:

Ariel Winter and Boyfriend Luke Benward Adopt Rescue Dog With The Most Mesmerizing Blue Eyes: Click “Next” below! 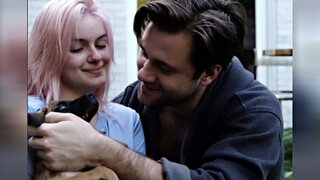