When Eddie, a rescued dog from Pasco, Washington, joined the police as an honorary k-9 officer, the local community welcomed the pooch with toys, money and donuts to celebrate his first day on the job.

But Eddie hasn’t always enjoyed such warm treatment from people. After being abandoned by his owner, the dog spent almost a month wandering the streets, evading multiple attempts by worried rescuers to bring the dog in. 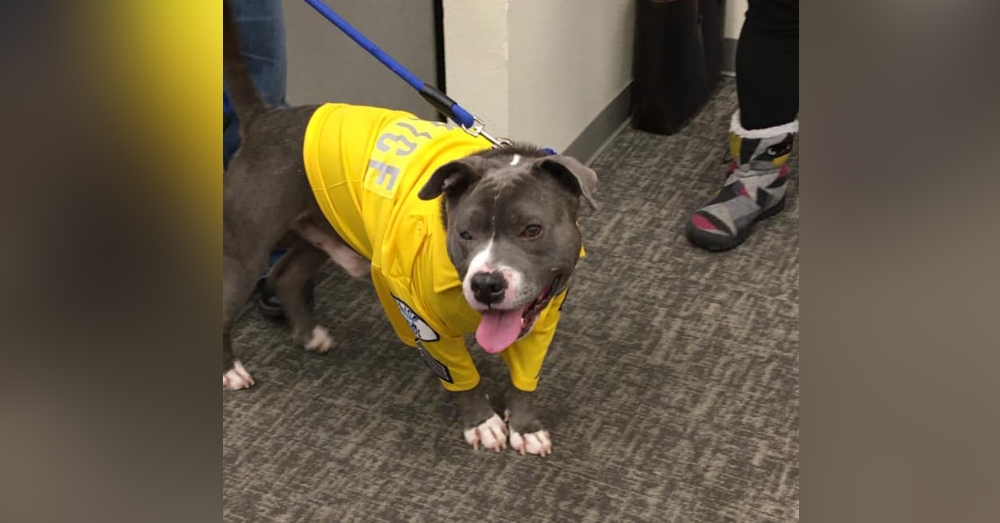 When Eddie was finally rescued, the poor dog’s fortunes would grow even more bleak. “We thought he had been hit by a car,” one of the animal control officers, Carin Brown, told CNN affiliate HLN. “We rushed him to the vet and we discovered that he, unfortunately, had cancer.”

Nor was the dog’s condition even treatable. After discovering an inoperable tumor that made him blind in one eye, veterinarians decided that Eddie probably only had 6 to 12 months left to live.

That’s when rescuers came up with a new plan. Rather than simply accepting Eddie’s fate, they would create a bucket list of dog-friendly adventures, ensuring this neglected pooch thoroughly enjoyed the short time he had left. 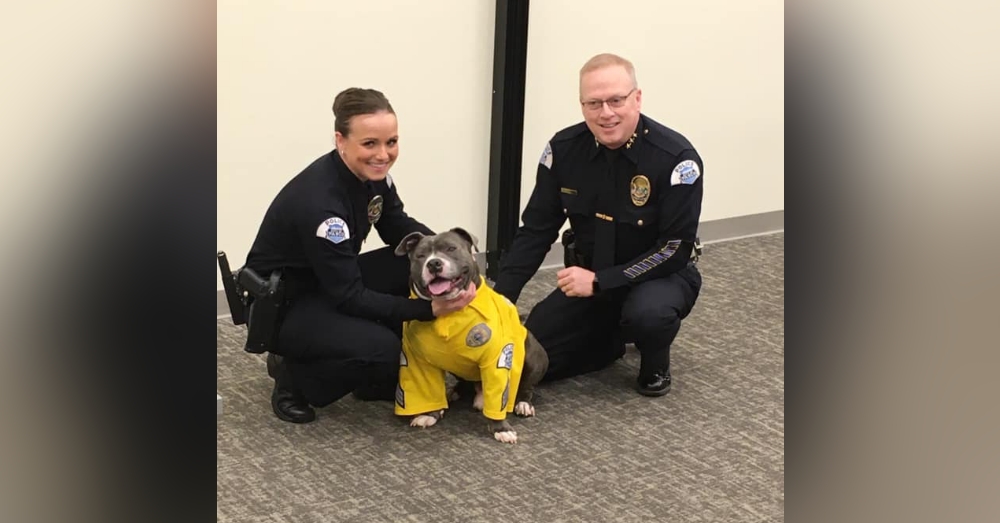 “He’s just the best dog, so friendly, so well-behaved, he knows all of his commands, he’s just the sweetest thing,” said Brown, who would later enlist a friend to become Eddie’s lifelong foster parent. “He deserves six months to a year of all the love and happiness that we can give him.”

Before long, rescuers had compiled a long list of dog-friendly adventures to keep Eddie busy in his final days – pictures with Santa, lounging in a pool filled with toys, riding in a motorcycle side car, and participating in a kissing booth, which would allow this previously neglected pooch — who spent so many years unloved and neglected –to make up for lost time by planting slobbery dog kisses on a friendly rotation of humans. 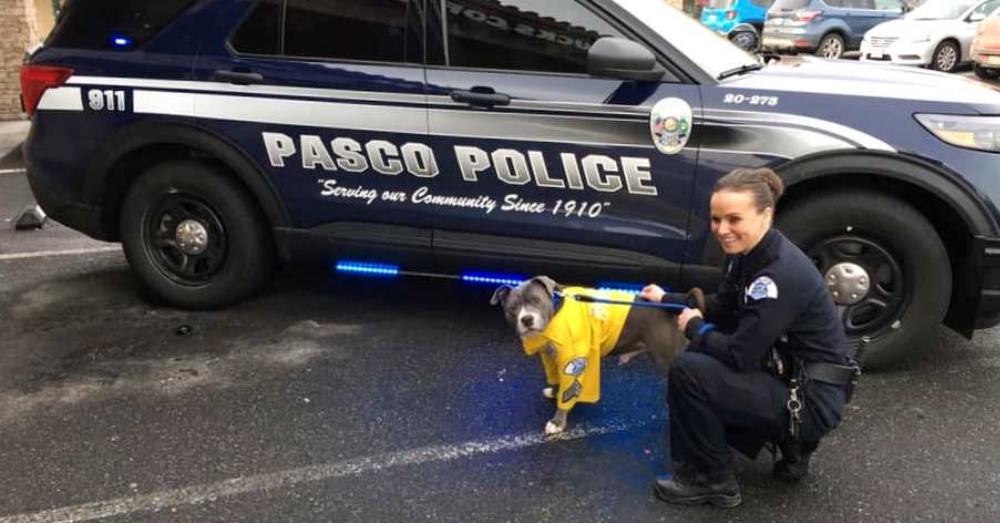 Eddie’s foster mom, Kristi Kesler, also reached out to the local police station, just in case officers might be willing to let Eddie ride in a police car. “I thought maybe he might get his picture taken with an officer in a car, I thought maybe if he were lucky, he might go for a car ride, but I never dreamed it would be this big for him,” Kesler told CNN affiliate KEPR.

But the men and women in blue took Kesler’s suggestion even further by making Eddie an honorary K-9 for the day. The terminally ill dog was even treated to a custom uniform with real police patches and a swearing-in ceremony. “We believe in helping people and that also means helping animals in our community, so we have all come together as a family and are all fighting alongside Eddie,” Pasco police Detective Julie Lee said. 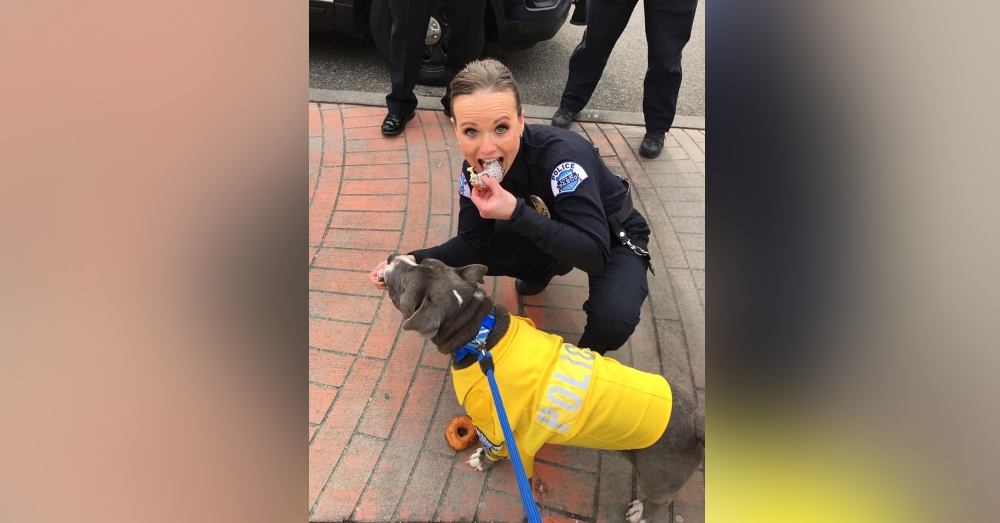 Officers made several stops with their new K-9 partner that day, including a visit to a local donut shop and an auto body shop where the ailing dog was presented with treats, toys, and a donation to his veterinary fund. “He is just such a lover. You would never suspect that he was abused or neglected,” Detective Lee said. 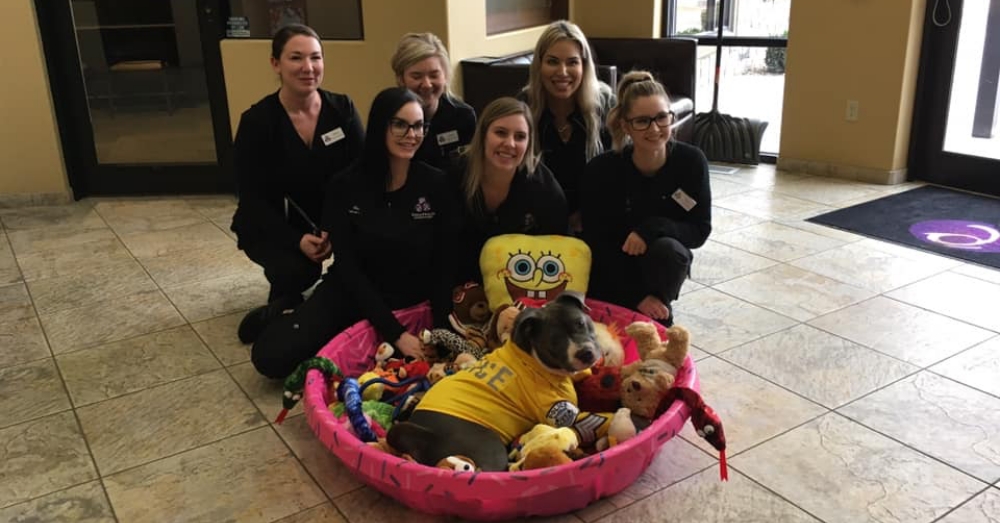 Meanwhile, Eddie’s rescuers were truly moved by the sheer numbers of people eager to help shower the dog with love and affection in his final days. “These people who’ve really stepped up and said we want to make a difference in this dog’s life — it’s meant the world to know that people still do care,” Eddie’s foster mom, Kristi Kesler said.

The animal control officer, Carin Brown, was similarly moved by the outpouring of support. “It’s amazing … in this little tiny community that so many people have said, you know, ‘He’s worth it, he’s worth the chance.'”