As Swedes mourned the four who died in a terrorist attack with flowers and candles, one man noticed there was nothing placed on the spot where a fifth victim had lost his life. Now his small act of selflessness has gained worldwide attention and lifted the spirits of a nation in sorrow.

On Friday, April 7, a 39-year-old Uzbek national who was denied asylum in Sweden in 2016 hijacked a beer truck and rammed it into pedestrians in a Stockholm shopping district, killing four people and a dog named “Iggy” and injuring several more.

“I saw hundreds of people running. They ran for their lives,” a witness named Anna told the Aftonbladet.

Another witness, Dimitris, said the truck came out of nowhere as he was walking down the busy Stockholm street.

“I could not see if anyone was driving it, but it seemed out of control,” he said. “I saw at least two people being run over. I ran as fast as I could away from there.”

Swedish prime minister Stefan Löfven declared the incident an attack on Sweden, and after the swift manhunt for Rakhmat Akilov concluded, the suspect pleaded guilty to terror acts by murder later the same day.

By Monday, people in Sweden had gathered to honor the lives of those who died in the attack by placing remembrances on the street side. Marcus Krantz, a Stockholm resident, saw that nothing had been placed on the site where Iggy had died. His memorial for the animal sparked attention and then worldwide praise as many more were able to express their heartbreak and sorrow in unison with those in Sweden.

“I saw no one put a flower or lit a candle in the place where the poor dog was killed during Friday’s attack,” Krantz posted to Facebook. “So we gave him our own little memorial. The collar belonged to my first dog, Ebba, who passed away this summer.”

Krantz currently has five dogs, all rescued from Romania, so he understands how the animals appreciate even the simplest gestures. His is being appreciated now too.

“My mom asked me to take a picture and send it to her, and since it went online, the response has been 100 percent positive. Just pure love,” Krantz told the BBC. 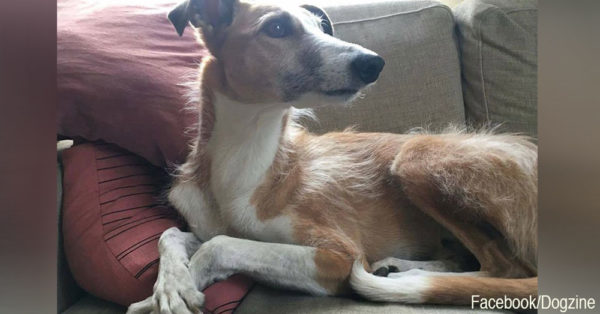 After Krantz’s initial post went viral, Krantz was contacted by Dogs Aid, the Irish non-profit rescue shelter that had connected Iggy with his new home in Sweden in 2012. Iggy had left just as large a mark on their hearts as he had Krantz’s.

“R.I.P. beautiful, special boy. Run to the Bridge dear one, all of your Dogs Aid friends will be waiting for you,” Dogs Aid posted to Facebook. “One hundred thousand stars will light your way. Our thoughts are with IGGY’S family. They loved him so much and gave him the best life imaginable. His family would like privacy at this sad and traumatic time.”

The Animal Rescue Site wishes the best to Iggy’s family and to all who were affected by the April 7th incident. The unexpected loss of a loved one is a painful process to go through, and it takes time to heal. In the United States, one company is helping animal lovers memorialize their pets with unique and vibrant portraits. Click the button below to read more.