Tiny Sweaters Are Saving The Lives of Adorable Penguins!

Alfie Date began knitting in 1932 when he was just twenty-six years old, but it wasn’t until 2013 when Australia’s oldest man began to knit sweaters for Phillip Island’s little penguin population.

The penguins, who were still being impacted by an oil spill that occurred in 2001, had been unintentionally swallowing dangerous and toxic chemicals as they attempted to clean the oil off their feathers. When he heard about the Penguin Foundation of Phillip Island’s call for knitters to create “jumpers” for the flightless birds, the 109-year-old Alfie put his eighty-plus years of experience to work.

Phillip Island is home to about 32,000 little penguins. They are the smallest penguins in the world (and cutest), and the only species with blue (rather than black) and white feathers as an adult. 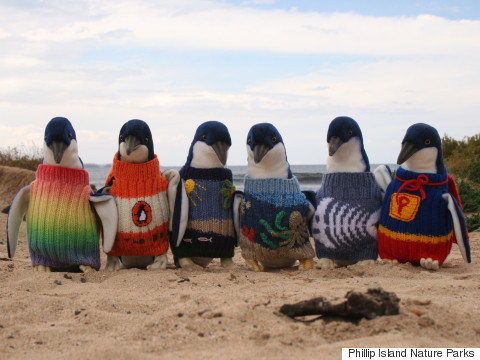 Their feathers are waterproof when clean, but when oiled they can separate and leave the penguin open to exposure. The sweaters, besides preventing the penguins from swallowing toxic oil, keep the little penguins warm, dry, and snuggly, and ultimately keep them alive. Not to mention, they are completely and utterly adorable!

Original posting from our sister site The Animal Rescue Site.