Residents of South Padre Island, Texas, are coming together to help save stunned sea turtles after a brutal winter storm hit the area.

As the water temperature dropped below 50 degrees, the endangered sea turtles started to float to the surface unable to move or swim. This phenomenon is known as cold-stunning. If the turtles are not rescued or returned to warm water, they will become sick and die.

“Cold stunning may lead to shock, pneumonia, frostbite, and potentially death, as they are not able to migrate to warmer waters,” states Turtle Island Restoration Network.

Sea Turtles Inc., a local nonprofit turtle rescue, and volunteers have been out every single day since the frigid temperatures hit the area saving turtles. Their rescue facility quickly filled up, but the city stepped up and offered the South Padre Island Convention Center as an overflow area.

The community continues to brave the cold to rescue turtles and are using all forms of transportation.

A longtime volunteer, Gina McLellan, was one of many who loaded up their cars with stunned turtles. Her daughter Lara tweeted a photo of her mom’s Subaru loaded down with turtles and it went viral.

My mom is retired, & she spends her winters volunteering at a sea turtle rescue center in south Texas. The cold snap is stunning the local turtles & they’re doing a lot of rescues. She sent me this photo today of the back of her Subaru. It’s *literally* turtles all the way down. pic.twitter.com/xaDRNjLDoQ

She said her mom was “thrilled” by all the support and wanted to recognize all the other volunteers as well. Lara commented that rescuers even managed to save “one turtle yesterday who is over 100 years old and approximately 350 pounds!!!”

Rows of sea turtles slowly coming out of hypothermic shock line the rescue centers. Over 2,500 sea turtles have been rescued, but the number continues to grow. Residents that spot a turtle in need of help are asked to call the rescue’s emergency line 956-243-4361.

But all their work could be in vain if the power does not come back on soon.

Monday morning the rescue lost power and posted, “Sea Turtle Inc. has been without power since 2am and have exhausted our heating resources. Any individual or business in the South Padre / Port Isabel area that has an available generator please head on over to our facility and call our emergency stranding number 956-243-4361. We are in need of warmth for the sea turtles.”

Wendy Knight, executive director of the Sea Turtles Inc., said in a video that this is the largest cold-stun event the island has seen in more than a decade. She said the turtles will perish without heated water tanks. “We need our power back on.”

The rescue appreciates everyone’s support, but their work is far from over. They are asking people to donate and pray the power comes back on soon.

You can help by donating below to help save sea turtles affected by the deadly winter storms. 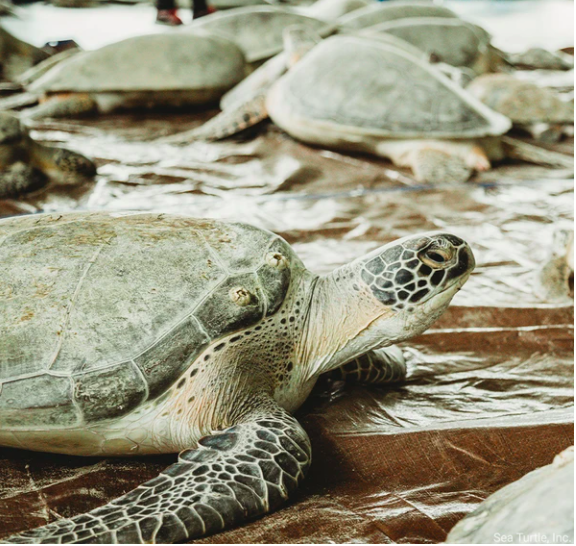 The brutal winter storms that hit Texas in recent days jeopardized the lives of more than 4,900 sea turtles on South Padre Island. Help us rush aid to these sea turtles to keep them alive.
We must act quickly!