There has been an ongoing feud between dogs and mailmen for quite some time. It seems as if one neighborhood stray doesn’t mind when the mailman comes around because that is when he makes his move.

A Texas family realized they were dealing with a package thief so they used footage from their doorbell camera to find out what was going on.

What the Garza family found when they reviewed the video is that it wasn’t a person stealing the packages, it was a dog! 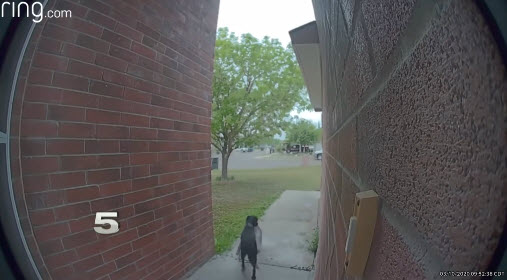 “It was kind of funny because nobody would ever expect a dog to steal a package,” Abby Garza, 10, told local television station, KRGV, of the neighborhood stray.

It seemed as if the dog had everything planned in advance on how the package would be stolen.

According to Garza, the dog comes around the McAllen, Texas neighborhood often. He hangs out, waiting for the mail person to leave the area before he makes his next move.

After making sure the coast is clear, the dog runs over to the door, takes a sniff, and then grabs the package before running away.

“The first package was my mom’s clothes, the second was my easter basket, he was chewing all over it,” Garza said.

Now that the news is out about this canine thief, most of the neighbors are more cautious about keeping their packages outside. They also are good about returning packages to the rightful owners if they find one left by the dog in another area.