Pets Have Been Badly Burned By Wildfires, But This Miracle Worker Is Helping Every Way She Can

When Steph Gediman saw a singed and suffering cat on the side of San Marcos Drive, she knew she had to help. As if moved by an invisible force, she rushed to the animal’s side and did what she could to comfort it.

Its paws were badly burnt, and its face and ears had been through even worse.

“I could tell even when I first found him that was where the most major damage was,” Gediman tells the Animal Rescue Site. “His ears looked like they had been boiled, and his face was covered with this hardened ash and burn wounds.”

Gediman has a little experience working in animal care, but she is by no means a skilled technician, she says.

“I worked at Pet Care Veterinarian Hospital in Santa Rosa for a few years,” she says. “It was actually a job I kind of fell into by chance and had no knowledge going into it. That job taught me a lot though. I have seen death in the worst of situations and life at its most beautiful there.” 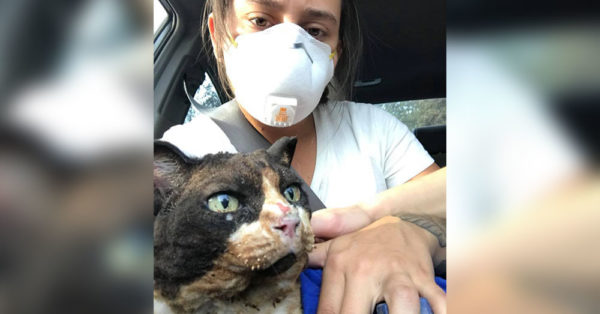 California wildfires had destroyed Gediman’s girlfriend’s home just days earlier. Her parents had escaped in time, but the 10-year-old family cat could not be found.

“As we entered the neighborhood that I had once known so well, I had no idea where we were,” Gediman says. “Everything was full of destruction. Of smoke. Of ash. Of complete and utter rubble. I couldn’t make out any piece of familiarity. That was until my girlfriend’s father had pulled over to what was once their home. In a state of complete disbelief I simply just looked around with wide eyes letting it all sink in.” 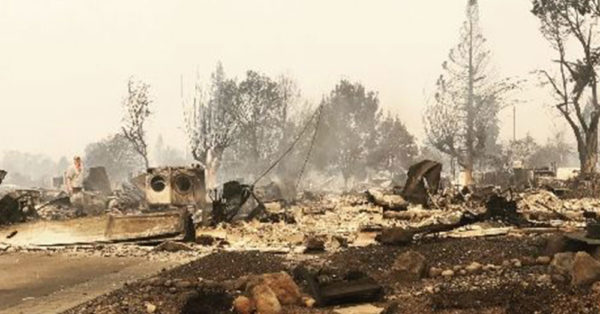 Source: GoFundMe
Steph Gediman’s girlfriend’s home was destroyed in the fire that burned most of Santa Rosa.

A Cry For Help

The Coffee Park neighborhood had been reduced to cinder, but even in the silent, charred landscape of Santa Rosa, Gediman could hear something else.

“As I stood there blank in the face, I hear a meow. A quiet meow,” she says. “A meow that was not of comfort but of a cry for help.”

Gediman turned to find an orange cat emerging from one of the destroyed homes.

“This cat had, I guess you could say, hardened ash all over its body,” Gediman says. “Its face had this hardened black ash to the point where it felt like an awful scab that had yet to fully heal. This cat’s hair was fully singed, and his ears were burnt to the point where they looked like they had been boiled. His eyes were so damaged from the heat and smoke they were swollen, oozing and half closed.

“I didn’t know what to do at that moment.” 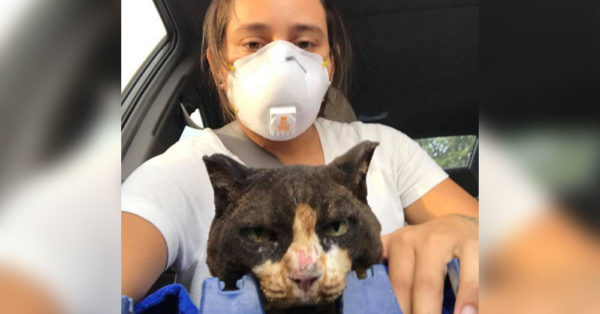 Source: Steph Gediman
Gediman returned this cat to its owner with the help of social media.

Gediman knew she had to help the animal, but she wasn’t sure how severe its injuries were or how to properly handle a badly burned cat without making things worse.

The cat walked up to Gediman for help, but she was still assessing the situation. Perhaps understanding its own pressing need for help, it then began to walk away.

“I had gotten the feeling he thought I wasn’t going to help him and that completely broke me,” Gediman says. “So without any more hesitation I picked him up. Immediately debris from his own body went onto mine. I was completely covered in the catastrophe his body went through the previous night.” 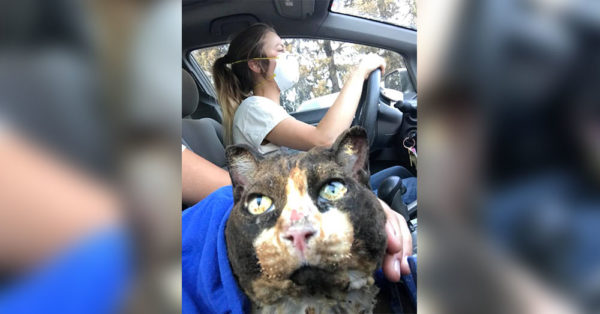 Source: Steph Gediman
Gediman and her girlfriend rescued two different cats and managed to reunite with their own cat after wildfires ripped through California.

Gediman and her girlfriend took the cat to the Animal Care Center in Rohnert Park. The animal was visibly frightened and suffering from trauma but wouldn’t leave Gediman’s lap.

“Despite every unimaginable experience this cat went through, he sat on my lap in the car ride and didn’t move the whole time,” she says. “He had his chin up against my arm and I could tell being snuggled into my body was making him most comfortable. So snuggled him I did. Held him tight I did. Pet him to the best of my ability in any areas I could I did. To the point where I started to hear some purrs from him.

“He was my new friend and I knew he knew the car and my girlfriend’s family and I were there to help him.”

Gediman says she has always been an animal lover, but her experience at the Pet Care Veterinarian Hospital immensely amplified that. It’s clear at least one cat could have fared much worse without her care and compassion.

The Coffee Park neighborhood cat was transferred from ACC to UC Davis after being cleaned up and bandaged.

“His paws were burnt but not all paws needed to be bandaged,” she says. 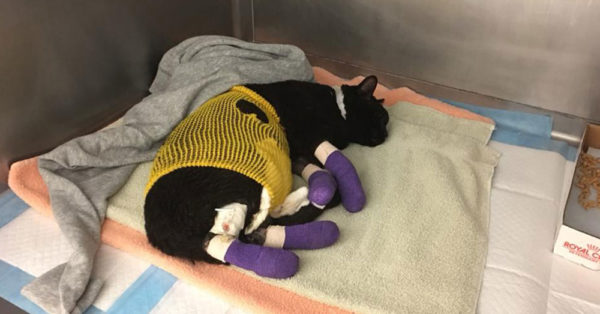 Source: Steph Gediman
One of the cats that Gediman rescued.

The following day, Gediman and her girlfriend returned to Coffee Park, looking for other ways they could help and hoping to find the cat’s owners. They found a family recording the burned remains of their own house with a phone.

“Out of instinct, my girlfriend asked the family if they had lost a cat. The woman had replied, ‘Yes,'” Gediman says. “We asked if her cat was orange and she replied, ‘Yes.’ We then pulled our phones out and showed her a picture of the cat and asked if that was him.”

“She fell to her knees immediately, crying the hardest I had heard a human cry in some time,” Gediman says. “I actually don’t know if I have ever witnessed someone drop to their knees out of such relief in my life. And in the middle of this complete war-zone-looking road that was once a beautiful neighborhood, my girlfriend and I had knelt down with this stranger and held her tight.”

Gediman and her girlfriend reassured the woman that the cat was in caring hands and on the mend.

“I could feel while hugging that woman the level of relief she was releasing with her energy,” Gediman says. “The whole moment was not only beautiful but surreal. It was the first time I had felt so human in years or maybe ever. And even more so, it was one of the first times I had witnessed a miracle.”

A picture of the cat on Facebook was shared over 14,000 times, but still didn’t reach the inconsolable owner. Had Gediman not returned to her girlfriend’s former home, who knows if the cat and its human would have ever been reunited.

The orange cat is recovering with its owner. Since the rescue, Gediman and her girlfriend found and rescued another cat in a sewer gutter near a railroad track. Sadly, although Gediman’s girlfriend was eventually able to locate her own cat with the help of social media, the cat passed away from his ordeal shortly after their brief reunion.

“…But it was through his search that we came across these other lives that needed immediate saving,” Gediman says. “And I’m so thankful the universe led us to those lives.”

Still, there are yet many more that are missing or in danger. Gediman encourages those who can to donate money and supplies to facilities currently providing free medical care for animals injured in the wildfires.

California officials have ordered an entire city to evacuate due to worsening conditions that have killed 40 people in the largest fire in state history. We need your help! Click the button below to make a difference!

Fires have been burning in California’s Sonoma, Napa, and Mendocino counties for over a week, as firefighters work tirelessly to contain the blaze. 17 wildfires have consumed well over 220,000 acres, left over 20,000 people under mandatory evacuation, claimed the lives of at least 40 people, and consumed at least 3,000 homes and businesses in a matter of days.
With firefighters still struggling to contain the fires, people, pets, farm animals and wildlife all remain at risk. GreaterGood.org is providing support to partners who are providing response, shelter and relief to those affected.
The recovery for many will be a long road, and the time to support them is now. Cash donations are needed to continue operating shelter and rescue operations. Please Help!
Make a difference