Bored Sports Broadcaster Commentates On His Dogs Eating Their Food

Because of COVID-19, most everything has been canceled this spring, including sports. That means, there are a lot of bored sports commentators out there trying to entertain themselves. And that is exactly what happened with Scottish BBC broadcaster Andrew Cotter, who ended up making the funniest video to come out of this pandemic.

Cotter, who normally covers golf and rugby events, found himself quite bored and came up with a new hobby to keep himself entertained.

Posting to Twitter, he captioned the video as “I was bored.” The video starred his two Labradors, Olive and Mable, as they raced to finish their food. Cotter provided commentary for the whole video. 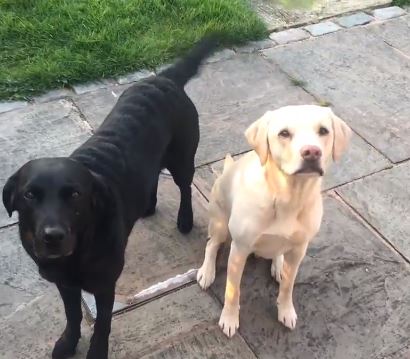 In the video, both Olive and Mable race to finish the food in their bowls – tails wagging the entire time. Cotter stood over them the whole time, waiting to see which finished first.

Both dogs impressed with a record 60 seconds, but it was Olive who took the crown from the reigning champ, Mable. 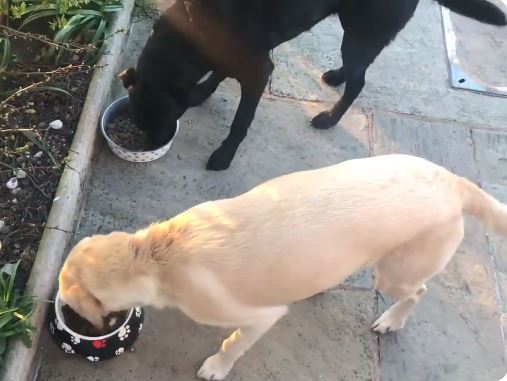 The hilarious video was shared to Twitter, where it received more than 58,600 retweets and made well over 200,000 likes. In addition, the views of the video were well beyond 5.9 million.

Andrew, at the end of the clip, told his 69,000 followers to “join us again tomorrow for some more live coverage of a snooze on the sofa.”

Below, is the video of the most adorable race:

The video was so cute, it was impossible not to comment. Even big stars like Deadpool actor Ryan Reynolds commented on the video clip. Reynolds cited a video quote when Andrew states that Mable was “tasting absolutely nothing,” followed up by several of the laughing face emojis.

Even his fellow broadcaster, Dan Walker, joked that the video was the “highlight” of Cotter’s career, commenting, “Cotter… I love that this is going to be the highlight of your career. We need a sequel.”

Cotter… I love that this is going to be the highlight of your career. We need a sequel
😂😂😂

We agree with him on the sequel part.

Even former footballer Gary Lineker uploaded the video, stating that Cotter is “one of the very best commentators we have” and added that the video was “great stuff.”

Great stuff from one of the very best commentators we have. https://t.co/by1SkjkgGq

Cotter shared a follow up photo of the two pups, writing that “this has changed them.”

This has changed them. pic.twitter.com/pJ3m7sAKb7

Can’t wait to see that sequel video that he promised us.