Sombra Has Uncovered Over 10 Tons Of Cocaine In Her Career, And The Mafia Wants Her Dead

Sombra is a skilled drug sniffing dog with at least 245 arrests to her name. She’s one of the Colombian Anti-Narcotics Police’s best weapons against the regional mafia.

And the mafia wants Sombra dead.

A $70,000 bounty has been placed on Sombra’s head by the Urabeños mafia. The 6-year-old German Shepherd–“the torment of Otoniel,” according to a tweet from her anti-narcotics police colleagues–is now being held at Bogota’s El Dorado airport, where she will hopefully be safe from harm.

According to CNN, Sombra has helped the police uncover more than 10 tons of cocaine over the past 3 years. She’s subsequently been awarded two K-9 Medals of Courage, and is up for a third in 2018.

During those missions, Sombra has won great respect from her handler, Jose Rojas, and others in the anti-narcotics division. She’s become a big hit with children at the airport, too.

“Sombra is a very friendly, calm canine, and for that reason, she has no problem approaching children or people who want to say hello to her,” Oscar Favian Solarte, head of the anti-narcotics division, told El Tiempo. “She’s playful, and in fact that is part of the development of her job. Not only to look for caches of illicit drugs but also, after her work is done, to de-stress, so to speak.”

Sombra has been thwarting Colombia’s Urabeños, or “Gulf Clan,” since 2016, when she found over 2,500 pounds of cocaine in a shipment of banana boxes on their way to Belgium, SFGate reports. The following year, she uncovered 1.1 tons, and in 2017, Sombra detected a combined 9.3 tons of cocaine in various busts.

Reports on the exact amount of the bounty have varied, but many stories indicate a reward of 200 million Colombian pesos, or just under $70,000, has been offered by the Urabeños for killing Sombra. 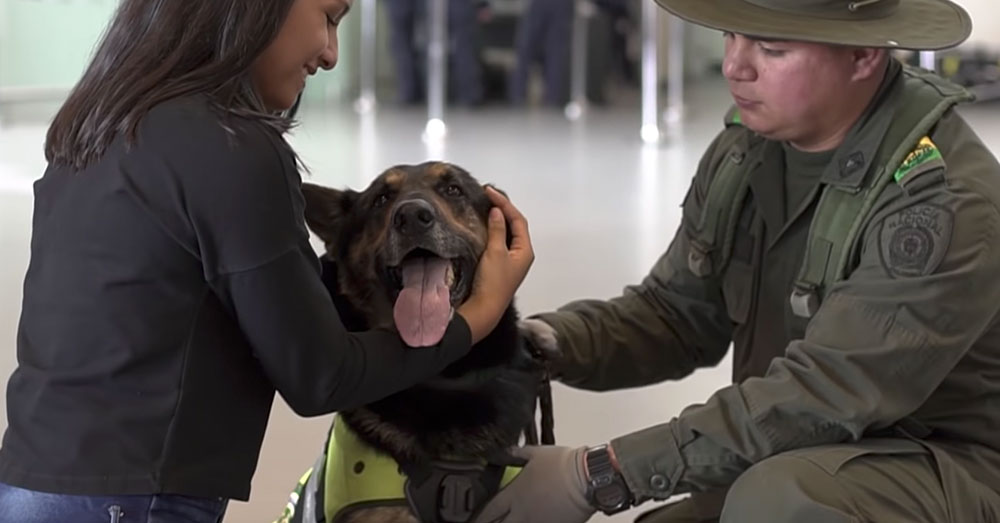 “The fact they want to hurt Sombra and offer such a high reward for her capture or death shows the impact she’s had on their profits,” a police spokesperson told The Telegraph.

See Sombra in action below!