Shorty has spent most of his life following his human around. For years, wherever Marc Peralta was seen, there was Shorty the Pug.

Shorty was adopted when he was just a few years old. Now 15 years, Shorty doesn’t have the same spring in his step as he used to. But that doesn’t mean he can stand to be without Marc.

“Shorty and Marc have a very special relationship,” Kristen Peralta, Marc’s wife, told The Dodo. “Marc calls Shorty his ‘angel dog.’ Shorty is just so happy when Marc is holding him.” 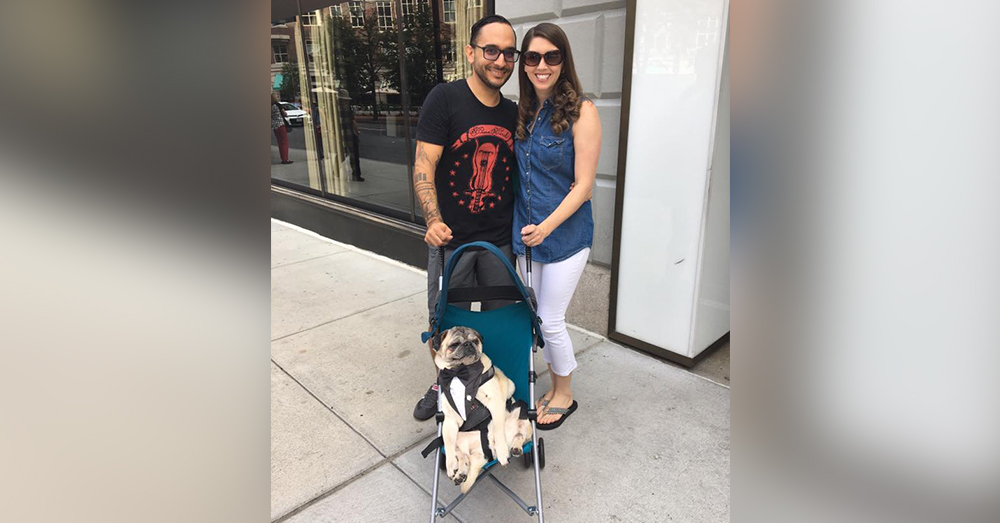 With Peralta having to travel for work more often, however, Shorty has been missing his human.
A lot.

“He’s been having a lot of separation anxiety in his senior years and, unfortunately, Marc has to travel a good amount for work,” Kristen said. “Shorty will bark and cry when Marc is gone and nothing seems to calm him.

“He won’t even settle when I am holding him now,” she continued. “He just wants his dad.” 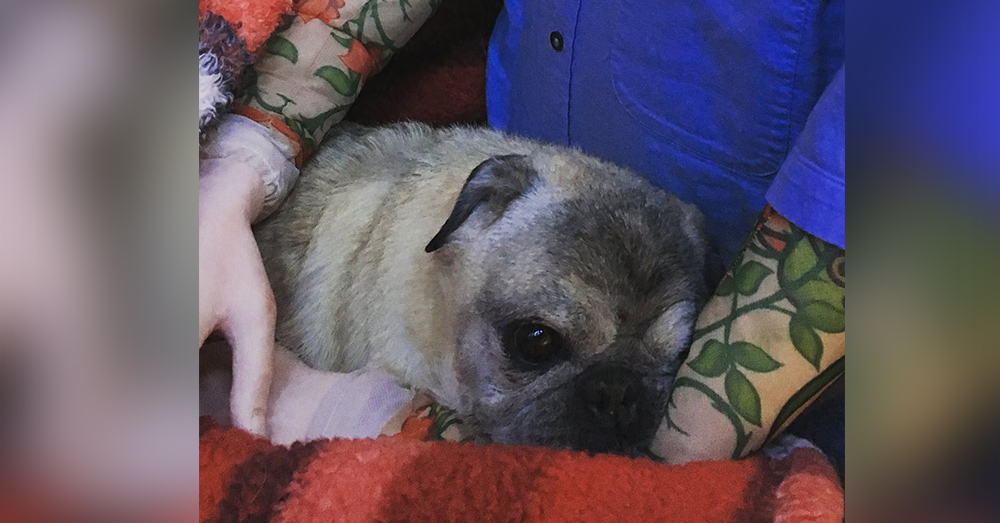 Source: Facebook/Kristen Peralta
Shorty misses his human, Marc, when he is away for work.

Marc loves his senior Shorty whether he’s home or away. The Peralta’s have a soft spot for old dogs, in fact. They operate Vintage Pet Rescue in Rhode Island, where elderly canines spend their twilight years in the comfort of friends.

But only one friend will do for Shorty. 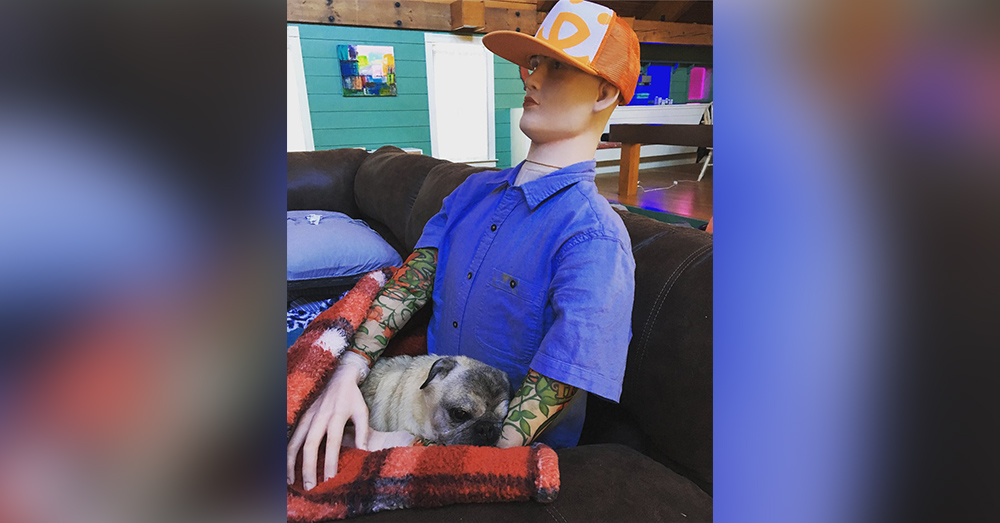 Marc’s extended absences started to send the particular Pug into fits of anxiety. The Peraltas tried using one of Marc’s old T-shirts as a pillowcase, but that only served to offend Shorty. He wasn’t about to be placated by pillows. He needed the real thing.

So, the Peraltas obliged.

They ordered a dummy, about the same size as Marc, dressed it up in his clothes, and let Shorty determine whether it would suffice. 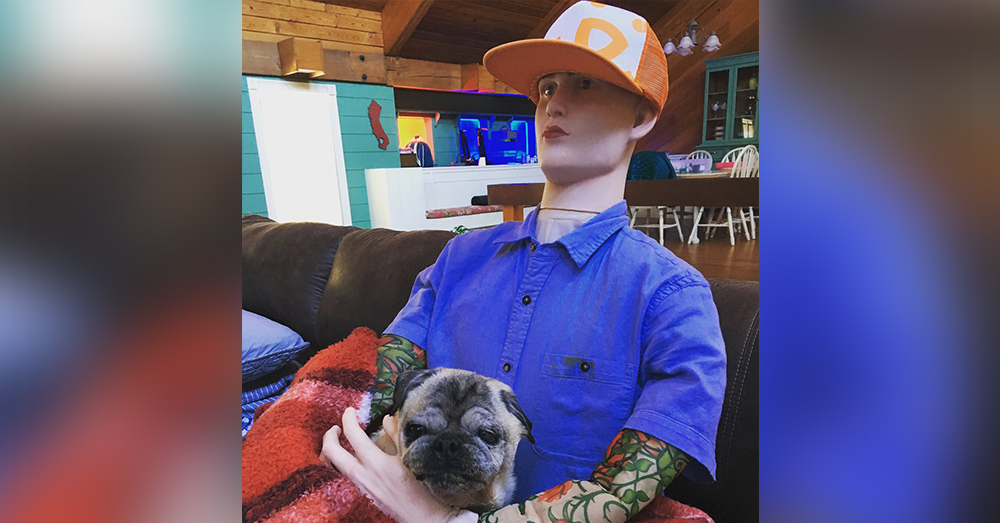 Source: Facebook/Kristen Peralta
Shorty even shares the Dummy with other senior dogs at Vintage Pet Rescue.

“I put one of Marc’s already-worn shirts on it so it would have his smell,” Kristen said. “I sat Shorty down on the lap, wrapped the arms around him, and he was asleep within half an hour.

“He slept through the night wrapped in the dummy,” she continued. “It was truly remarkable.” 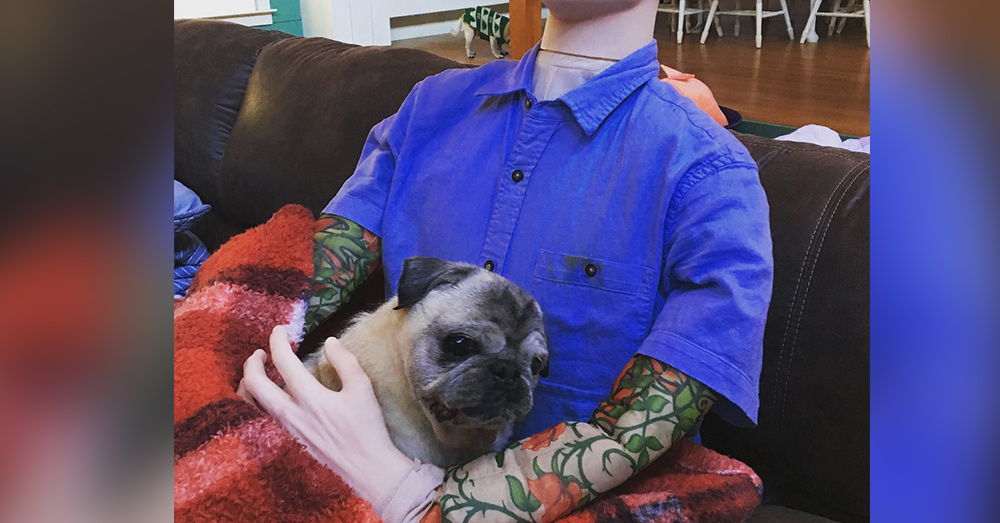 Source: Facebook/Kristen Peralta
Shorty’s anxiety is tamed with the help of his soft dummy.

Some of Shorty’s furry friends are sneaking a little dummy time on the side, too. His little brother, Bug, still isn’t sure if it’s a dummy or not.

“He thinks it’s a real person, so he was all over it,” Kristen said. “Licking the face and pulling on the hands. It was hilarious.”

Marc Peralta lost a little wind in his sails when he realized just how easily he could be replaced, but it’s worth remaining humble if it helps his canine friends.

And that, the dummy does.

“It’s actually been completely adorable,” Kristen said. “The other pups will lay next to the dummy or on its feet. Last night, five of them were huddled around the dummy.”