Kooky And Spooky: Check Out The Winners Of The Shelter Challenge Costume Contest

While dressing up isn’t in every pet’s purrview, those who have entered the Spooky Kooky Halloween Costume Challenge from Shelter Challenge sure look cute!

Here are the 10 finalists, leading off with the 3 winners who have each won an Animal Rescue Site store shopping spree for the shelters they represent.

The winning shelters receive $5,000 in pet supplies crucial for their mission, containing bowls, treats, crates, flea treatments & more! Three of the people who voted in our contest have also won $100 shopping sprees to The Animal Rescue Site Store.

Check out these cute costumed pets! 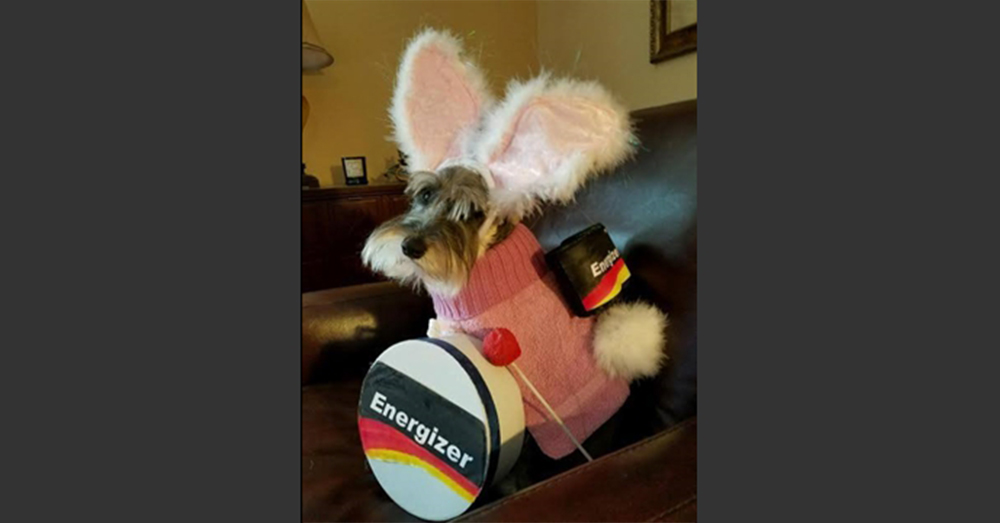 Cochise (Cochi) was adopted from a family that had to move to a new home where pets were not allowed. They were devastated but still wanted the best for their pet.

“We have been blessed that they chose us as his family,” Cochise’s mother Rebecca says. “Cochi is the most amazing, loving boy. His favorite things are belly rubs and he has a special talent of unrolling the toilet paper in less than 10 seconds.

“We have five rescue schnauzers and they all look to him as their leader, he is such a sweet brother to them and the most loving little boy.” 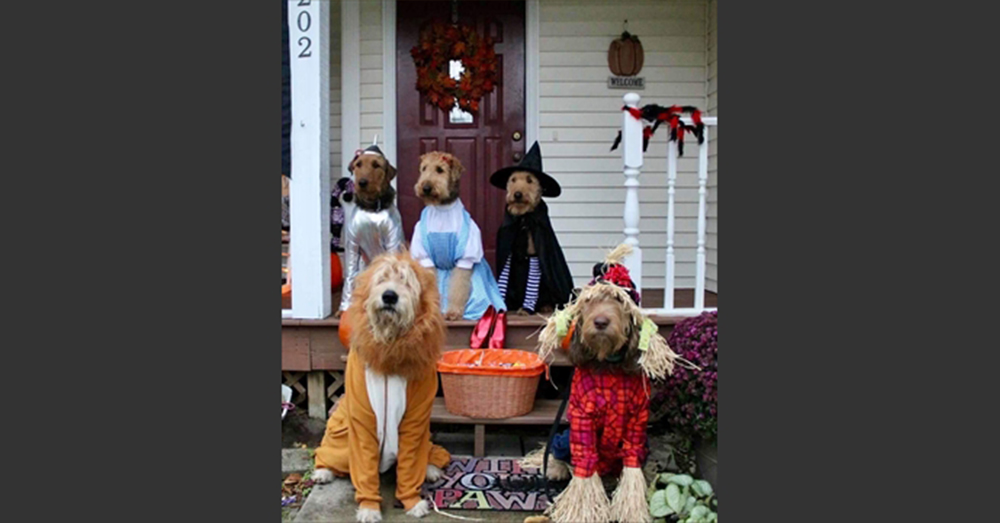 This quintet loves to play dress up and watch the Wizard of Oz.

In their winning entry, the impeccably dressed pets are trying to help Dorothy find her way home.

Thanks to pet parent Linda for submitting their cute photo, National Airedale Rescue, Inc. will also be receiving a prize pack of pet supplies worth $5,000. 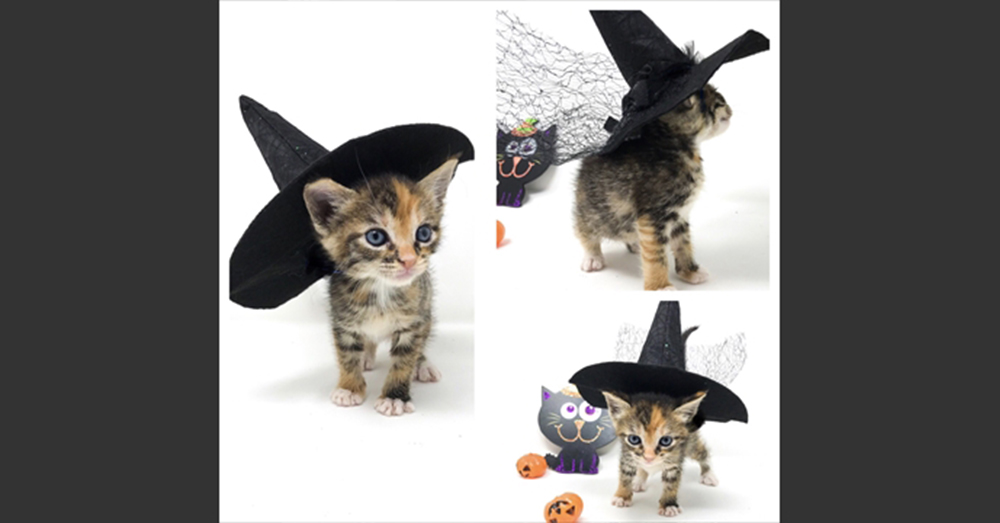 Sushi is the tiniest witch in our contest, and undoubtedly the cutest.

Sushi, you’ve certainly put a spell on us.

Sushi entered the contest representing Animal Aid for Vermilion Area, which will receive the third prize pack of $5,000 in pet supplies. 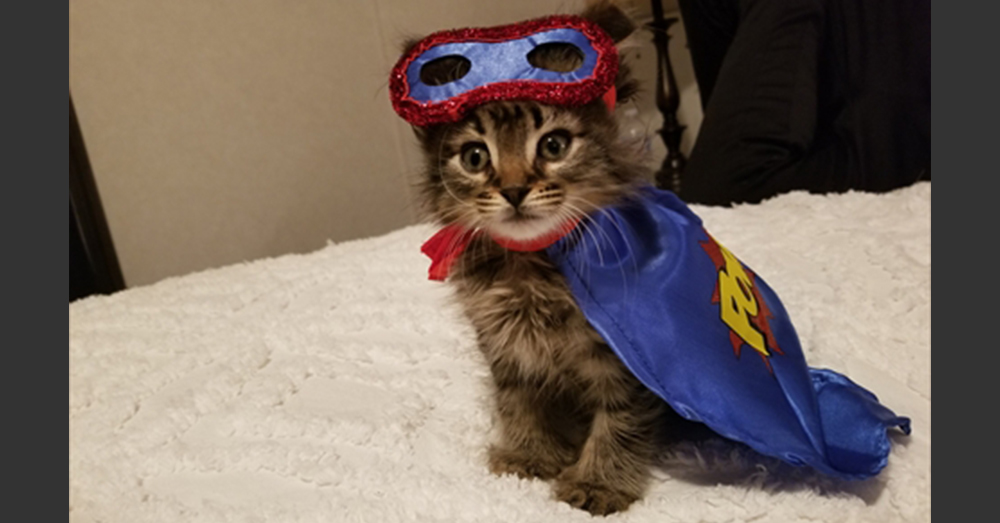 Ozzy was part of a feral litter that was dropped off at owner Stephanie’s house one day.
While Stephanie was able to find homes for all Ozzy’s brothers and sisters, this little kitty needed some extra TLC.

“After fighting off an infection and putting on some weight he is a super hero in his own right,” Stephanie says. 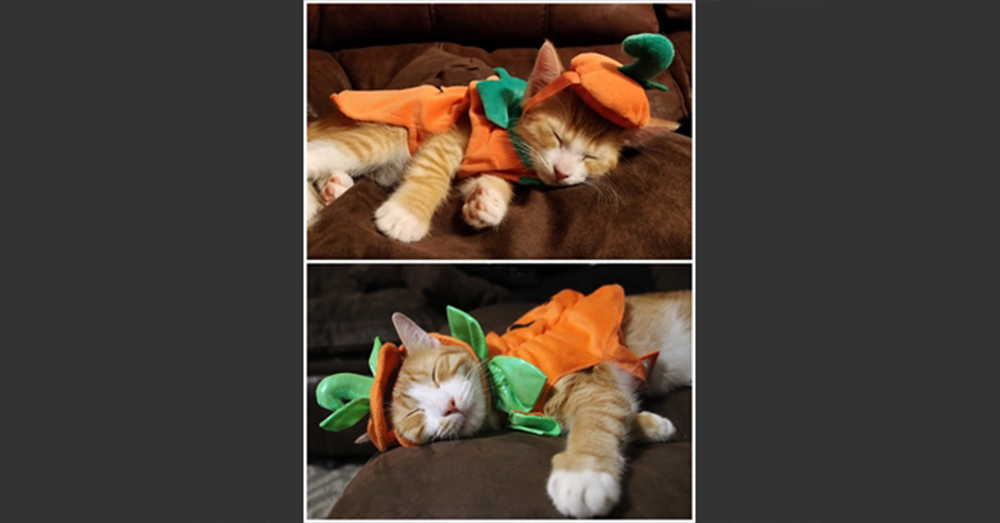 What can be said about Pumpkin that can’t be illustrated in bright orange? This fiery-furred cat has been dressing up as his namesake since he was little, as evidenced in the picture submitted by mother Tina. 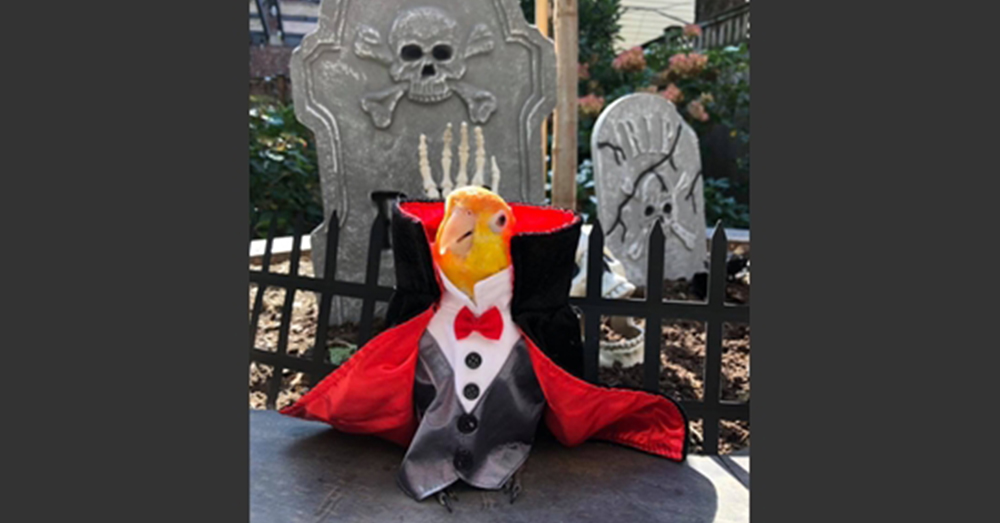 Sweetie was adopted 3 years ago. According to her mother, Joy, Sweetie is “by far the most lovable funny clown.”

Sweetie loves everyone, she loves rides in the car, playing peekaboo, and talking to people whenever she gets the chance. 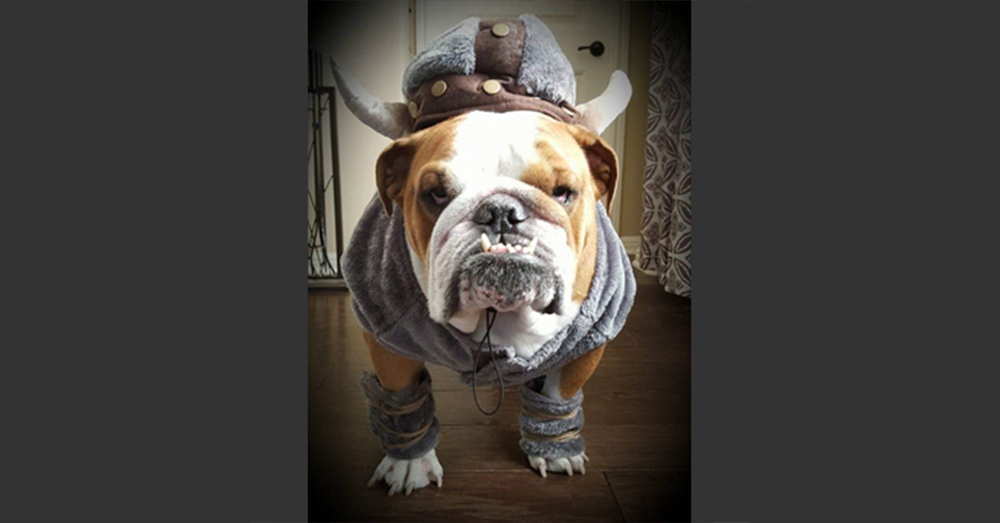 Archie loves to dress up and scare the neighborhood kids with his spooktacular underbite!

“He accepts bacon and cheese in exchange for the tricks he performs,” mother Clarissa says. 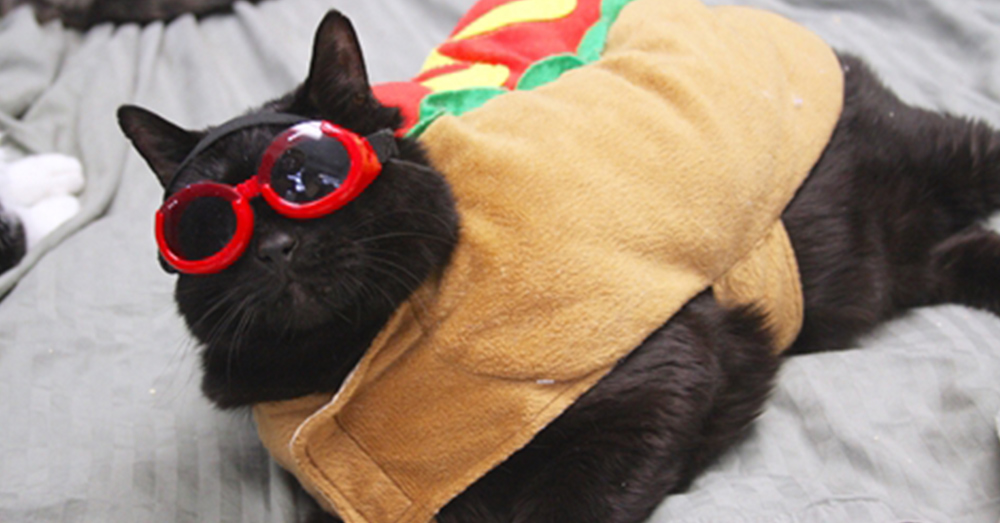 Isis’ mother Jackie works at an animal shelter. that’s where she fell in love with Isis.

“It’s a shame that he was surrendered at 11 years old, but he doesn’t let anything get him down,” Jackie says. “He has such a sweet and loving personality.”

Shelter staff dressed some of the adoptable cats for Halloween but Isis was the only one who enjoyed himself.

“He LOVED strutting around in his hot dog costume,” Jackie says. “He didn’t want to take it off!”

Jackie is hoping that Isis’ photo in our contest will bring someone to the Lehigh County Humane Society who wants to adopt him. 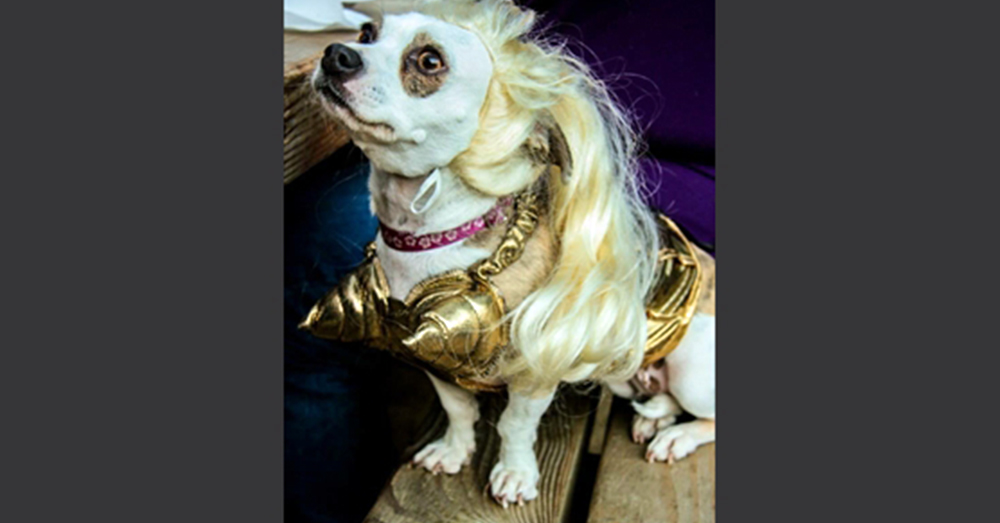 Mona Lisa is the joy of her human’s life.

“We’ve been together for 7 years now, and yet her sweetness and beauty grow more and more everyday,” mother Jessica says. “I adopted her at a shelter I used to work at during college. I saw and worked with hundreds of dogs that came through, but she really stuck out to me for some reason. For this reason, I believe we were meant to be together.”

Mona Lisa is “a fabulous lady of mix breed origin.” Sadly, she was abandoned shortly after giving birth, a mother left to fend for her puppies.

“Now that she’s in her forever home, Mona Lisa no longer needs to worry about where her next meal comes from,” Jessica says. “She has a human that loves her, feeds, walks and travels with her. She even gets to dress up during the cold months!

“Mona and I’s favorite outfit is her Madonna costume,” she adds. “Because well, Mona-donna is really quite fabulous!” 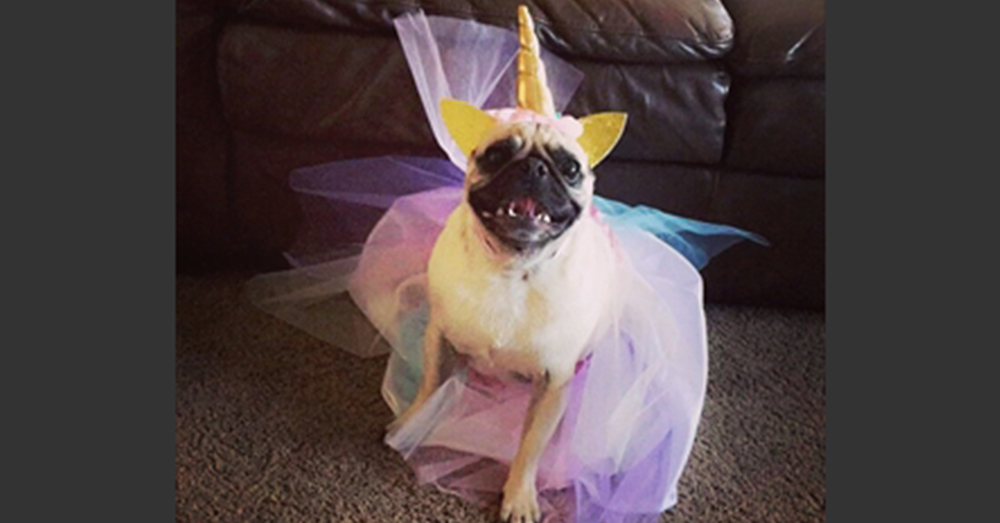 How Pet Parents Can Enjoy Halloween And Avoid A Frightful Night: Click “Next” below!