Within the confines of Shanghai’s 2019 World Dog Show, people and pets were celebrating the lives of dogs, but life was not so spectacular for many others in the city. Just blocks away from the event, dogs were being served up as dinner, some of them stolen pets who had been slaughtered for meat.

“One of the restaurants displayed several dog meat dishes on its menu and also advertised dog meat in its window, with a sign boasting that its dog meat is supplied by slaughterhouses in Xuzhou city, notorious for the country’s biggest dog meat processing industry in Peixian county, Jiangsu Province (north of Shanghai),” HSI reports. “When the activists traveled to Peixian and visited one slaughterhouse, they discovered 22 dogs cowering in the corner of the facility having just witnessed their cage mates being beaten to death.”

Working with Humane Society International, one group of activists has rescued those 22 dogs from a Shanghai slaughterhouse. Those animals are now at an HSI-supported shelter waiting to be adopted out. 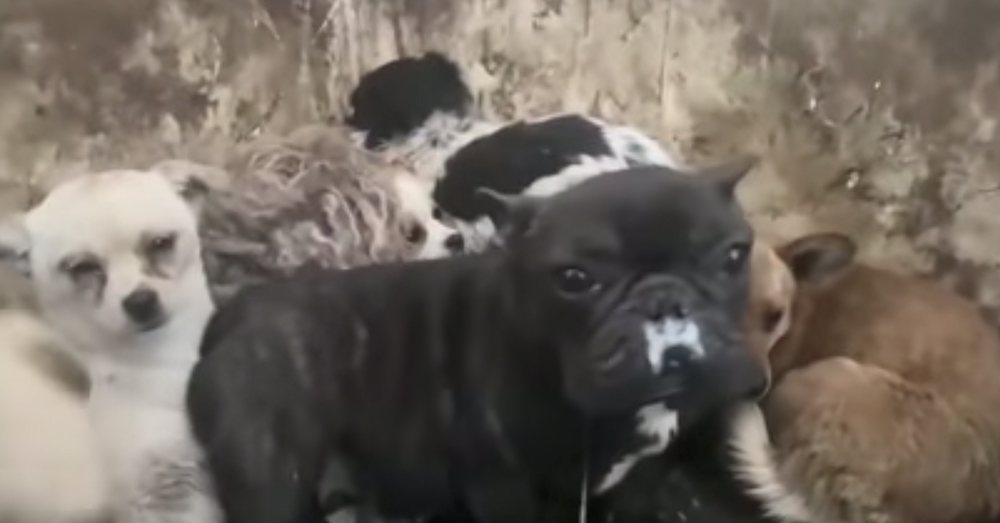 Source: YouTube/The Humane Society of the United States
Twenty-two dogs were rescued from a slaughterhouse near Shanghai.

“This investigation exposes the horrifying way that millions of China’s dogs are abused for the meat trade while others are pampered for the pet trade, with those two worlds colliding when pet dogs are stolen from back yards and the street to be brutally killed for human consumption,” says Dr Peter Li, Humane Society International’s China policy expert. “The slaughter operation where the 22 terrified dogs were rescued could easily have supplied the Shanghai restaurant that claimed to get its dog meat from Xuzhou. Most of the rescued dogs are small, lap-dog breeds typical of pets in China, and the activists found a pile of collars in the corner of the slaughterhouse, so there is every likelihood that these dogs were stolen pets. It’s a double standard that enrages many dog lovers throughout China, who are frustrated at how this illegal trade is allowed to continue.” 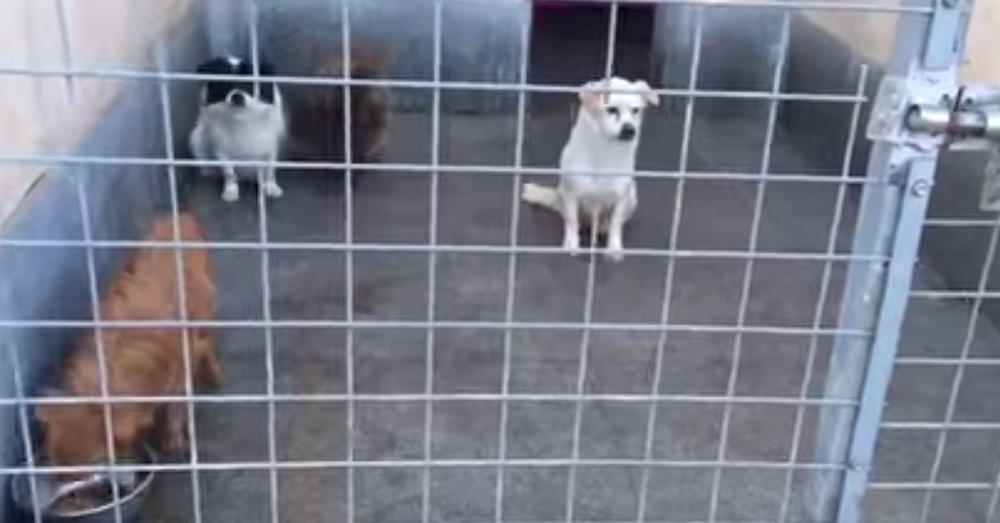 Source: YouTube/The Humane Society of the United States
Many of the animals were likely stolen pets. There was a pile of collars in the corner of their cell.

Li maintains that “most people in China don’t eat dogs.” Every investigation and rescue of dogs headed for slaughter puts pressure on dog meat distributors to close up their operations, as public outrage often follows.

“In fact, the World Dog Show in Shanghai is a prime example of a growing, younger, and more affluent Chinese population who love their canine companions and despise the dog thieves who steal their friends for the meat trade,” Li says. “It also demonstrates the huge economic benefit to China of this booming pet care industry, versus a dog meat trade that acts only as a stain on China’s international reputation. We urge China to act to end its brutal dog meat trade.” 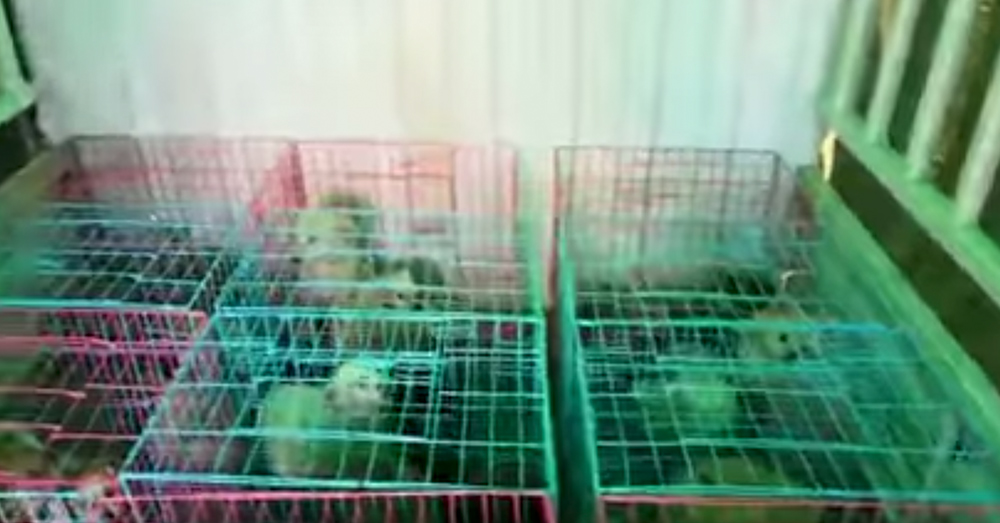 Source: YouTube/The Humane Society of the United States
With the Yulin dog meat festival just a month away, activists are working hard to expose pet slaughterhouses.

A video of the rescued animals shows them cowering in fear after having witnessed others being abused and killed. They have since regained some health and confidence in the care of the shelter.

Although small battles like this are being won more often, the dog meat festival in Yulin, held every year around June 21, will still see thousands of cats and dogs loaded into trucks, en route to slaughterhouses. The festival is not tied to any ancient tradition. It was first held in 2010, less than a decade ago, to help dog meat sellers market their industry. 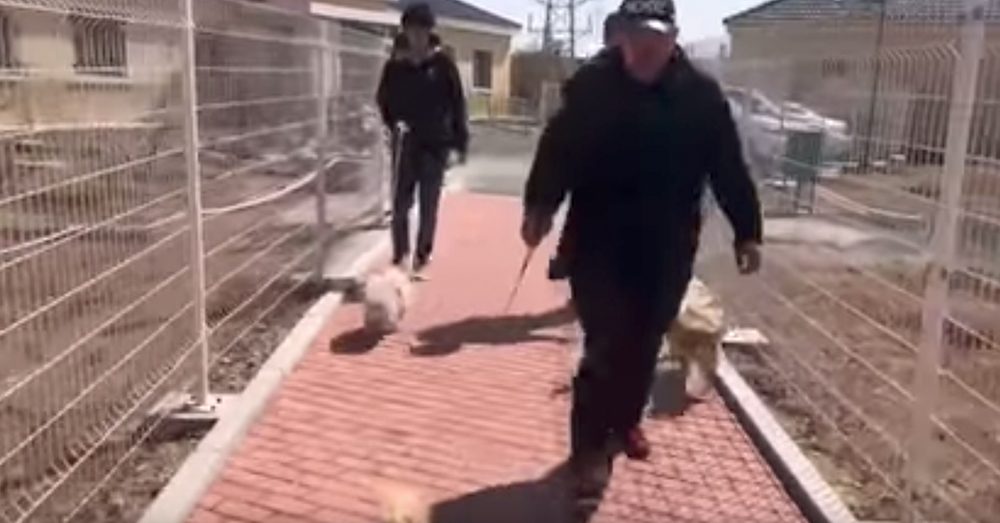 Source: YouTube/The Humane Society of the United States
These dogs are safe now, but many more are still in danger.

Animal activists in China and around the world are determined to see the end of this festival.

“The world is being hoodwinked by Yulin’s dog meat traders,” said one of the activists, Mr. Tian. “Their cruel event has no cultural heritage whatsoever, and has served only to tarnish China’s global reputation. No self-respecting person in China supports that bloodbath, it’s shameful.”