We’ve said it before and we’ll say it again — dogs are amazing animals. When you combine a loving, cuddly, and protective personality, you end up with a beloved pet through thick and thin. The internet’s flooded with story after story about how pups come to the rescue of humans. But what about saving other animals?

Just as most dogs have the instinct to help a person in need, the same goes when they see another animal struggling. Even in a situation that’s harmless and funny, dogs usually spring into action. That’s what happened when a little black puppy found himself in a rather precarious situation. 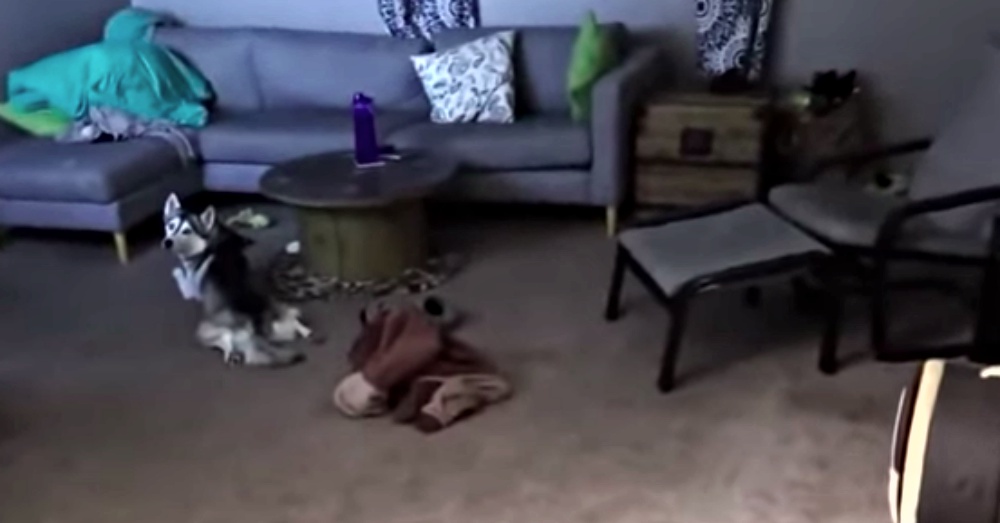 When it comes to the Husky, you can’t help but fall in love with this breed. Not only is this dog gorgeous, but also good-natured with people. Huskies love to play, which is why so many owners refer to them as being “free-spirited” dogs. As families, the Husky is highly protective of every member, both human and canine type. 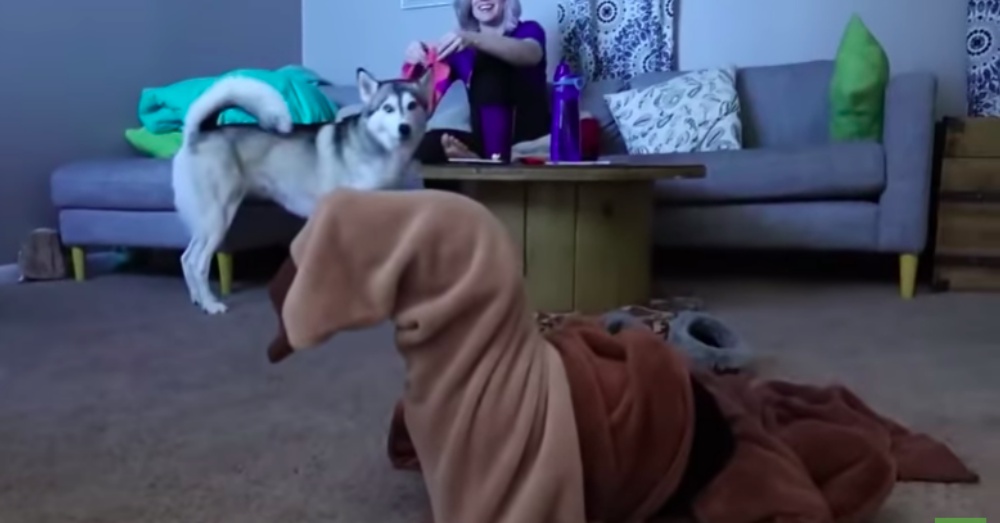 You can’t help but laugh

In a video that’s now gone viral, people around the world got to see a Husky named Nora as she comes to the aid of her little brother, Oscar. The incident was so funny, the owner immediately started to videotape it. We’re glad they did so we can all laugh along with them.

Dressing up the dogs

It’s relatively common to see people put doggie clothes on smaller breeds, especially chihuahuas. But since Huskies have such thick fur, they don’t need any protection to keep them warm. The thing is, this wasn’t a dog onesie but one that belonged to his owner. That made the video even funnier. 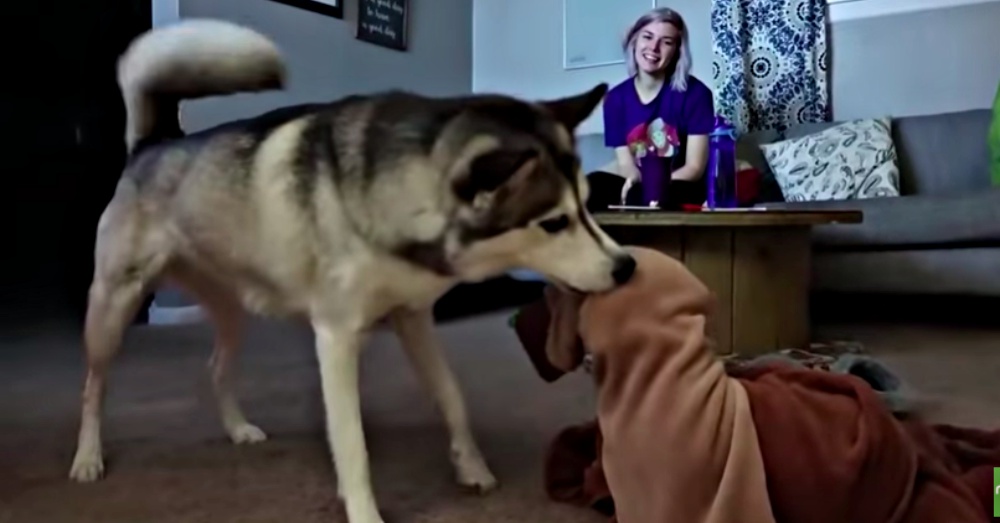 For Oscar, wearing a onesie didn’t go as planned. Somehow, he became completely entangled in it. At the start of the video, you hear one of his owners say, “Oscar, are you in the onesie,” which was followed by a lot of laughter. Then you see what appears as a piece of clothing move…yup, it’s Oscar and he’s stuck.

“What the heck is going on here?”

If Oscar could talk, I’m sure that’s the question he’s asking his owners who just keep laughing. In the meantime, this little puppy’s still flopping around on the floor while encased inside the onesie. The shape of his body makes him look more like a seal than a dog. 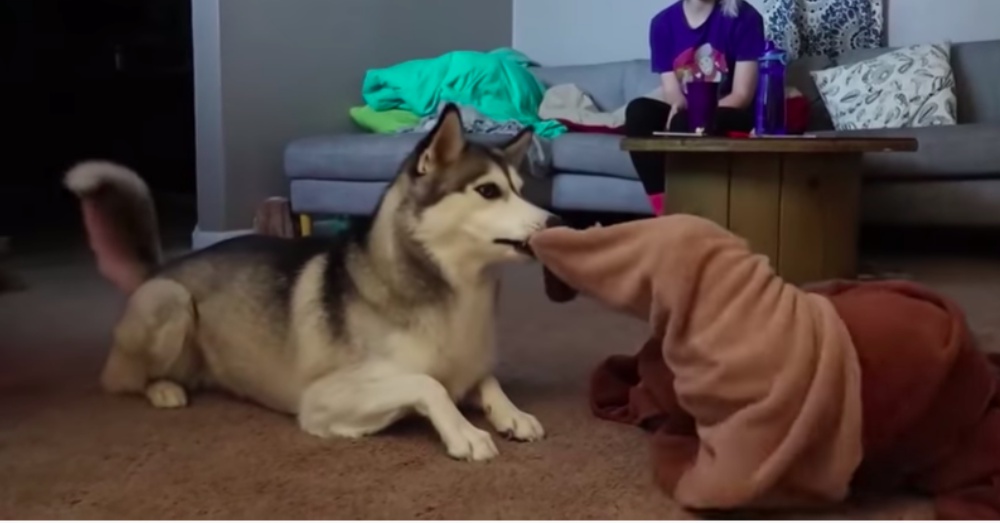 The big sister to the rescue

From the owner’s comment, Oscar’s been inside of this thing for about 10 minutes. After sniffing the pup for a few seconds, Nora tugs a little bit on the onesie. Then, she seems confused as to what she should do next. So, she puts her paws on the ground and her butt in the air while talking to him in Husky language. 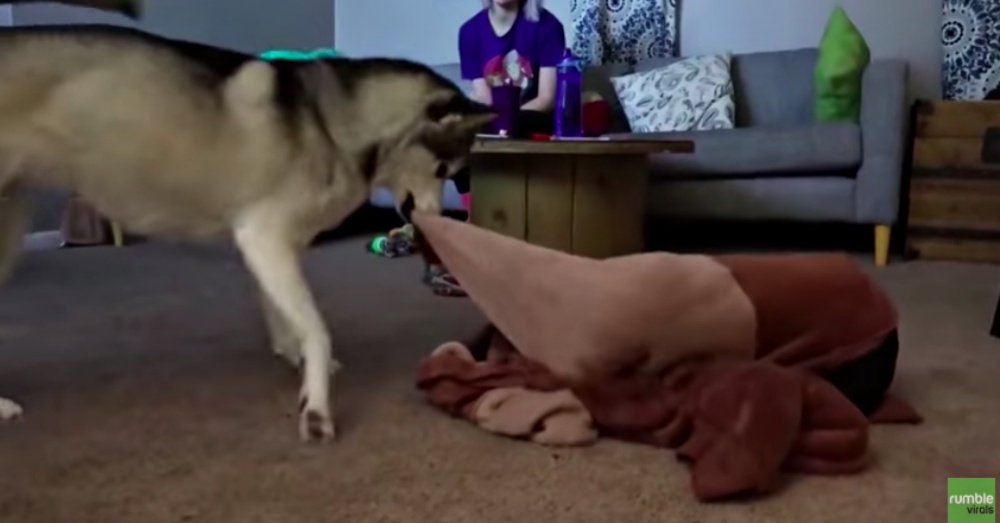 After her coaxing fails, Nora comes up with a different plan

With encouragement from her owners, Nora grabs hold of the onesie and begins to gently pull. She’s determined at this point to get Oscar out of the mess he got himself into. No one’s sure how he got inside of it. All the owners know is they were out of the room for a short period and came back to find the pup all dressed up…so to speak. 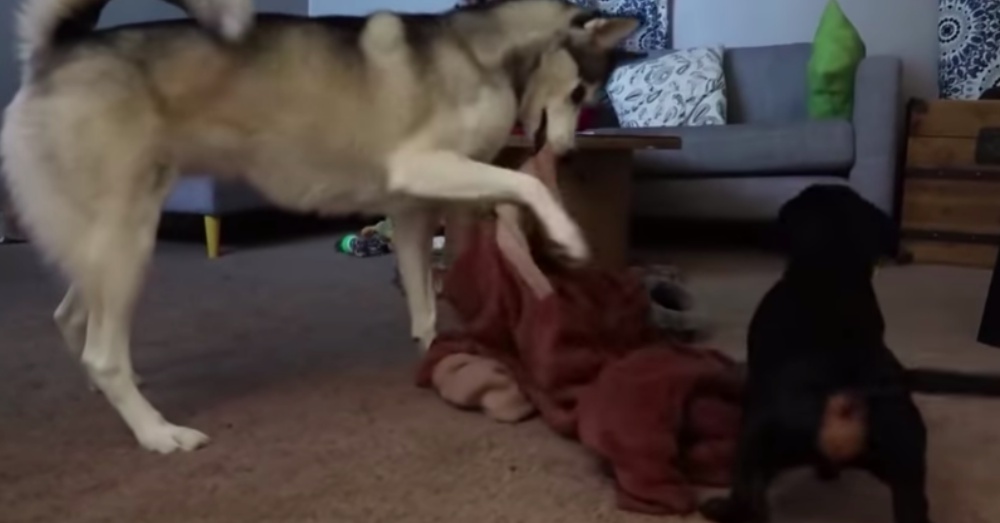 From the look on her face, Nora’s proud of her accomplishment. As for Oscar, he’s just glad to get out of the onesie.

Parched Koala Quenches His Thirst Alongside His BFF, A Dog Named Rusty: Click “Next” below!