It’s up to every pet owner to decide what exactly the “house rules” are for their furry little friends. Is it okay for the pooch to be on the couch, or can your cat sleep on your bed at night?

While these are common decisions to make, it’s not too often that we hear about a person letting their horse come inside the house. That’s right, a horse.

One very lucky horse named Jessie was actually invited into the family living room to hang out for a bit. Not only is it something you don’t see every day, but frankly, it’s pretty funny too. Fortunately, the scene was all captured on camera and posted online for our enjoyment! 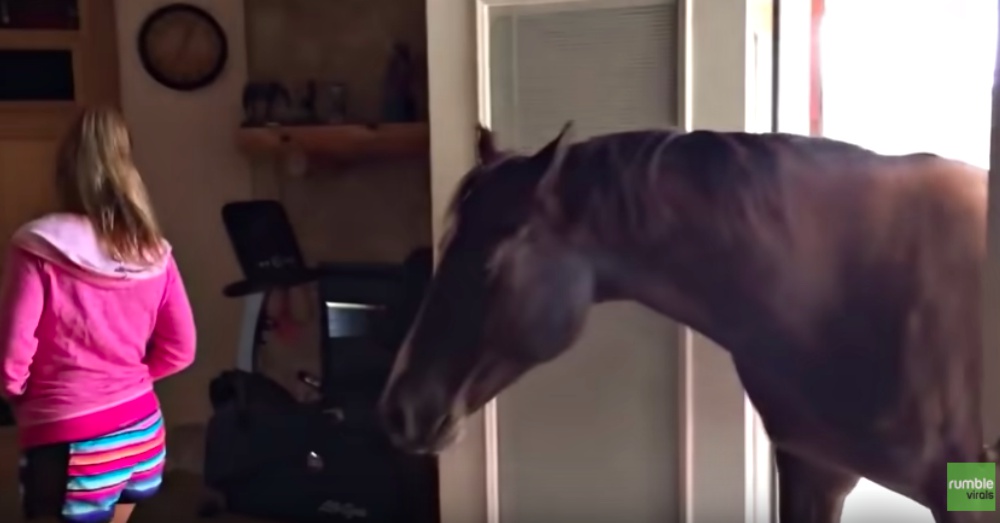 Knock, knock. Guess who it is?
A woman is filming as Jessie the horse is let inside by her owner, Katie. Apparently, he will just walk up to the house door, so naturally, why not let him in?

The creature seems quite comfortable stepping into the living room where there’s soft carpet and the show Friends is playing in the background. Oh, now it makes sense why he likes it so much in there! He even stops for a moment to check out the episode on TV (perhaps he’s a fan). 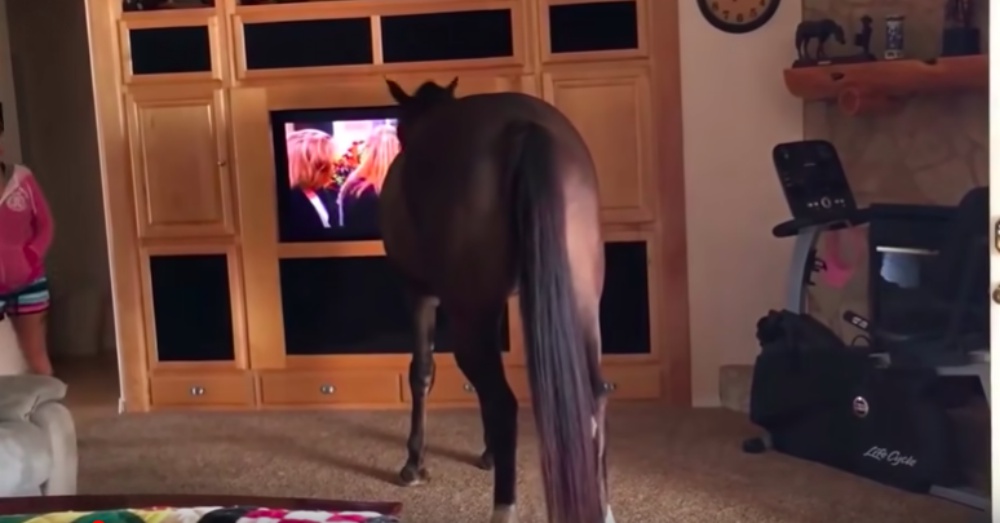 There’s one rule though…

Horses are such beautiful animals that it would be amazing to be the owner of one. But let’s face it, big creatures leave “big messes” – and the last thing anybody would want is for that “mess” to be on the living room floor.

The woman behind the camera tells Jessie, “Don’t go to the bathroom in here now…ok?” That’s right Jessie, all business needs to be done outside! 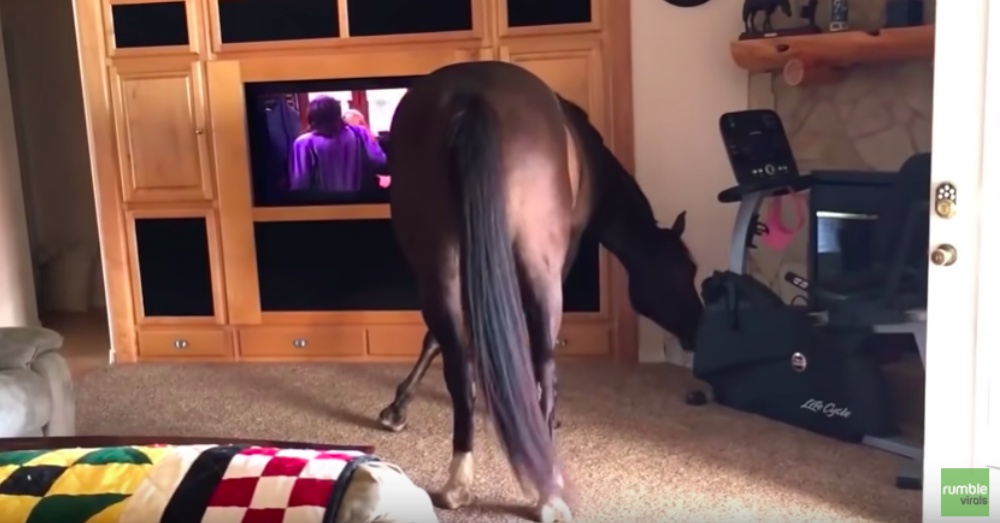 One viewer also expressed this fear on YouTube, commenting: “I’d be so scared the horse would suddenly go to the bathroom!”

Wait, are you really letting this happen?

Jessie seems mighty comfortable in the house and Katie even lets him eat a carrot treat off of the couch. The camerawoman (Katie’s aunt) then shifts over to a dog who’s also in the living room. The pooch is watching the horse from a bit of a distance, but then looks up at the camera. 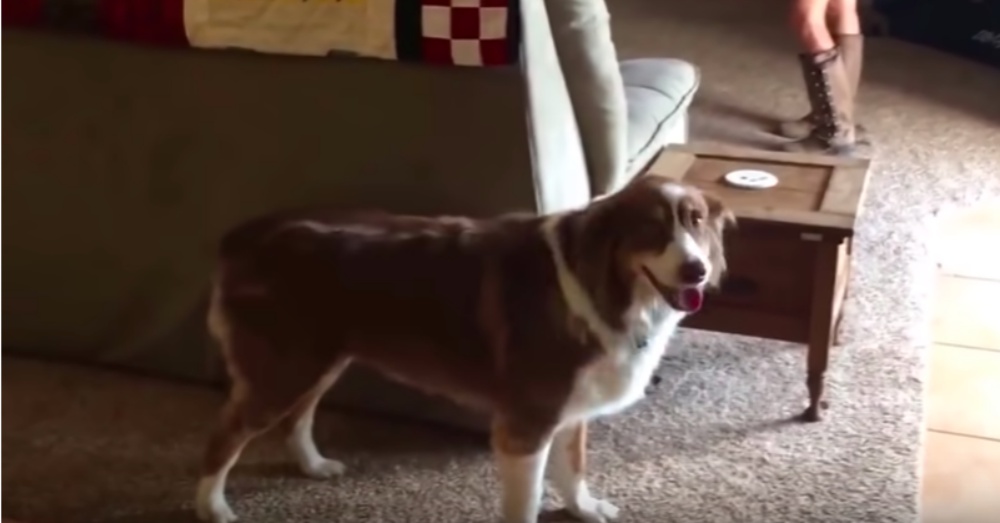 It seems like he’s thinking what a lot of us would be in his position. “Seriously? Am I in the bizarro world? Is Mom really letting that horse inside?”

Katie’s so comfortable having her “favorite horse” indoors that she lays down on the couch. Jessie then walks over and gives her kisses like he’s a giant Labrador. It’s obvious there’s a lot of love between them, which maybe explains why he earned himself an invitation! 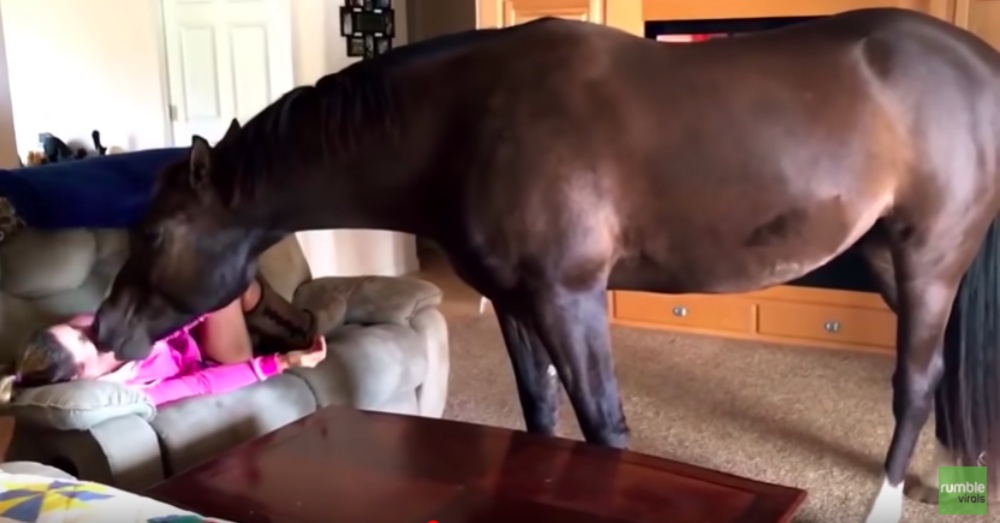 However, then he starts getting too comfortable… 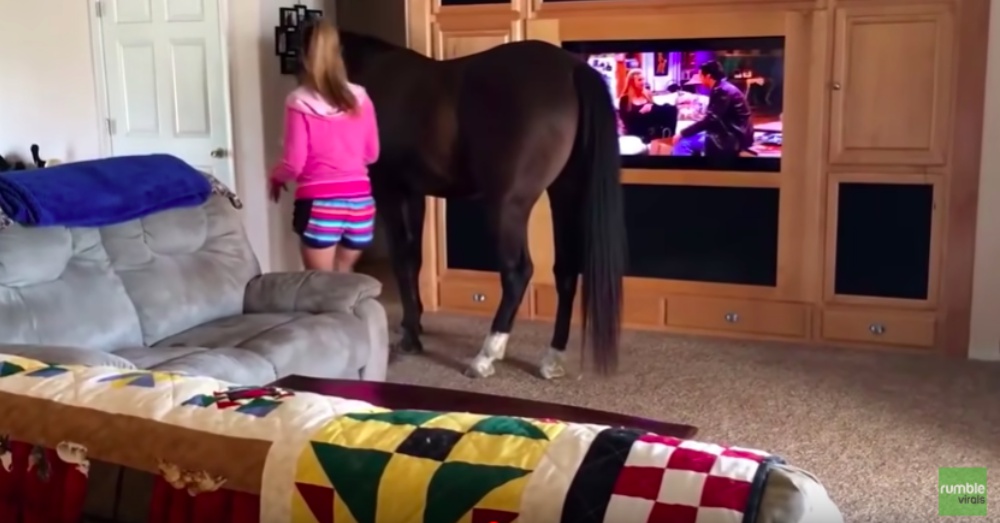 This horse needs a bed.

When Jessie heads for the hallway where the bedrooms are, that’s when they decide he’s worn out his welcome. It’s officially time to get him back outside! Jessie even starts scratching the living room carpet like he’s a dog trying to get his bed comfy.

A viewer commented: “The horse’s scraping of the floor with its hoof was a tell-tale sign that he was happy and relaxed where he was. He plainly didn’t want to leave!” 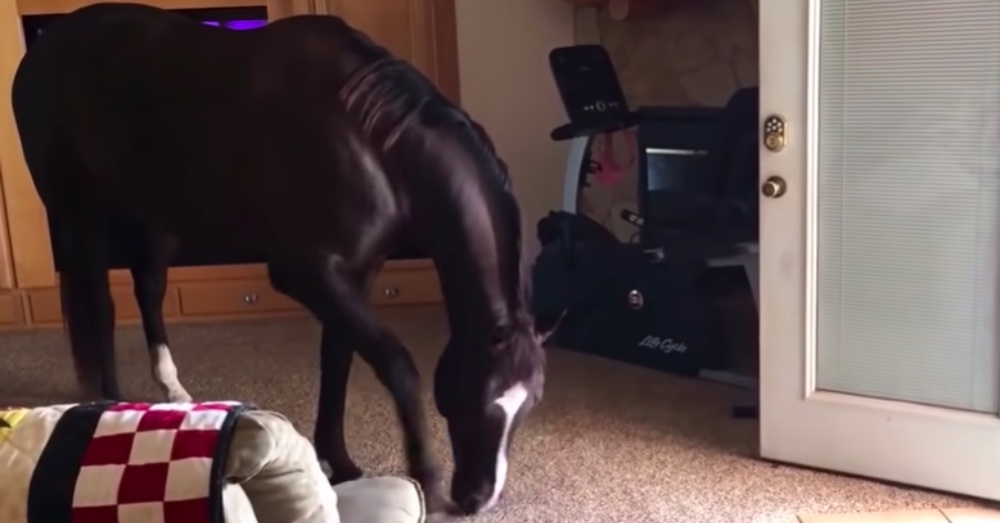 But as we know, all good things must come to an end.

Eventually, Katie’s able to get Jessie outside using a treat. Perhaps because he knows too, there’s always tomorrow (and many more episodes of Friends to catch up on). 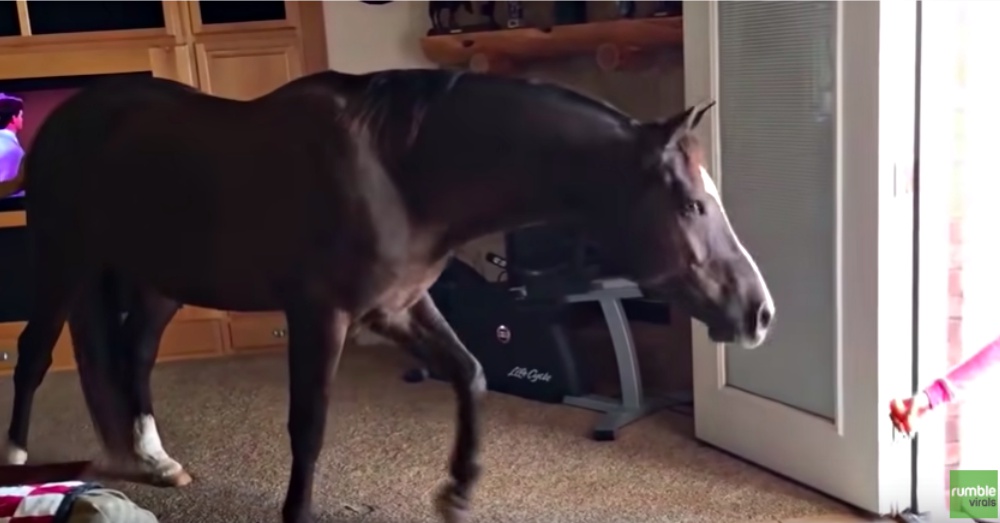 It’s a scene that’s both adorable and comical too! Press play below to see Jessie’s big adventure inside.
Please SHARE this with your friends and family.

Kansas Cowboy’s Dying Wish Was To See His Beloved Horse One Last Time: Click “Next” below!

We believe that there are stories happening every day that are worth sharing. Our mission is to find and distribute these stories to our readers as effectively as possible. Our hope is that every story you read will inspire, inform, or entertain.