When you think of a Silverback Gorilla, the word hilarious might not be the first thing to come to mind. The word “serious” on the other hand, would probably seem more fitting- unless you work in a zoo.

Meet Oumbi! He’s a Silverback Gorilla that you wouldn’t necessarily want to encounter in the wild!

He’s one of the residents at the Twycross Zoo in Norton Juxta Twycross in Leicestershire in the UK.

He’s the father of a clever little Lope- an ape with a serious play obsession.

They’re both Western Lowland Gorillas from Western Africa, which is sadly a critically endangered species.

Lope loves playing around and having fun, much to the dismay of his dad sometimes!

And that’s exactly what was going on in a hilarious video that came out of the Twycross Zoo!

The video begins with Oumbi trying to get some rest under a pavilion in his enclosure, but

Lope wants to play and won’t let his dad rest! 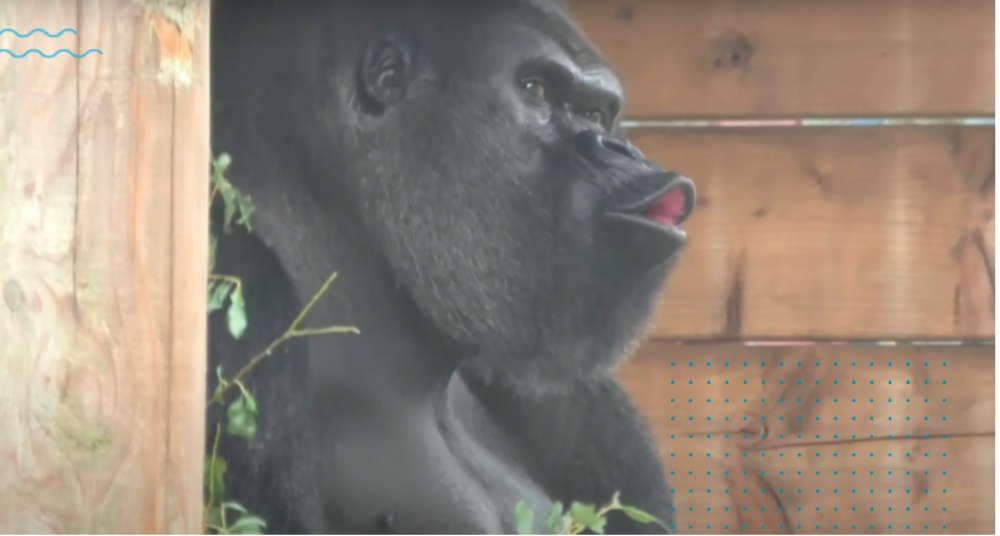 Lope is running around and being generally silly, providing a great show for the zoo-goers that day! He runs around and throws some wood wool on his head.

Oumbi isn’t having any of it!

He continues to sit and rest, hoping dearly that his unruly son will chill out sooner rather than later. 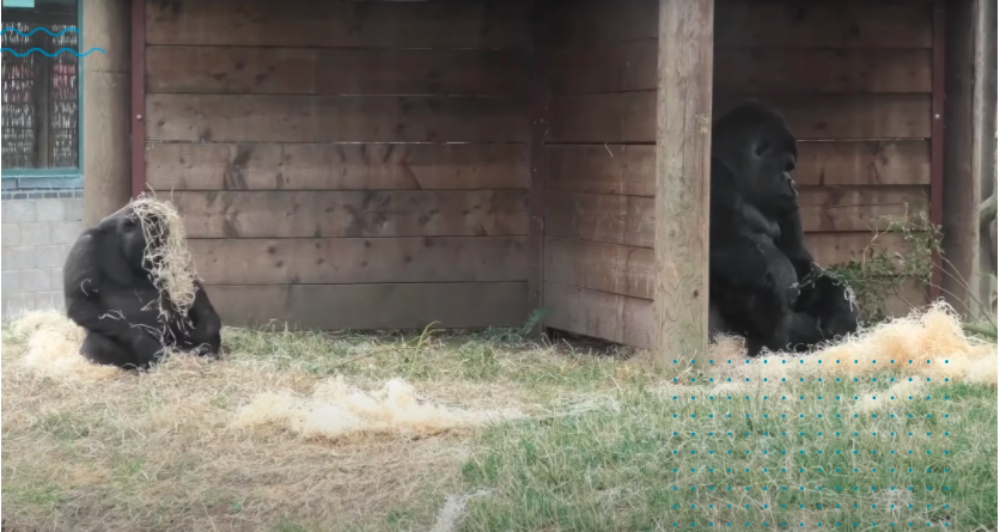 If you’re wondering why these gorillas seem to be acting exactly like a regular human family, with a tired dad and an overactive son who won’t take no for an answer, let me explain!

Gorillas, chimpanzees, and other apes are extremely close to humans on a genetic level!

In an article from Scientific American, Kate Wong explains the genome to us:

“In 1871 Charles Darwin surmised that humans were evolutionarily closer to the African apes than to any other species alive. The recent sequencing of the gorilla, chimpanzee and bonobo genomes confirms that supposition and provides a clearer view of how we are connected: chimps and bonobos in particular take pride of place as our nearest living relatives, sharing approximately 99 percent of our DNA, with gorillas trailing at 98 percent.” 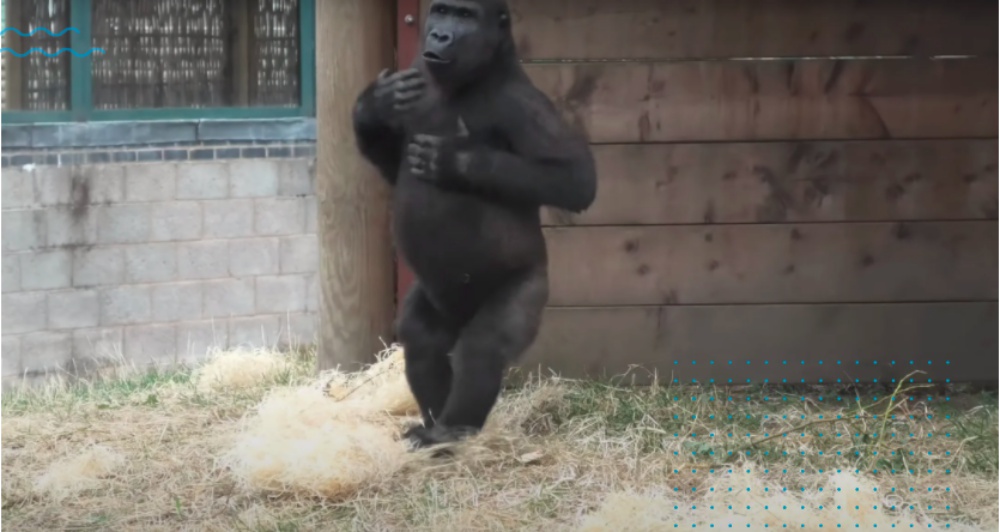 So not only do we look fairly similar, but we act fairly similar as well! There’s no question that humans are much more advanced in intellect, but gorillas and apes, in general, share a lot of our traits and can seem eerily familiar sometimes!

Maybe something as small as our children trying to get our attention! 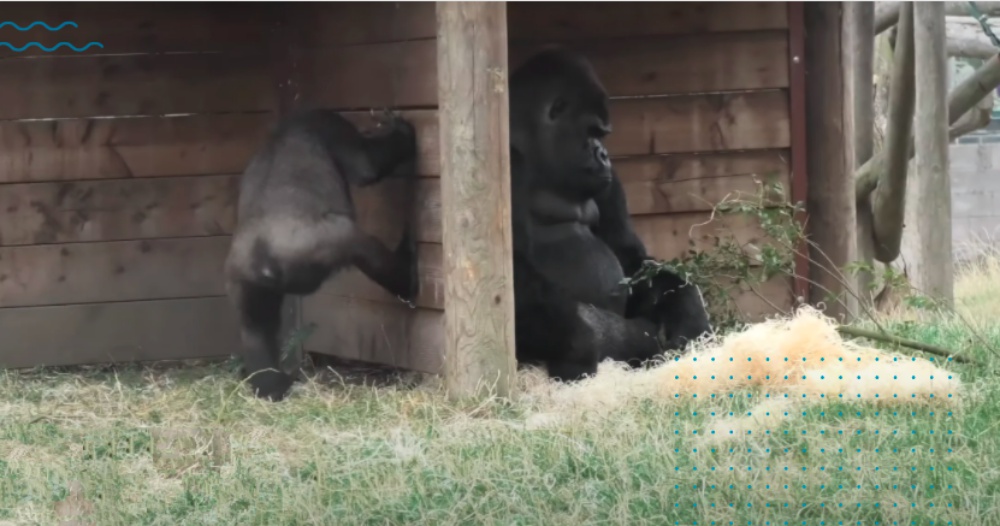 Even though Lope is beating his chest and hitting the other side of the wall Oumbi is trying to rest on, Oumbi sticks to his guns and continues ignoring the rambunctiousness of his kid. Until…

Despite his wanting to rest, Oumbi actually indulges his son a little bit, when he grabs some of the wood wool and puts it on his own head. 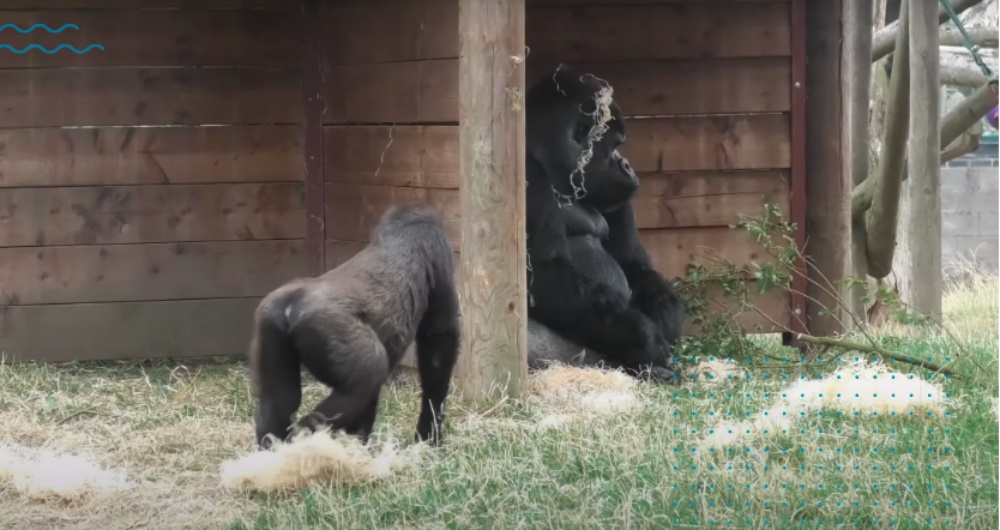 All parents give in eventually! You can’t help but want to see your kid smile or laugh! You just want them to be happy.

And like with most kids, if you give them an inch, they’ll take a mile.

Lope continues to play around and, following his dad’s lead, puts even more wood wool on, wearing it like some kind of budget Night’s Watch cloak! 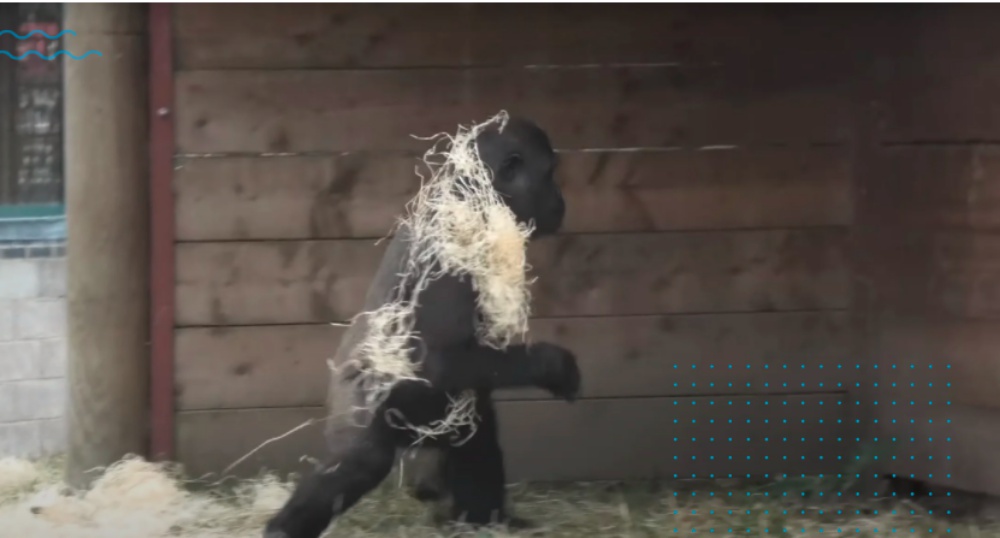 Lope is back to playing and the crowd is laughing right along with him, they are loving it!

They of course love seeing Lope spin and make funny faces like the one below! He’s completely adorable! 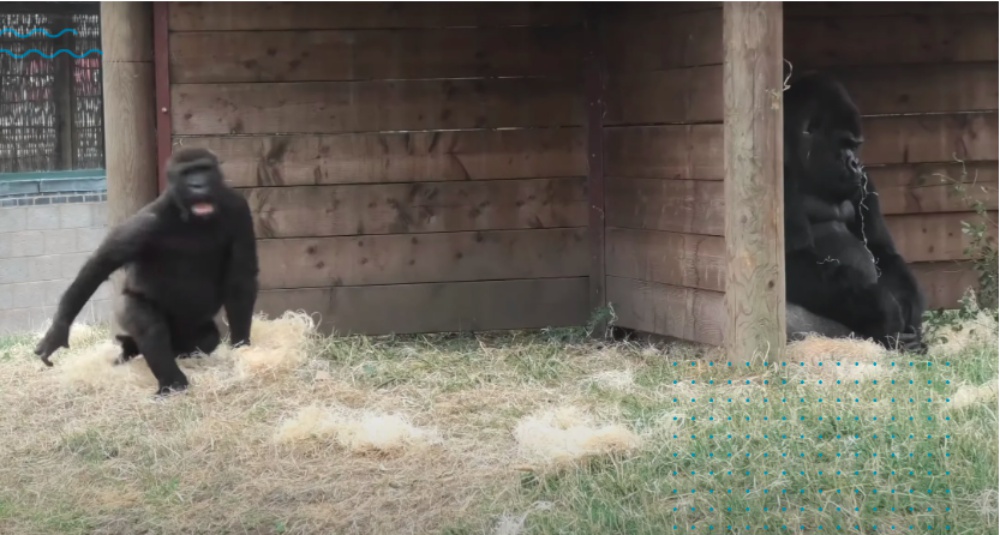 Science Daily helps shed more light on why these gorillas are acting and behaving so much like human beings!

“Researchers […] have discovered striking similarities between the emotional development of the bonobos and that of children, suggesting these great apes regulate their emotions in a human-like way. This is important to human evolutionary history because it shows the socio-emotional framework commonly applied to children works equally well for apes. Using this framework, researchers can test predictions of great ape behavior and, as in the case of this study, confirm humans and apes share many aspects of emotional functioning.” 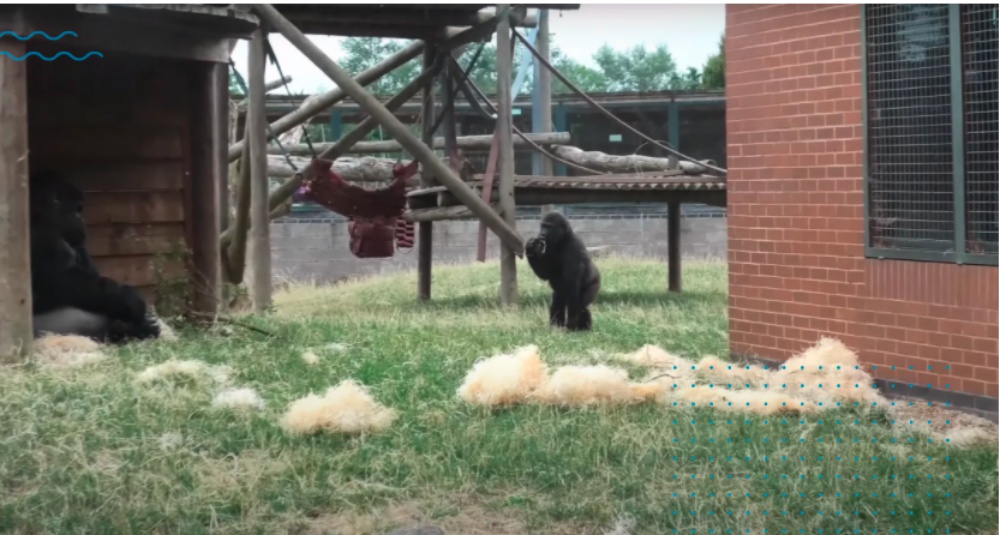 While they aren’t bonobos, the gorillas still share 98% of our DNA.

Both studies show us exactly why we can identify the behavior of apes so well, babies especially! So that feeling you get when you’re tired of your kid’s high energy? You can rest assured that is exactly what Oumbi is feeling! 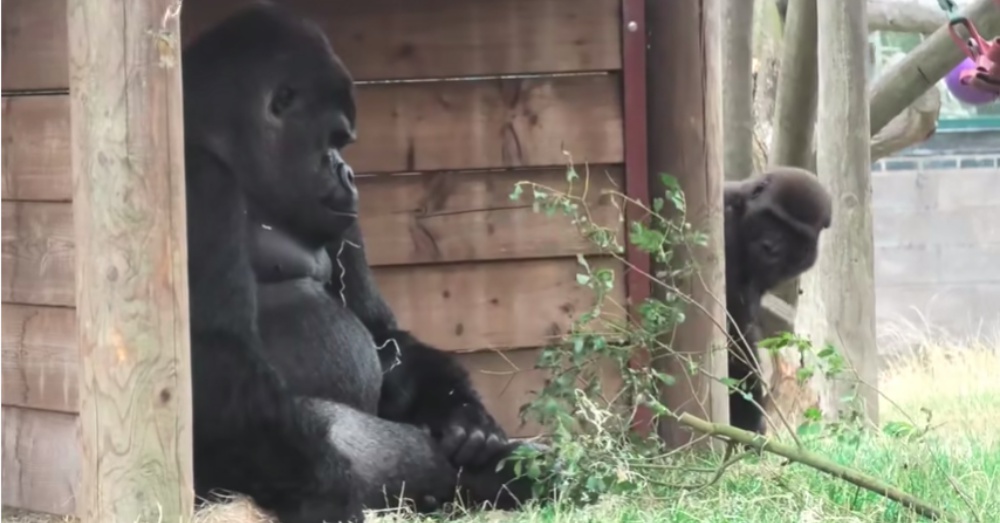 If you’re still not convinced, then take a look at Oumbi’s face after his kid has thrown a stick at him. 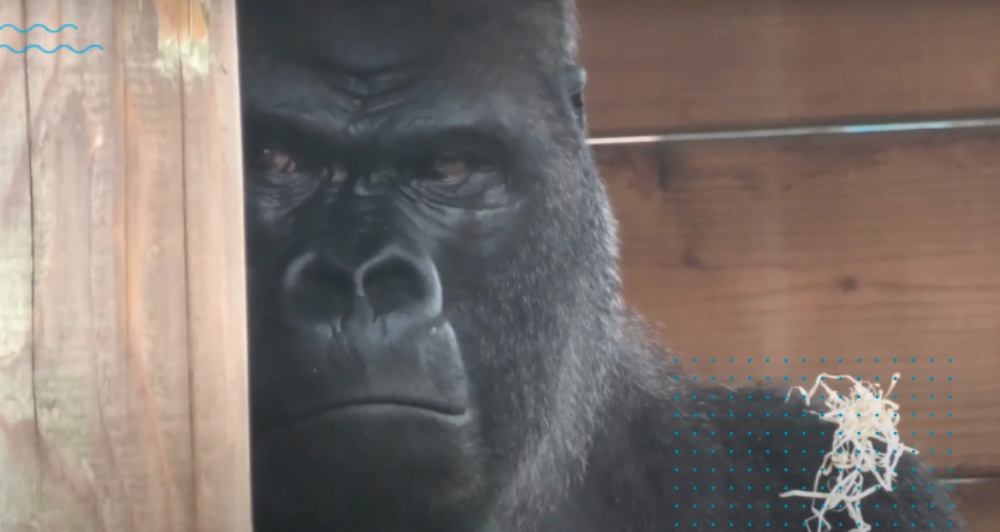 That face tells me everything I need to know!

You can check out the video below to see the cuteness for yourself, not to mention the crazy similarity this infant gorilla has to your everyday child!