It’s hard enough leaving your dog at home when you’re going to work or running errands – imagine having to leave a pup as cute as this good boy, Oshie, to go and serve your country abroad.

That’s exactly what Oshie’s mom, Nancy, had to do. She was deployed to Norway, thousands of miles from her home, her family and her fluffy baby. Needless to say – 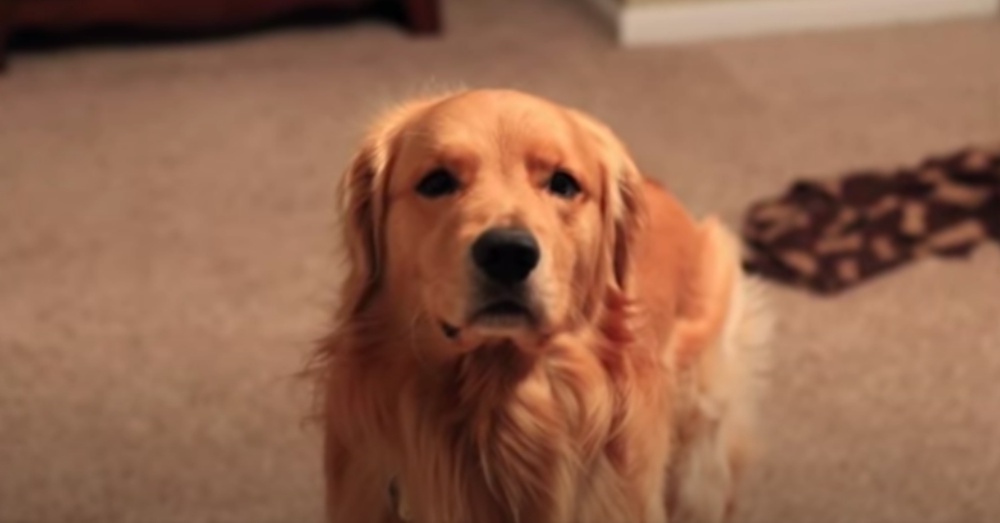 Before you doubt that dogs have the mental capacity to miss their owners, check out this quote from Psychology Today’s Stanley Coren:

“In recent times, science has progressed a long way […] and we now understand that dogs have all of the same brain structures that produce emotions in humans. Dogs also have the same hormones and undergo the same chemical changes that humans do during emotional states. […] With the same neurology and chemistry that people have, it seems reasonable to suggest that dogs also have emotions that are similar to ours.”

He goes on to say that dogs have about the emotional intelligence of a two year old child, and who hasn’t seen a toddler missing and crying for their parents? 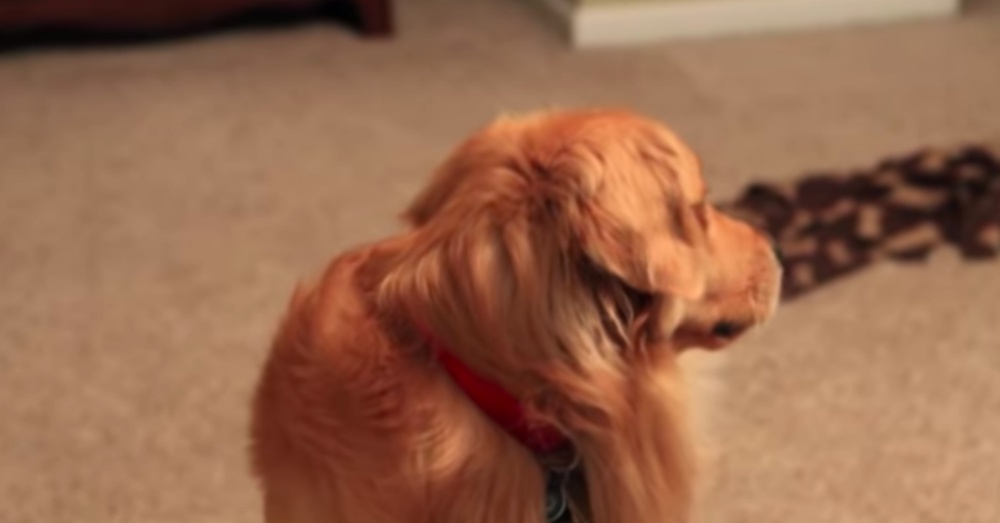 That being said, complex emotions like guilt, shame, or pride are outside of the spectrum of emotions that both dogs and toddlers can feel.

This may come as a shock to some, considering the number of “guilty dog videos” that can be found on the internet, but Dr. Coren debunks this in his article as well:

“… people might argue that they have seen evidence that indicates their dog is capable of experiencing guilt. The usual situation is when you come home and your dog starts slinking around and showing discomfort, and you then find that he or she has left a smelly brown deposit on your kitchen floor. […] What you see is his fear of punishment, he will never feel guilt.” 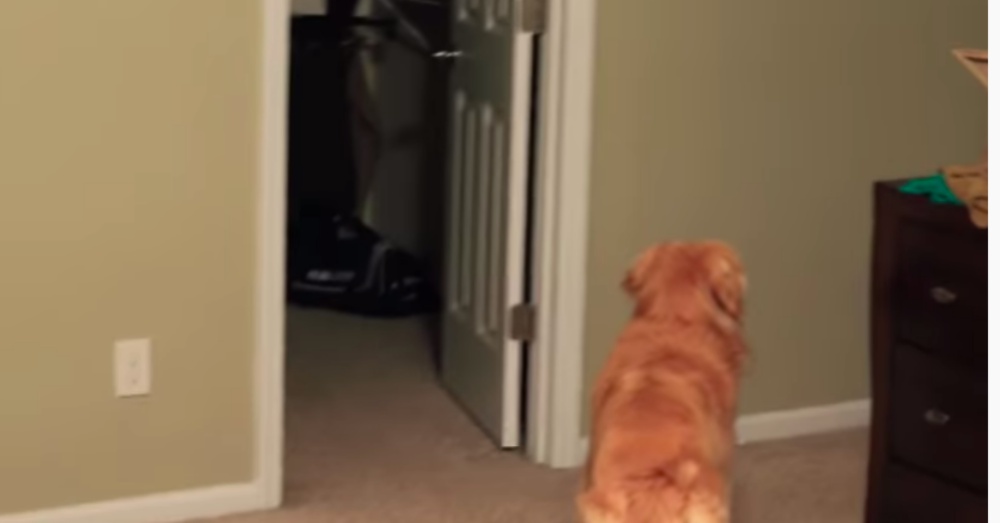 However, missing or longing for someone is different since it is really just a combination of two basic emotions – distress and love, which lead to another basic emotion when you finally see that person: excitement.

All three of which dogs can feel.

Then check out Oshie’s reaction when his mum comes home! 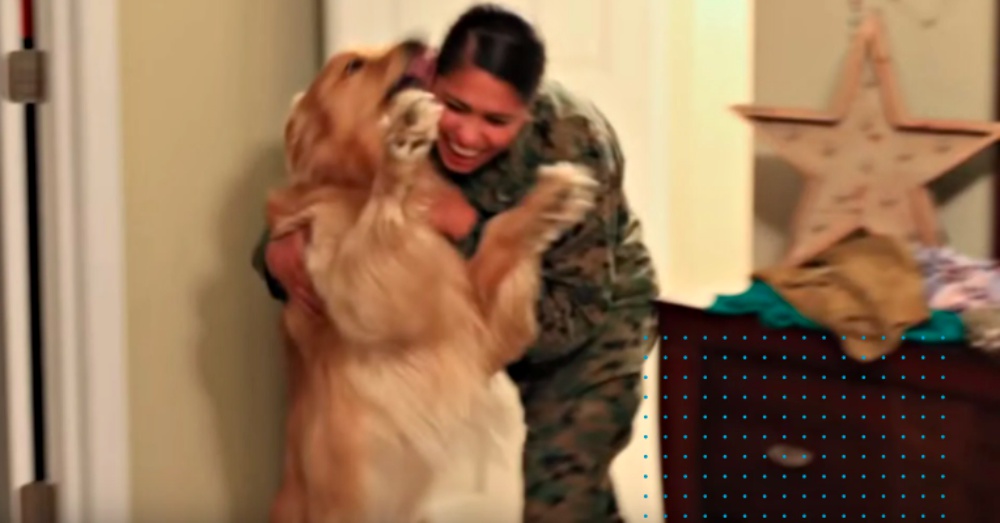 Excitement so strong modern cameras can’t even capture it properly. 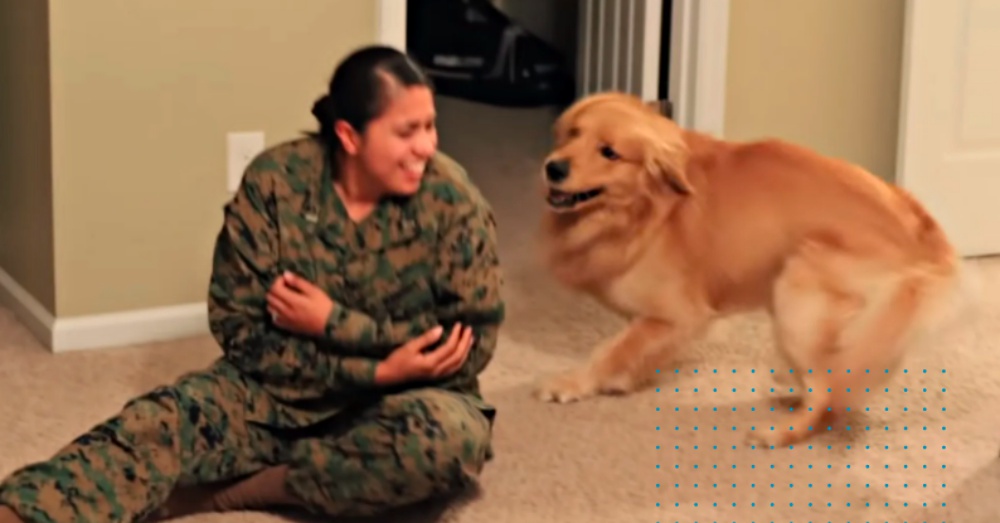 It goes beyond heartwarming to see a dog react so strongly to his mum coming home after being gone for so long. The excitement can be felt through his movements, his little tippy-taps, and the way he has absolutely no idea what to do with himself or Nancy!

He settles for jumping all over her and giving her many, many kisses. A pretty cute, logical conclusion, if you ask me. I don’t know too many people that would be able to take down a marine, but

Oshie manages to pull it off.
… And Nancy doesn’t seem to mind one bit, judging from her reaction. 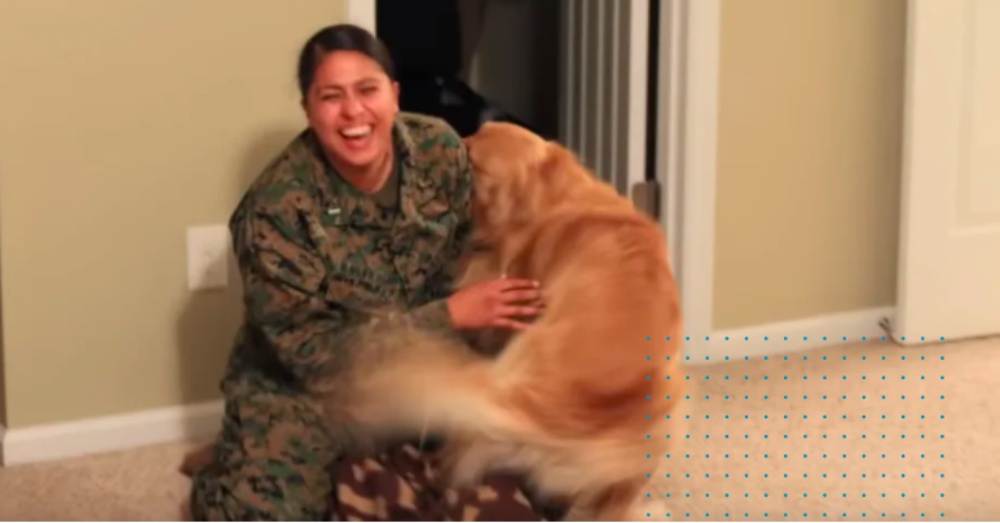 It’s clear by the look on her face, and Oshie’s unwillingness to get off of her, that Nancy is beyond happy to be back in Oshie’s warm presence. The very warm welcome home probably didn’t hurt, either. 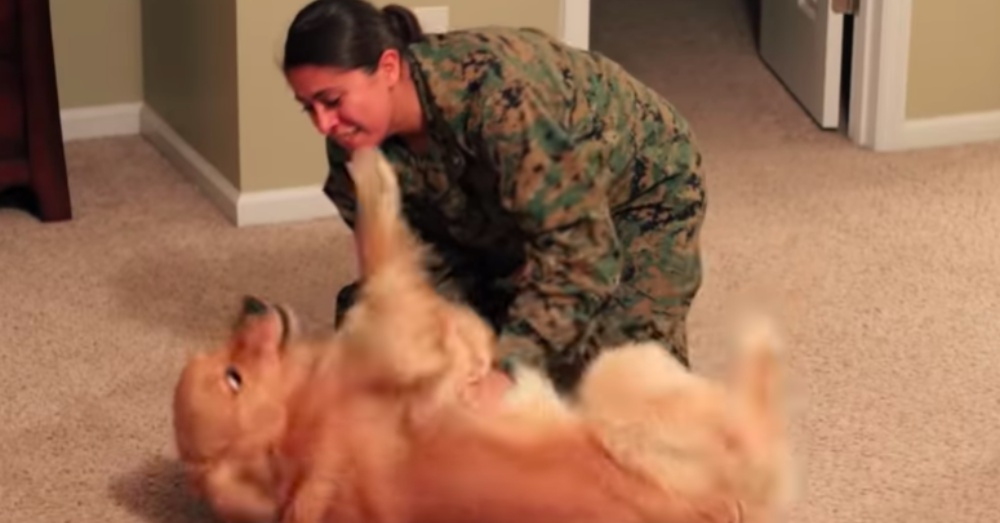 Look at the pure love in their eyes when they look at each other!
The video is beyond cute, and definitely worth a watch. You can check it out at the link below!