Cats and dogs have been enemies since the beginning of time. Their rivalry has been that of legends, so many households get very nervous introducing their cat and dog pets. They are just waiting for the inevitable fight to ensue. But that is not the case when two golden retrievers and one husky were introduced to a litter of newborn kittens!

A video of two golden retrievers and a husky loving on newborn kittens has gone viral because of how adorable it is!

The owner of the of dogs must have known how loving the dogs were because they were introduced to kittens very early! 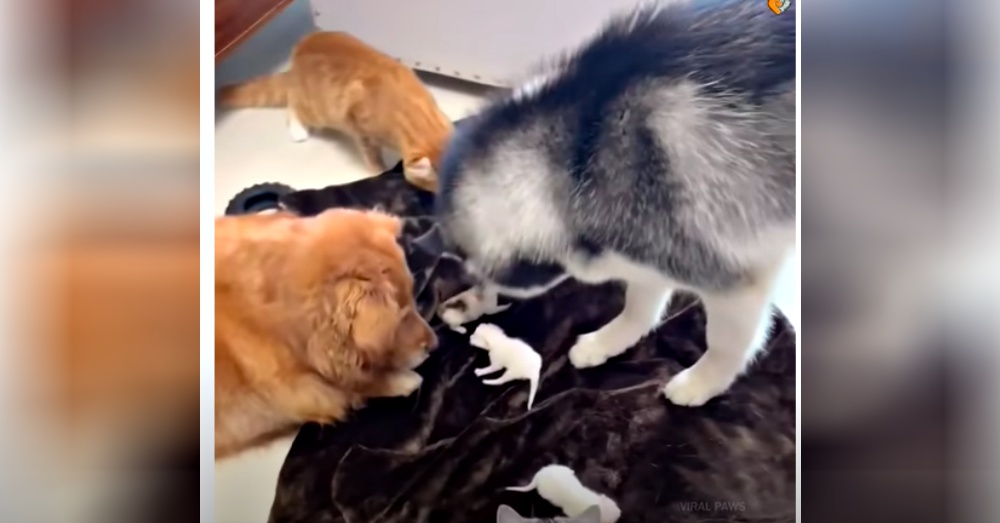 The kittens are so young they cannot even open their eyes yet.

The newborn kittens were placed on a blanket and all three dogs turn into gentle giants around them. All three dogs are gentle from the very beginning and slowly start to sniff all the kittens. The golden retrievers even give the kittens space and laid down around the blanket instead of getting on it. The husky is more forward and is on the blanket with the kittens to get a closer look!

The kittens are such newborns that the person in charge has to feed the kittens through a syringe! 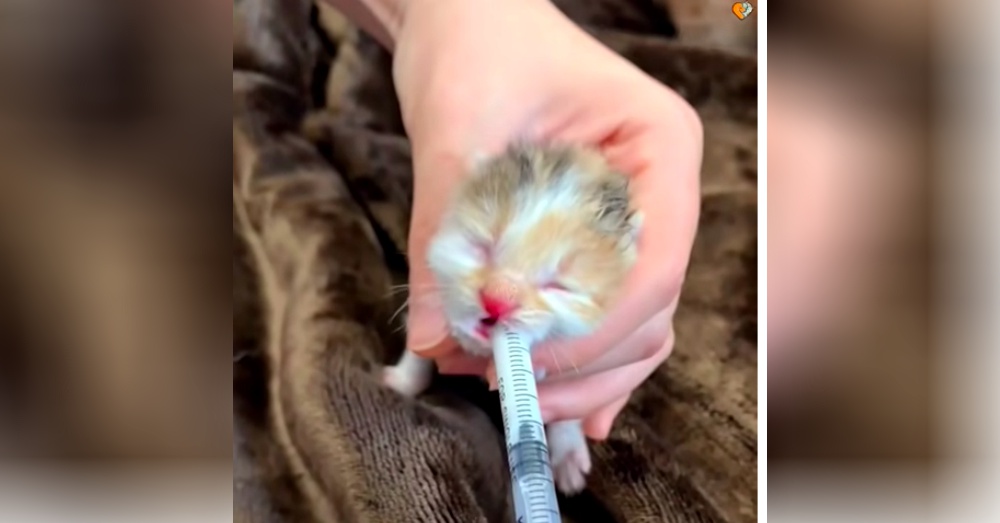 After the initial introduction, the dogs are still very interested in the kittens. They all put their heads on the side of the wagon, that the kittens are in, and just watch their view. These gentle dogs are already protective! The kittens must smell the dogs because one tries its very hardest to get as close to the dogs as it can.

These kittens know they are safe with their new giant buddies. 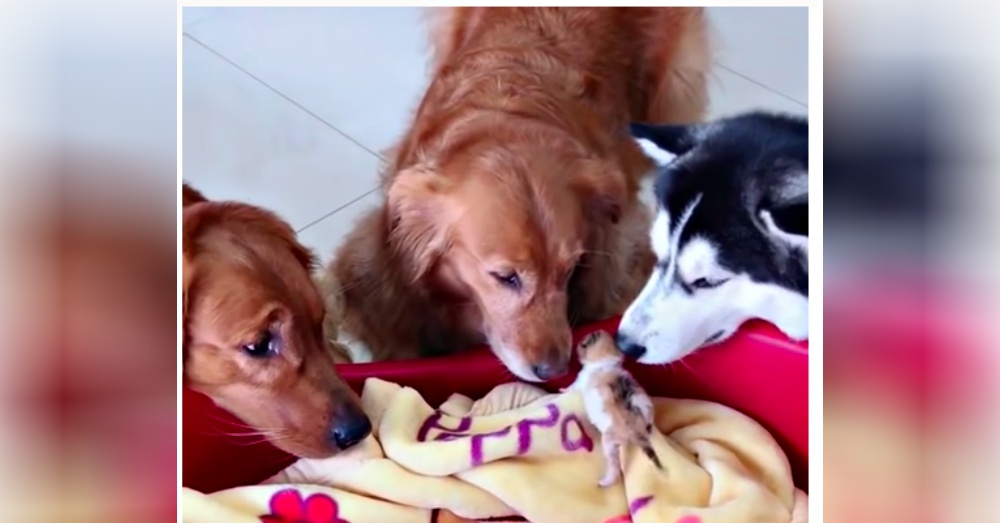 When the kitten finally makes it to the dogs, they continue the outpouring of love. The husky nudges his nose to keep the kitten in the wagon and protect it from not falling out. While one of the golden retrievers starts to give the kitten some kisses. That is one loved kitten! The last golden retriever just watches in awe, like everyone that watches this video!

At one point the golden retriever lays in the wagon with the kittens! 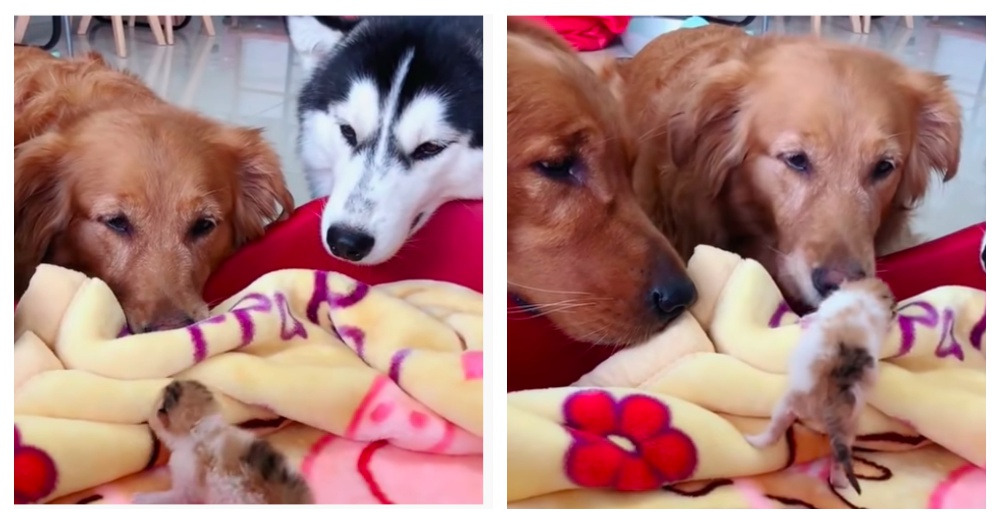 The golden retriever is giving kisses to all the kittens, as they all try to stumble over to the dog on their own. These kittens are such newborns that they do not even have stable legs yet and tumble and fall on their walk. The husky is not one to miss out and is right beside the golden retriever to spread his love as well.

What is amazing about this video, is that it has a few times jumps! The viewers can watch the relationship grow between the three dogs and all the kittens. When the kittens grow, just a tad bit older, and are able to walk around on their own, they are all over the dogs! They love their furry friends and these dogs love them too. The husky, at one point, even puts his front leg around a kitten to keep it closer. 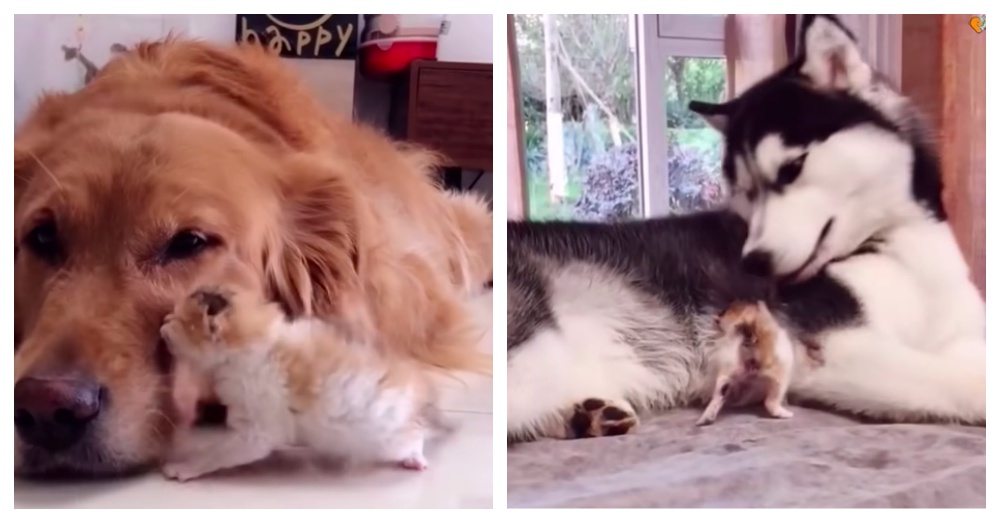 These dogs are the kittens safe place!
The kittens do not want to be anywhere else except next to their protectors. When one of the golden retrievers is laying its head down, he allows one of the kittens to snuggle up under his head and ear. The kitten all but disappears in the fur!

Check out the adorable video right below and get ready for your heart to melt!
Please SHARE this with your friends and family.