Have you ever wondered what happens to pet animals when their owners die? Does another family member come to rescue, or an animal shelter takes over?

Well, usually people in case of an emergency make the appropriate arrangements for somebody else to step in and take care of their pets, but unfortunately, this isn’t always the case, especially with elderly pet owners.

In today’s story, we will see how a neglected cat “regained” her life after being saved and delivered to an animal shelter.

This story might sound familiar as there are many pets out there that find themselves alone in the world and often neglected when their elderly owners are unable to care for them. 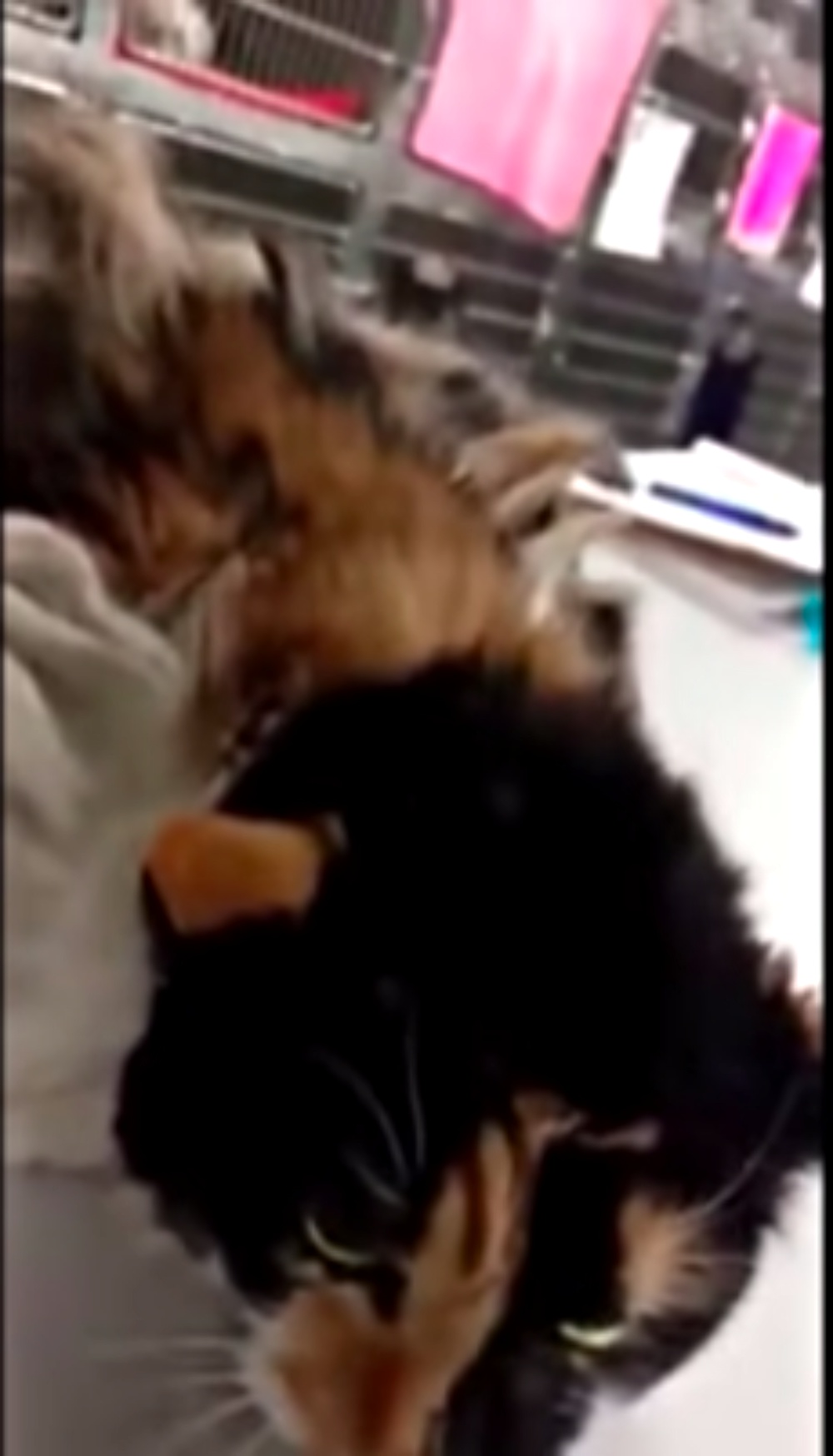 This animal below isn’t a huge spider but a calico cat with several pounds of matted fur on her. This poor animal was transferred to an animal shelter by the people of Animal Rescue League Shelter & Wildlife Center after her elderly owner passed away. 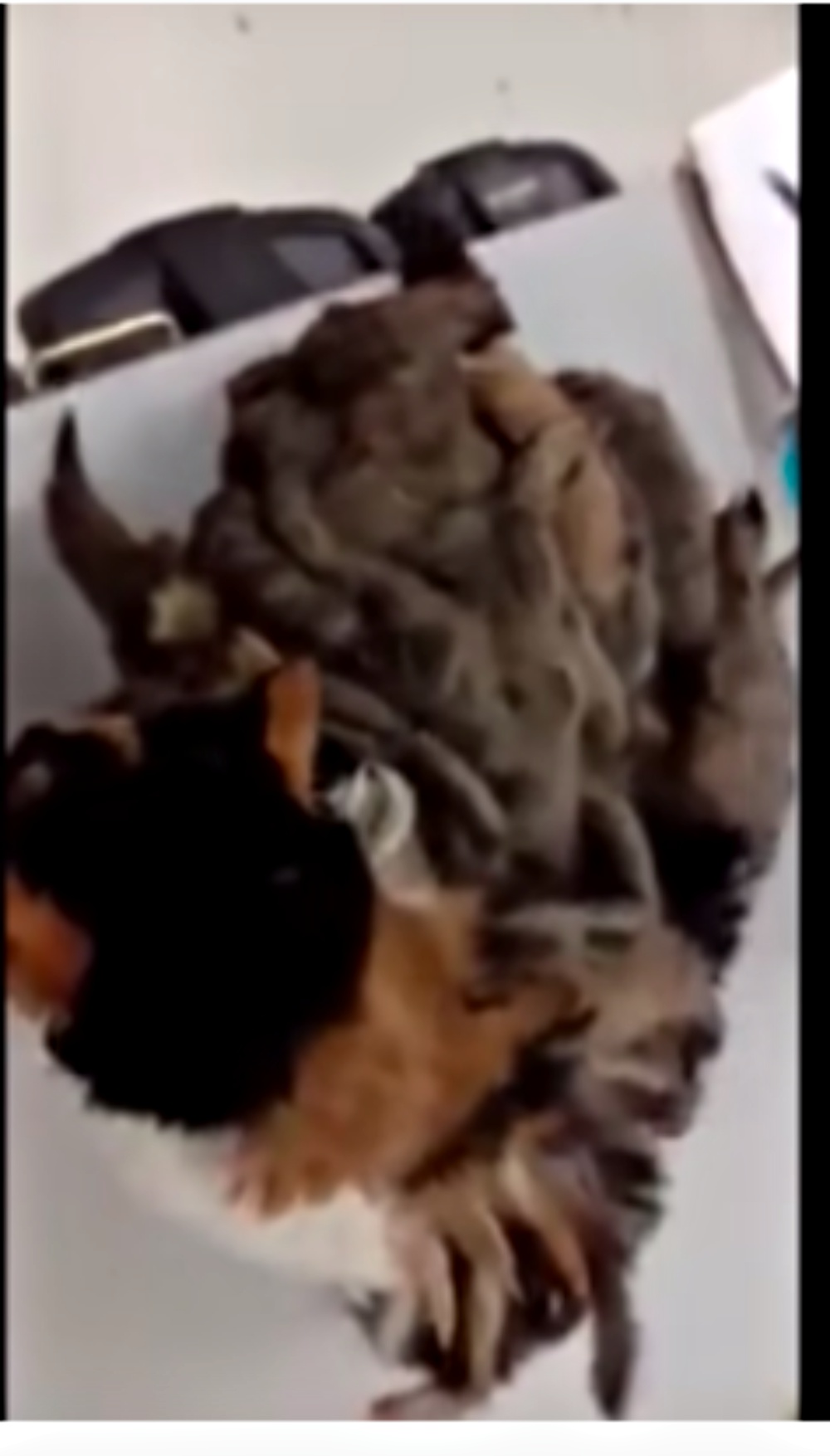 When the people in the center saw the cat’s condition, they were shocked by the amount of matted fur on her and they were surprised how this animal was even able to walk around. It must have been really difficult for the poor cat to have to move with this excess of hair on her! 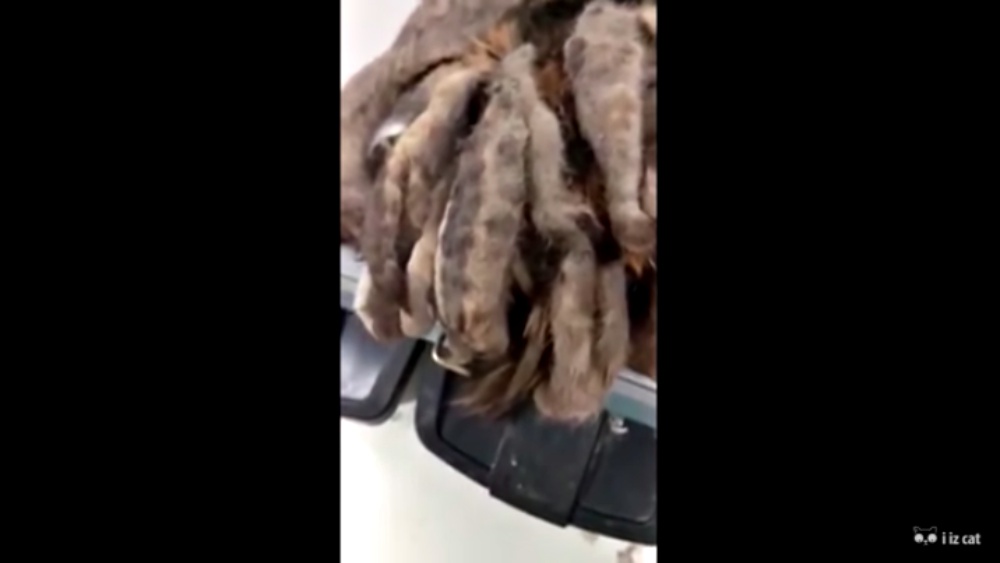 The fur had “developed” what it looks like dreadlocks to us, all this thick and dirty mass was probably putting in danger the animal itself as the cat was unable to clean herself for a long time, more like years.

As you can see in the video posted on YouTube, the people at the center didn’t waste a minute and immediately started their “cleaning” operation to get this poor feline back in shape! 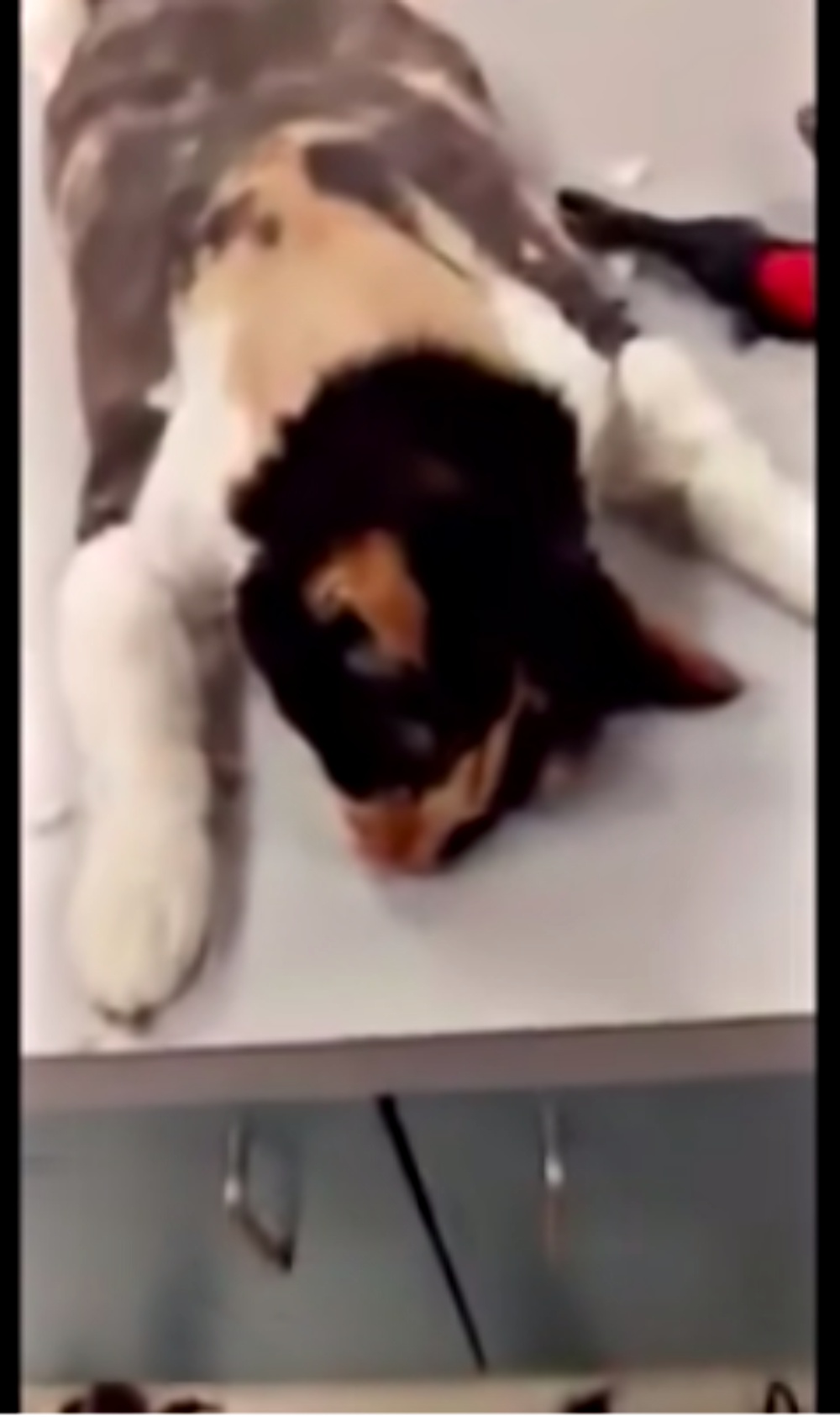 The cat had to first be sedated in order to make sure that she would stay immobilized during the shaving process, and probably because she wasn’t used to be around so many people. Soon enough, they started shaving the poor animal and getting rid of the dreadful dreadlocks. 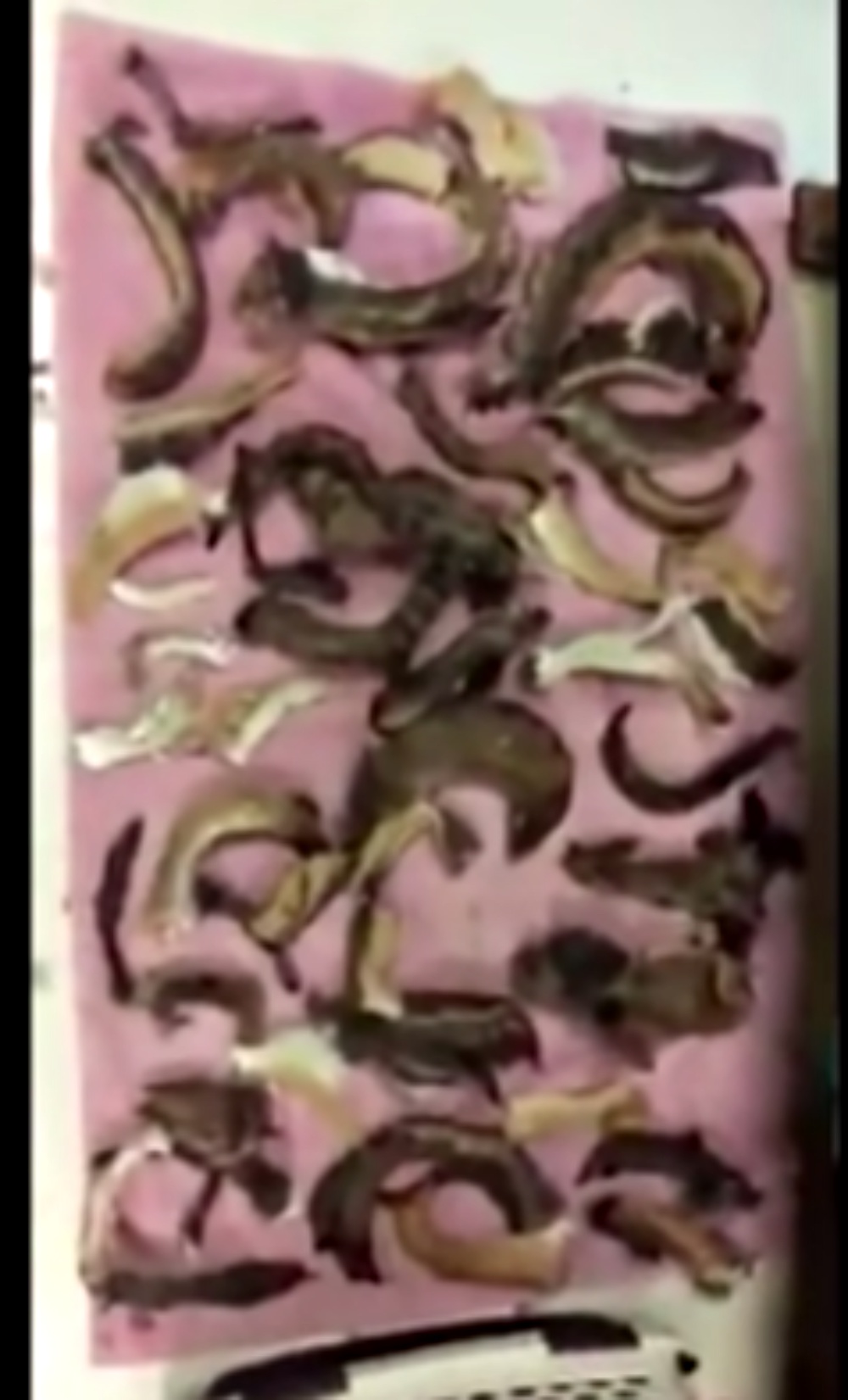 The result as you can see is incredible, as it is like a whole new animal was hiding beneath this heavily matted fur. Finally, this beautiful calico cat will be able to move around freely and start her new life with a whole new look!

The cat will soon move to her new house as a distant relative of her previous owner seems to have volunteered to adopt her and offer her a new and happy home.

One of the most important things in this video though is the final message that the video’s creator wanted to share with us, “please remember to not only check on the elderly in your community but also check on their animals to prevent heartache like this”. 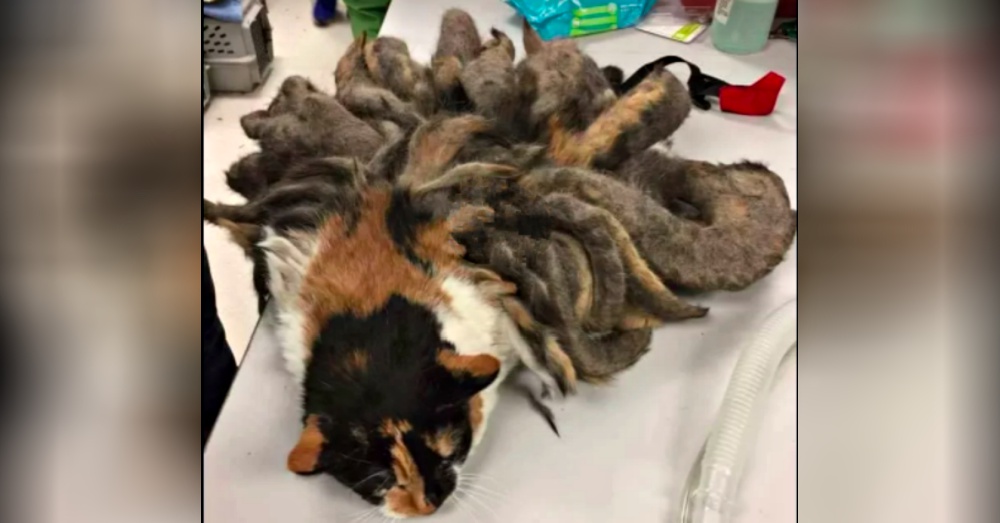 And how true this message is as the animals are living beings too and especially the domesticated animals who depend a great deal on their owners. So, if you ever find yourself doubting the living conditions of an animal and you see them neglected, don’t hesitate to contact the appropriate services and save a life!

If you would like to see the whole “makeover” video, check out the video below.