We might think that animal friendships occur only between two animals of the same species. However, there are frequently occurrences of animals of different species being seen as friends; for example, ducklings and dogs, kitten and mouse, or even something unusual like giraffe and an ostrich. Nature works in mysterious ways, and we are constantly being surprised that it does.

This time, it’s an unusual friendship between a kitten and a chicken. 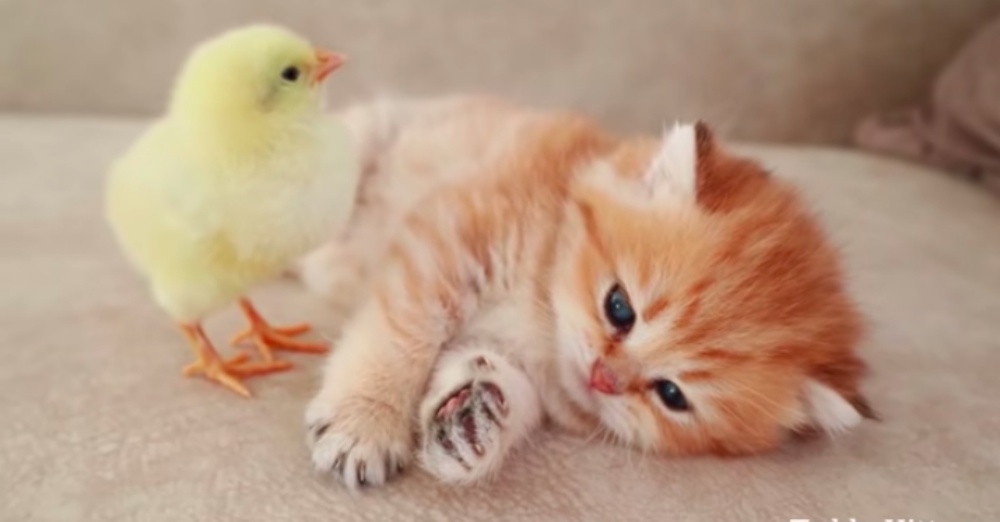 Today’s story revolves around the unusual friendship between this kitten and a chicken. Irina, an avid cat lover who owned several British Shorthair cats in her home, decided one day to let a baby chick be introduced to her adorable kittens.

She wanted to know how her kittens would react, especially when meeting an unfamiliar face for the first time. The first kitten she had in mind was a golden-black tabby kitten named Pixel. Irina thought that she would be the perfect kitten to do the little friendship experiment with the baby chick.

Just look at how adorable this bond is between a baby chick and a kitten. 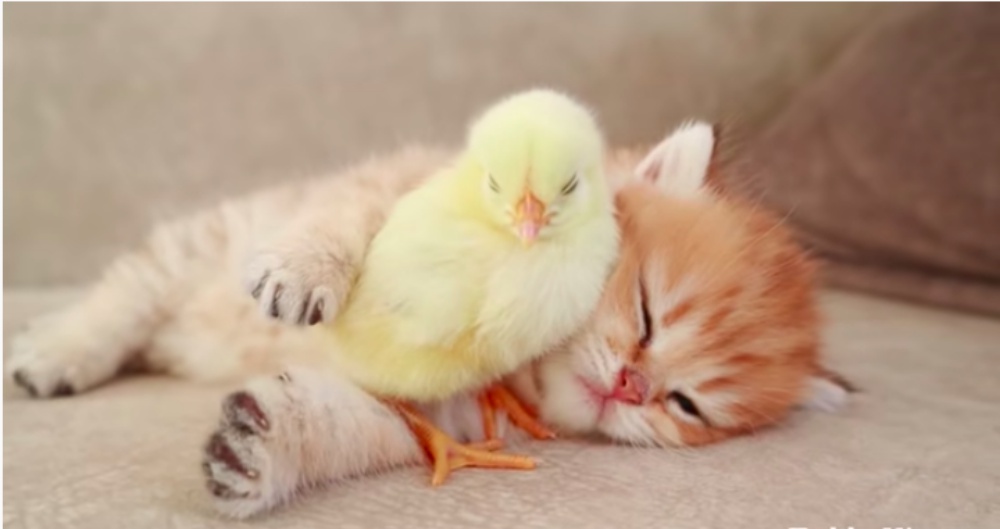 Despite being just several weeks old, the little kitten was already oozing with curiosity. She would roam around the house, sniffing each unfamiliar object, and even trying to touch it with her own paws. As Irina saw Pixel actively exploring her surroundings, Irina decided to place the baby chick next to her and see how she would react.

As every curious cat would do, Pixel started examining the baby chick by sniffing her all around. While doing so, Pixel makes sure that she would not let her guard down, even though she knew how little the baby chick was compared to her. It did not take long for Pixel to realize that the baby chick was harmless. That was when they started to get along. 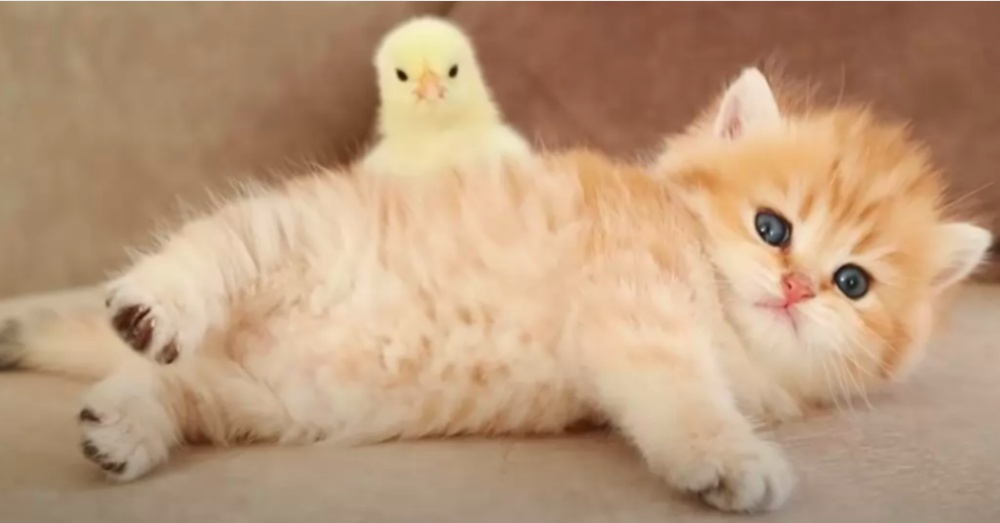 At the same time, the baby chick was not intimidated by the kitten. In fact, she felt surprisingly comfortable around the curious Pixel. Even though Pixel was bugging her with her paws, the adorable baby chick continues to follow her around. Later, you would find them playing tag with each other. The adorable thing was that Pixel knew how gentle she should be while playing with the chick, as she does not want to hurt even a feather of the baby chick’s little body.

After playing is the napping.

Everyone gets tired of running around and playing. That applies to this active feline and baby chick. After they were exhausted, the both of them would take a quick nap TOGETHER. As Pixel laid comfortably on the sofa, the baby chick carefully approached Pixel on the face as if she was trying to find a cozy spot for herself. 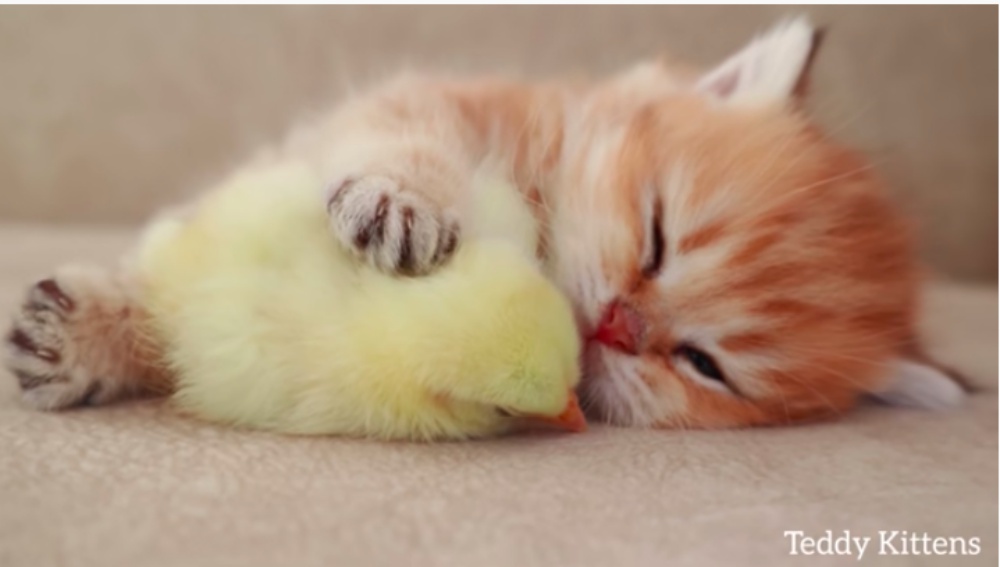 It’s a big “aww” moment as you can see them cuddling up with each other. The baby chick would make sure not to make too much movement to wake little Pixel up. At the same time, Pixel would hug his little chicken friend while dozing off to dreamland. The sight of them sleeping together is just heartwarming. 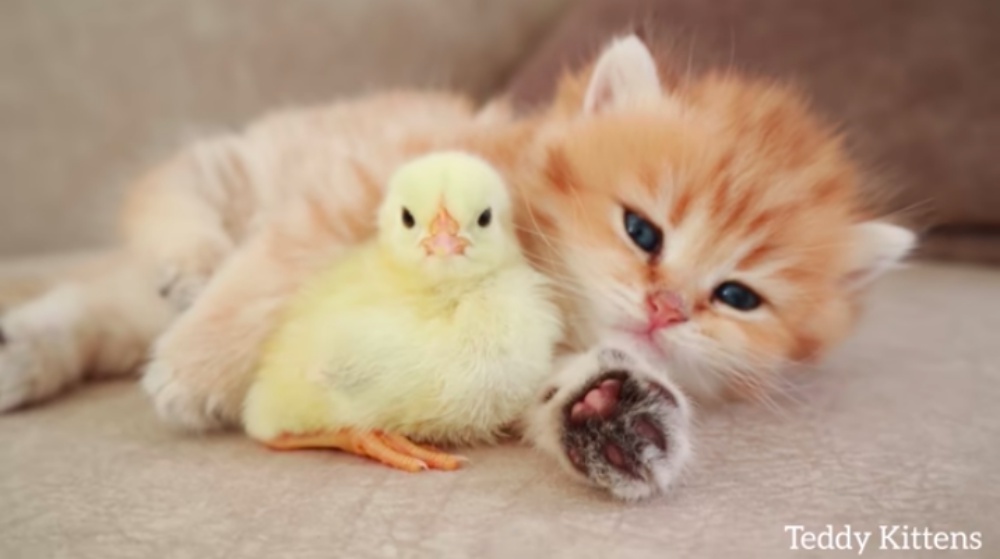 The chick and Pixel’s unusual friendship has tugged plenty of heartstrings on the internet.

Irina had surprisingly lots of cats and kittens at home, and despite being allergic to cats, Irina has never let her allergies stop her from loving these adorable creatures. To see the full clip for yourself, you can do so by clicking on the link below. If you want to be part of Irina and her kittens’ daily, wholesome adventures, make sure you check out the channel Teddy Kittens on YouTube. Surely, you’ll drown with the overflowing cuteness in the channel.