First Class Sergeant Luciano Yulfo is retired United States Army and he was brought out to center court during a Knicks game at Madison Square Garden. They wanted to honor him, but it was more than being recognized for being in the military. The “Hoops for Troops” program put on by the team had something extra for him.

After spending 36 years in the military, Sgt. Luciano Yulfo was due to retire. He had served in Operation Iraqi Freedom and Operation Enduring Freedom but was injured in 2014. It occurred when he was deployed in Afghanistan and he received a medical retirement from active duty.

He spent 2 years at the Walter Reed National Military Medical Center after his injury. It was April 2016 when he was finally retired.

He returned to America and wanted a service dog to help him with the injuries he suffered while on active duty. It was 18 months later and he was still on the list waiting for a dog. They had a surprise for him, and on 9 November, he was at the game on a Military Appreciation Night. 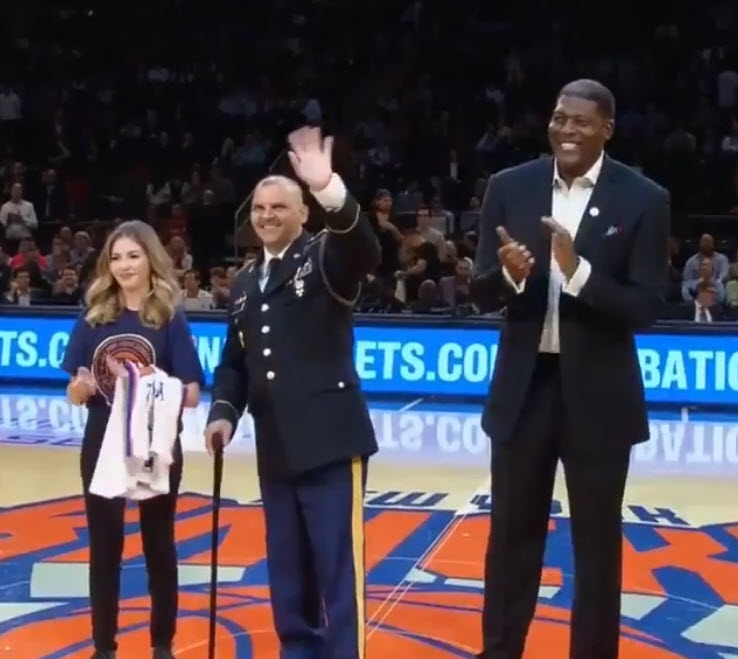 The organizers brought him to the court between quarters and he was presented with a personalized Knicks jersey. The next announcement, however, was that he had a new service dog, Murphy.

“Paws of War” donated Murphy. They are an organization that trains those rescue dogs and then places them with the United States military veterans. Every dog is trained to care for the veteran that will be with them.

They help to comfort the individuals when they have PTSD and others are trained to fetch items when they can’t walk. When Sergeant Luciano Yulfo received his gift, he was so surprised that he dropped to his knees. It was an emotional moment that you will love seeing in the following video: