This Pup Was Unable To Stand Or Walk! Rescuers Stepped In And Got Him Back On His Paws!

This senior dog had been living on the streets, unable to move due to injuries he sustained after being pulled from a sewage tank. The poor pup couldn’t even stand on his own four feet and it wasn’t until kind strangers decided to help.

When rescuers from the rescue organization Animal Aid Unlimited showed up, the elderly pooch was visibly relieved. He clearly welcomed the rescuers approach and relished in their attempts at comforting him. The rescuers placed a blanket around the pup, gently lifted him, and carefully brought him to safety. 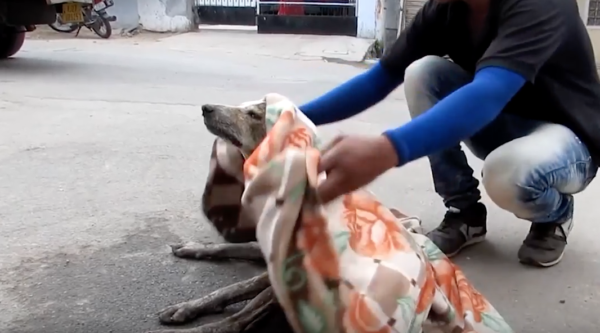 Once he was safe, rescuers began the process of helping him heal. They bathed him, fed him, and gave him the love he craved. In the early stages the poor pup didn’t have the strength to eat, but these rescuers were determined. They fed him through a syringe until he was able to eat on his own. The rescuers also diligently worked on helping the pup stand and walk again. Low and behold, this pup was just as determined as his rescuers! At one point he couldn’t even stand, now the pup is back on his feet and he has hit the ground running. This senior pooch is moving faster than ever before and it’s all thanks to the dedicated people that took the time to help him on his road to recovery. The pup is now living a happy life and moving fast, despite his age.