Seal Slaps Kayaker In The Face With Octopus, Equipped Colleague Captures The Video With A GoPro

Kyle Mulinder was out kayaking with his friends off the coast of New Zealand when he came face to tentacle with some fairly forward marine life.

The group was paddling in the Pacific, near Kaikoura, on New Zealand’s South Island, where dolphin, whale, and seal sightings are not uncommon. This was more than just a sighting, however, this was a swim-by happy-slapping, which Mulinder will never forget.

A member of the small flotilla, Taiyo Masuda, captured the moment a fur seal slapped Mulinder in the face with an octopus on his GoPro camera. 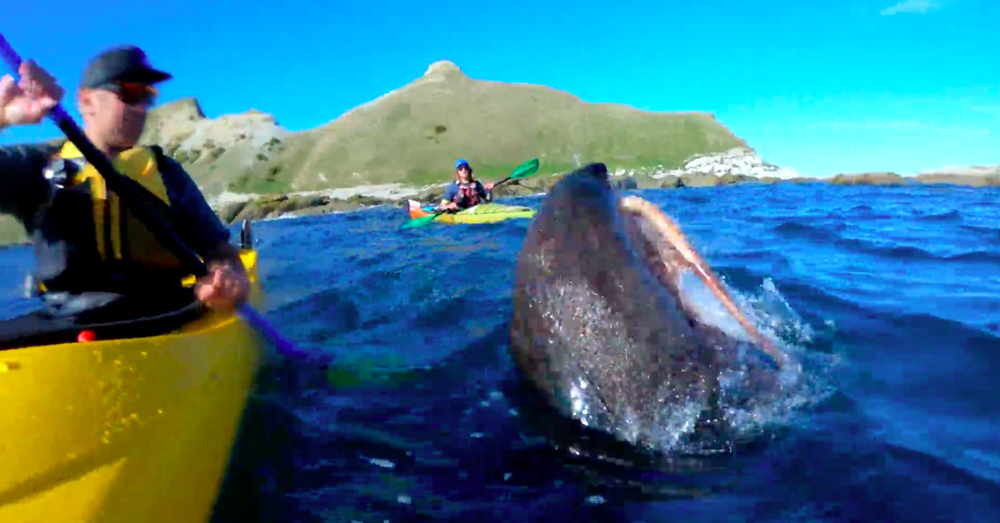 Source: YouTube/Guardian News
The seal and the octopus emerge from the water.

‘We were just sitting out in the middle of the ocean and then this huge male seal appeared with an octopus and he was thrashing him about for ages,’ Mulinder told Yahoo7 News. 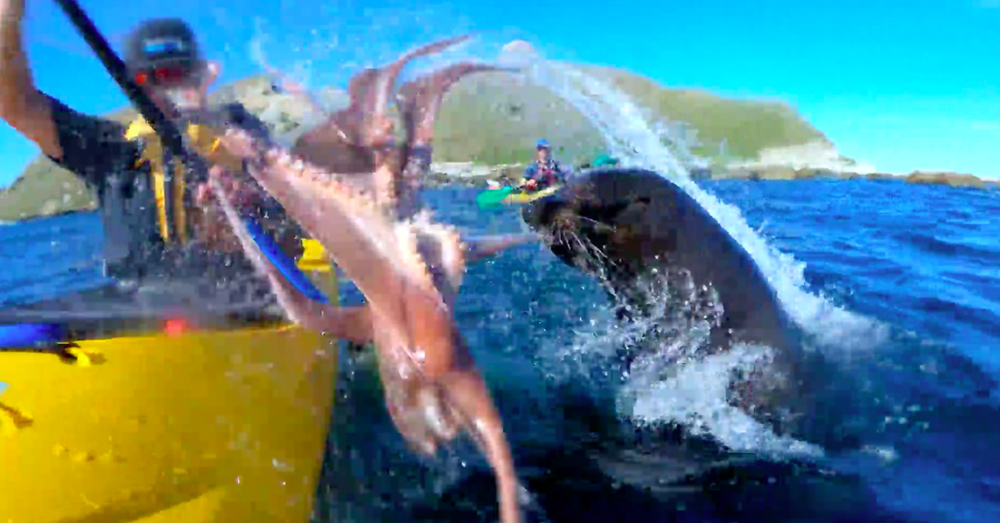 Source: YouTube/Guardian News
The seal slaps Mulinder in the face with the octopus.

The sea and octopus were caught up in an underwater altercation that spilled up and over into the air, taking Mulinder as collateral damage.

Mulinder sat stunned in his craft as the seal and octopus fell back into the water to continue their fight. Perhaps the seal though Mulinder was a hard target he could use to weaken his eight-legged foe. 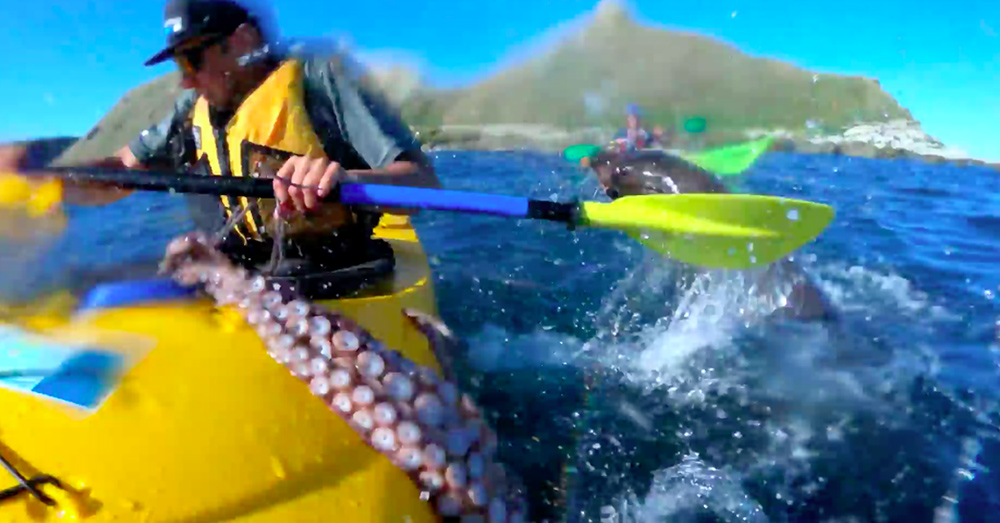 Source: YouTube/Guardian News
Mulinder was left stunned, and but octopus wasn’t ready to reenter the fight just yet.

Realizing what he had just been slapped across the face with, the kayaker cringed.

“I was like ‘mate, what just happened?'” he said. “It was weird because it happened so fast but I could feel all the hard parts of the octopus on my face like ‘dum dum dum.'” 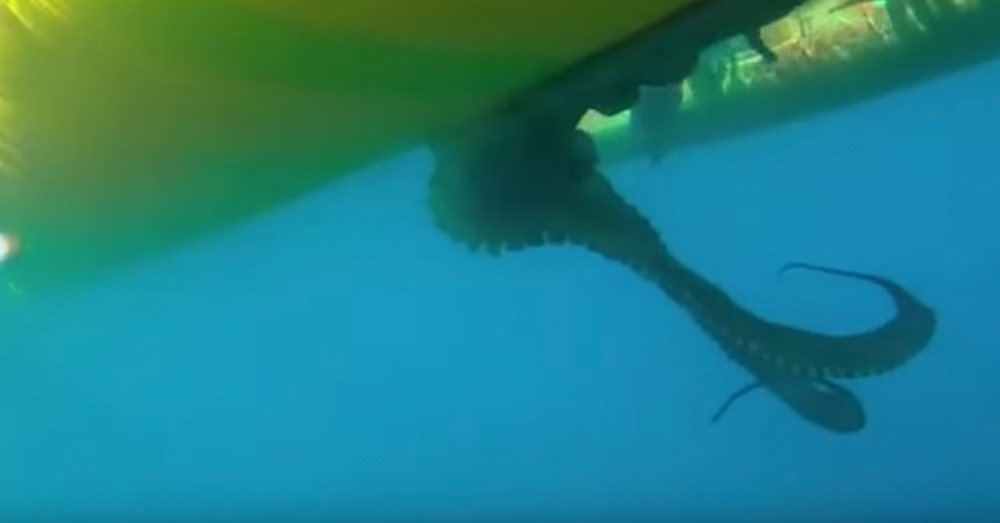 The octopus cringed to Mulinder’s kayak for a few seconds as the fight continued. But, in the end, the seal was victorious. 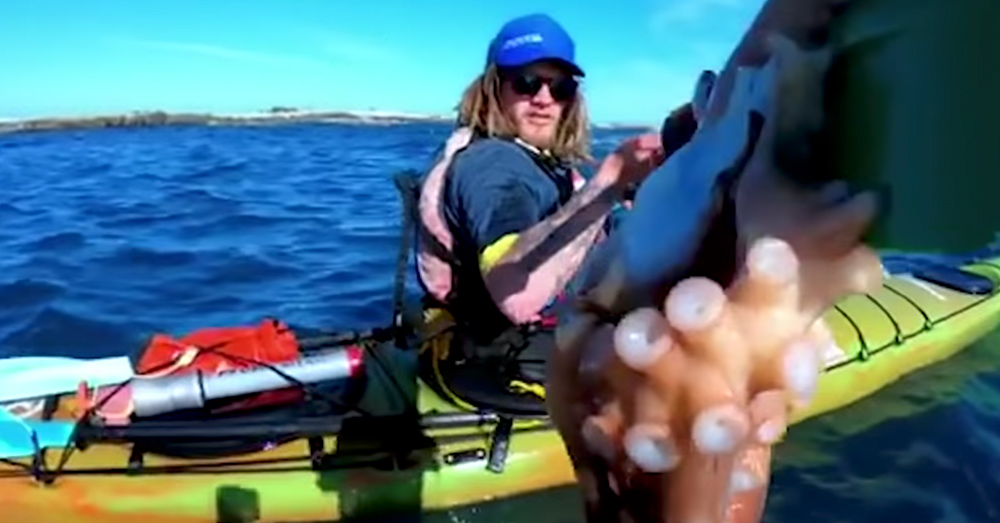 Source: YouTube/Guardian News
A kayak instructor helped remove the octopus and place it back into the water.

It’s not out of the ordinary that these two species would go flipper to tentacle. Bringing a human into their dispute is quite rare, although Mulinder may feel a little trepidation the next time he paddles out to sea.
See the fight, and the octopus, unfold in the video below!