Stray Dog That Was Scared Of Humans Just Needed A Hug

It is so heartbreaking to see a homeless dog. They’re usually scared and emotionally broken. All you want to do is give them a loving home. And that is what Hope For Paws attempted to do for a stray who was so scared she was visibly shaking.

Volunteer Eldad Hagar arrived on the scene to witness a very frightened dog. As he approached, the little pooch was desperate to get away, going as far as trying to escape into a corner of the wall.

The little dog kept moving her head around and Eldad was finding it impossible to loop her with the snare. The poor pooch continued to noticeably shake. Finally, she relented a bit when he extended his hand to her. It was enough for her to allow him to lift her up into his arms.

Eldad ended up naming the cutie McKenzie. McKenzie’s ordeal prompted Eldad to share on YouTube that it was important to show the dog a little love. She definitely needed it. 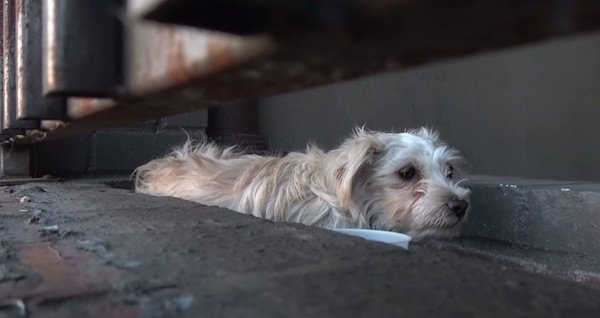 Eldad added, “Please watch this video until the end and see how confident she grows by the second! I am so proud of her!!!”

After her rescue McKenzie went on to be fostered by Foxy and the Hounds where she eagerly awaits a forever home.