The Dangers Of Salmon Poisoning And Fish Disease In Dogs

One of the most prominent ways that we show our dogs we love them is by sharing our food with them. Even when we know we shouldn’t be encouraging them to expect handouts from us, how many of us have snuck the occasional little piece of steak or chicken to our pets underneath the dinner table?

Especially in the summertime when we break out wonderful items such as grills – it’s a great time to be a dog at a backyard barbecue. However, what we shouldn’t be doing is sneaking bits of raw meat to our dogs, specifically salmon. Spring and summer can be times when many of us like to get out into nature and take our dogs with us on various outdoor activities, such as fishing. But whether we catch raw salmon ourselves, or simply purchase some for an alfresco evening dinner, what we should never do is share the raw fish with our dogs.

It can actually have disastrous consequences on their health.

Salmon Poisoning Disease, also known as fish disease, is a rare one – but if contracted, it can be potentially lethal for dogs that consume certain types of raw fish.

Salmon, as well as other anadromous fish – fish that swim upstream in freshwater to breed – including trout, shad, and sturgeon, can all be infected with a parasite called Nanophyetus salmincola.

Generally speaking, the parasite is relatively harmless. However, if the parasite itself happens to be infected with a rickettsial organism called Neorickettsia helminthoeca then it can cause salmon poisoning, or fish poisoning, to happen.

Dogs and other canid animals are the only species who can be affected by salmon poisoning. Other animals, such as felines, raccoons, and bears, can consume the same raw fish without any issues. However, canines don’t have the same luck.

In fact, salmon poisoning amongst dogs happens most commonly around the Pacific Coast, as well as up in the Cascade mountain range.

That is not to say that your dog can never have salmon, it just means that in order to avoid potential infection, you should thoroughly cook the fish before feeding it to your dog. Fully cooking fish will kill potential parasite problems and keep your dog safe from poisoning.

Normally, the clinical signs of Salmon Poisoning will start to appear within six days of your dog having consumed an infected fish. If the poisoning is left untreated, your dog can die within 14 days of having eaten raw, infected fish meat.

And it’s nothing to mess around with either, as 90% of dogs who show signs of salmon poisoning will pass away if they are not given proper medical treatment. 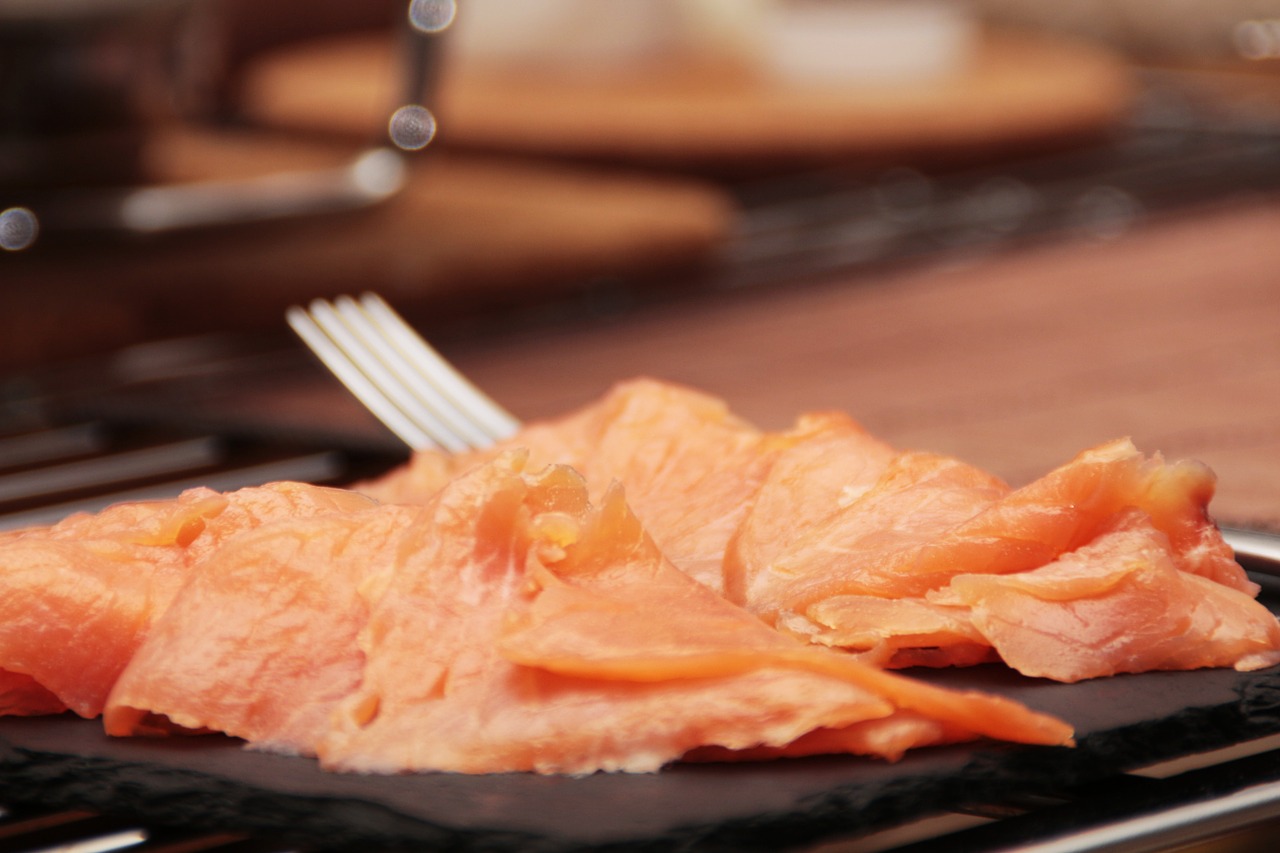 The symptoms of fish poisoning to watch out for, are as follows:

If you have fed your dog raw fish, or if your dog has gotten into a stash of raw fish, and they begin to display any of the above symptoms, then you need to get them to a vet immediately. In order to diagnose the condition, your vet will need a stool sample or a needle sample from a swollen lymph node.

In the stool sample, the parasite’s eggs can be detected, whereas the needle sample will detect the rickettsial organism itself.

Any combination of symptoms, as well as the presence of parasite eggs or the rickettsial organisms, will be enough to make a diagnosis and begin treatment.

Most likely, your vet will prescribe antibiotics, as well as a de-wormer for your dog. The antibiotics kill the rickettsial organisms that cause the poisoning, meanwhile, the de-wormer will kill the parasites themselves. And the good news is that this kind of infection is something that your dog will quickly recover from once given treatment.

But in order to avoid this altogether, don’t feed your dog raw fish – always thoroughly cook it before sharing with your pet.