Sadie went missing in West Virginia in 2014. What happened to her since then is anyone’s guess. But what happens to her now involves a whole lot of love.

The American Foxhound’s escape from a hunt club years ago was likely frustrating for her former owners, but they had no idea the journey Sadie would take. She wouldn’t be heard from again until June 2017, 400 miles away in Upstate New York, New York Upstate reports. She was still alive, but a little worse for the wear, dragging a coyote trap around with a severely injured paw.

According to Inform NNY, Chenango, New York, dog control officer Linda Hamilton was alerted to a stray brown and white hound with floppy ears. It was Sadie, injured but unwilling to give up just yet. 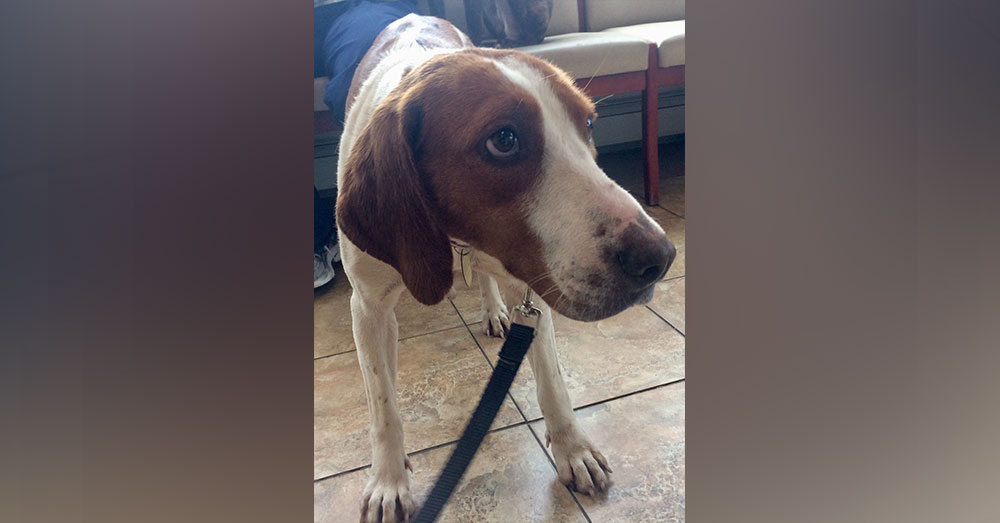 “She was traveling about nine miles a day,” Hamilton said. “Everybody wanted to help her, but people have a hard time understanding that a dog is in survival mode at that point.”

Sadie evaded capture by Hamilton for months. Eventually, she couldn’t run any longer. She lost the paw that was injured by the trap, and spent a few more weeks walking on just three legs before being rescued in June.

“She had lost an upper canine,” Hamilton said, “probably trying to get out of the [coyote] trap, and had a tear in her tongue. She probably had a litter of puppies on the way.” 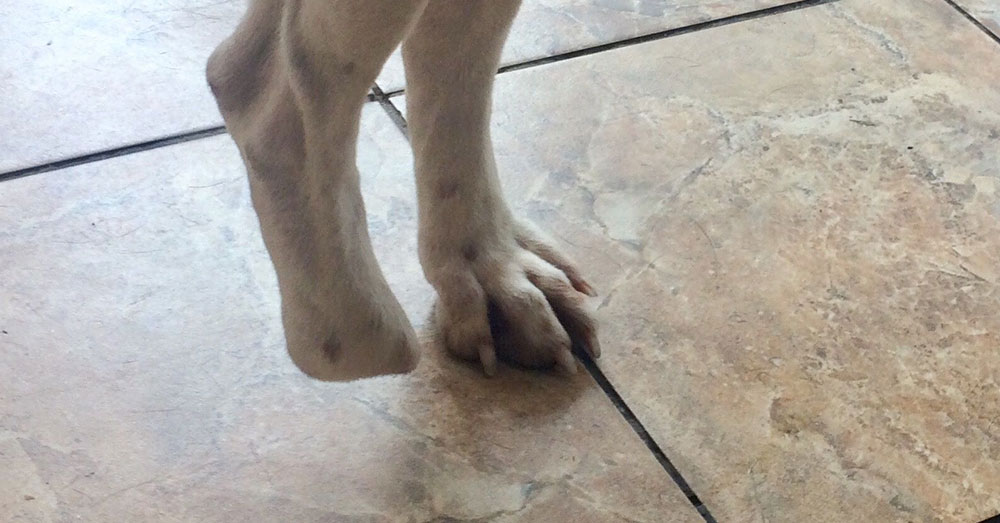 Moreover, Hamilton added, had she not been rescued, a uterine infection could have driven Sadie to death.

At the Cornell University Hospital for Animals, Sadie was nursed back to health, given a second chance, and a new paw. But it took some ingenuity,

While trying to fit Sadie with a prosthetic, assistant clinical professor of sports medicine and rehabilitation Chris Frye discovered that the dog’s leg bone was splintering off where she tried to chew it off.

“I knew if I fitted a prosthetic with a stump like that the bones would cause ulceration in the soft tissue, and all sorts of problems would evolve,” Frye said. 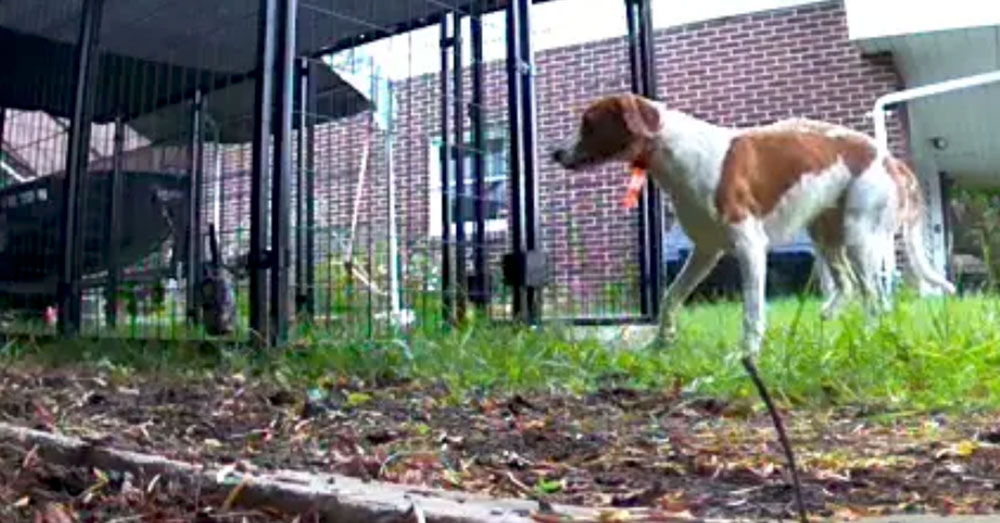 Conveniently, Sadie’s joint was still in tact, making it much easier for Frye to fit the prosthesis.

“You have to have the right family and a dog that can tolerate surgery and bandaging and cast moldings and fittings and slinging the limb if necessary,” he said. “Then you warn the owner, we could do all of it, we could have a perfect fitting with great alignment over the joint, and we may have a dog that doesn’t want to use the thing.” 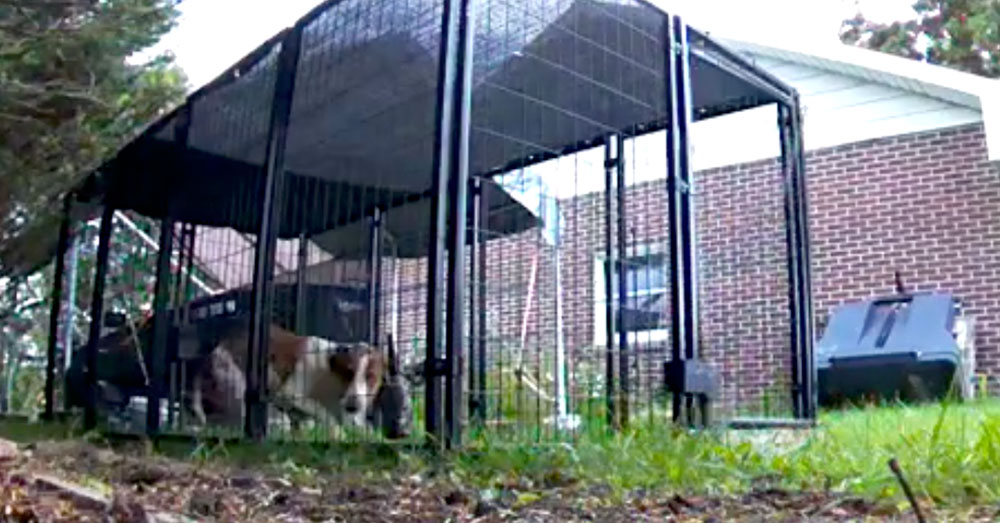 But Sadie proved to be a great patient, and a good dog. She practiced walking on her new paw a little more every day, even swimming with it from time to time.

“She used it running the other day,” Jamie Szenher, Hamilton’s partner and one of Sadie’s owners told the Cornell Chronicle. 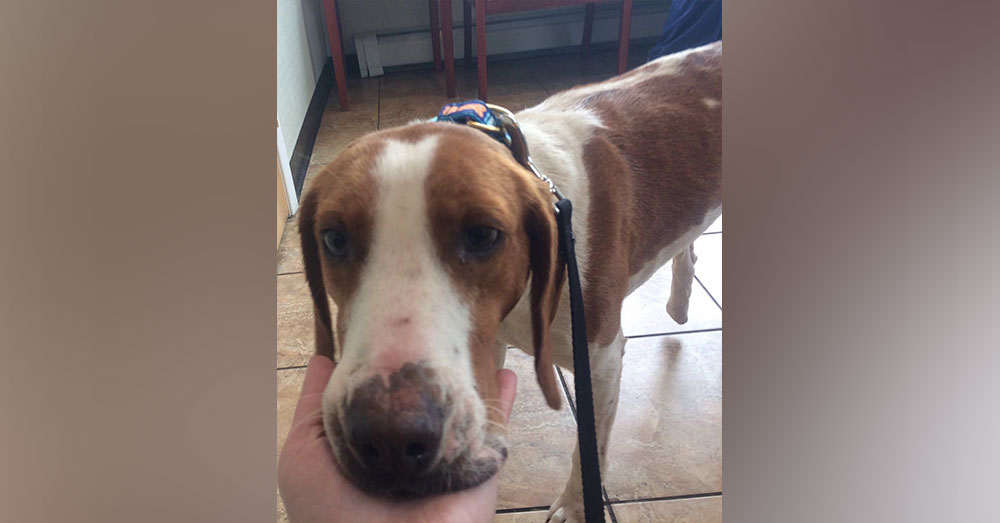 Source: Buddha Dog Rescue & Recovery
Today, Sadie is happy and . healthy, with a new paw and a new family.

Sadie’s new paw now makes a distinctive sounds as she runs. It may be difficult for the dog to evade rescuers if she ever breaks loose again. In the meantime, her new family has begun calling her “Thumper.”

Watch how animal control officers eventually captures Sadie after 3 years on the run in the video below!