He Made His Bed Daily At The Shelter. When A Couple Saw Him, They Knew They Had To Adopt Him

A stray Pit bull, named Rush, wound up at the Society for the Improvement of Conditions for Stray Animals (SICSA) in Kettering, Ohio, where he had a daily routine of making his bed while waiting for a furever home. They captured it on video and it soon went viral. 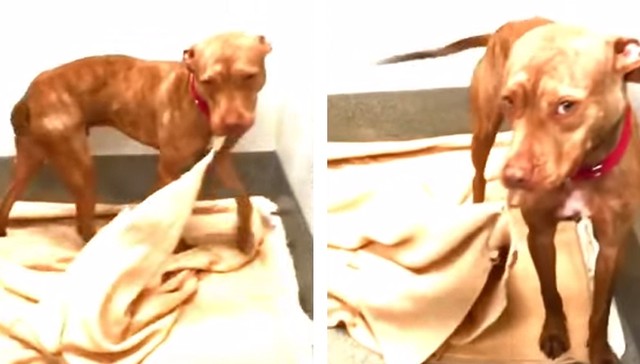 After the video went viral, people’s hearts from all over the world were breaking for Rush. Two of those people were a couple from California who had recently lost their furbaby. The woman didn’t even know Rush had become a celebrity, shown all over the Internet and the news, but had seen him just on a rescue site that she followed from California. When she saw the pup was located in Kettering, which is where she is from, she showed her husband. Her husband had already seen Rush on the news and wasn’t at all against adopting him. They contacted SICSA and started the adoption process which was approved! When they were driving to pick up Rush, they received a beautiful sign. They saw a big Cincinnati Bengals billboard which read, “Rush To Be There.” But the “to be” was small so the big words that stood out to them were “Rush There.” When they saw this, they knew it was meant to be! Now Rush will be able to make his bed every day at home instead of in a shelter!