Rick Jones is excited to be home after enduring COVID-9 for two months. His dog is happy to have him home, too.

Jones, 51, was twice placed on a ventilator while suffering from coronavirus disease. The Norton Shores, Michigan, resident endured what few even survive, and emerged with a new outlook on life.

It started out as a high fever and chills, but soon Jones was having trouble breathing. Before long, he was taken to Mercy Health Muskegon.

“He’s one of the types of COVID patients that you don’t expect to get sick really fast,” said hospitalist, Dr. MaryEllen Rosel, DO told FOX17. “He quickly needed more and more oxygen and was having trouble breathing, so I talked to him about needing to move to the ICU and I talked to him about calling his wife.” 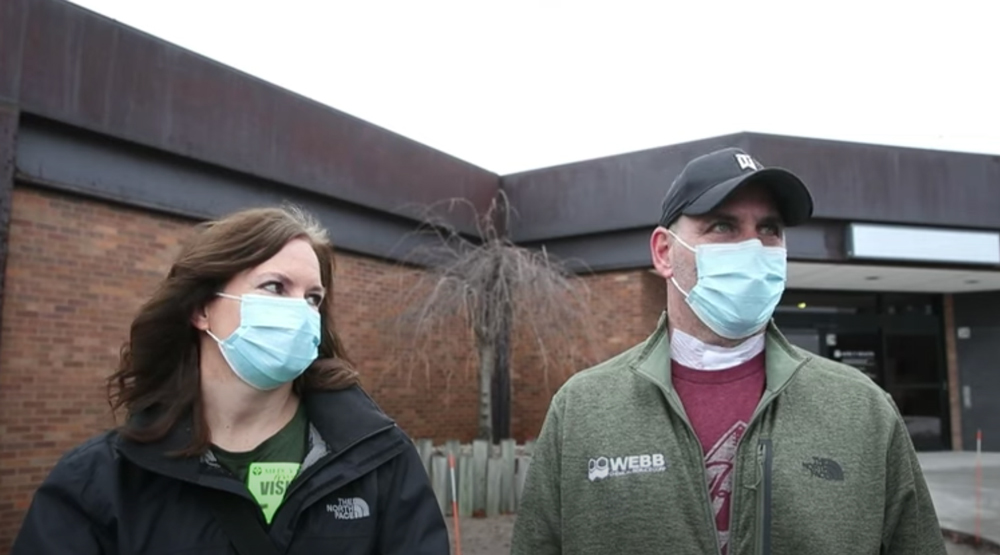 Dr. Rosel knew that the odds were not in Jones’ favor. There was a significant chance that he would never see his family again. 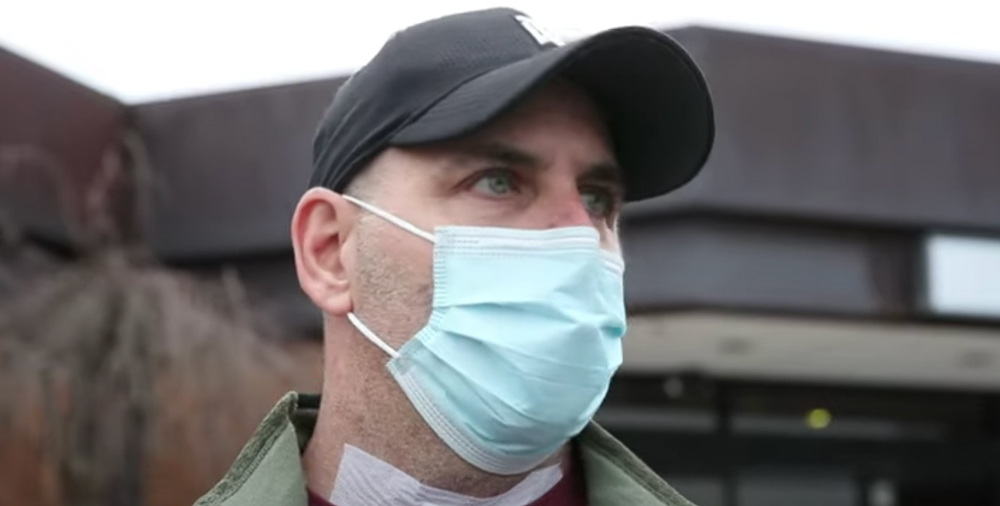 Source: YouTube/MLive
Jones was placed on a ventilator twice while being treated for COVID-19 at Mercy Health Muskegon.

Jones was hooked up to a ventilator which helped force air into his lungs while they were badly weakened by coronavirus disease. Under Dr. Rosel’s vigilant watch, Jones regained some of his strength back and the ventilator was eventually removed.

Then the situation got worse.

As Jones’ body began to shut down, Dr. Rosel hooked him up to a second ventilator. Taking into account the fact that COVID-19 has killed nearly 2 million people around the world in under a year, there was seemingly little chance that Jones would pull through at this point.

He didn’t see it that way.

“I just decided that I wouldn’t die, so it’s time to fight,” he said. 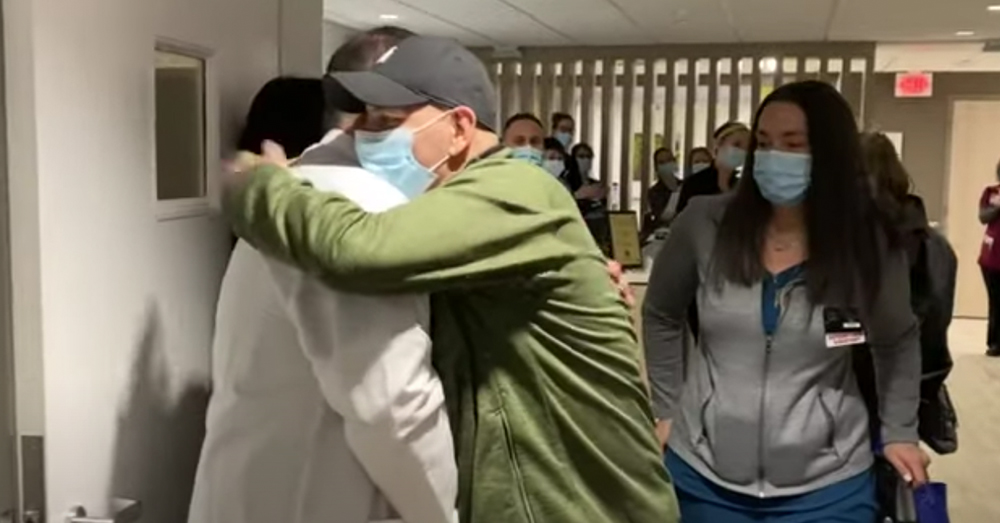 Source: YouTube/MLive
The husband and father says he owes his life to the staff at Mercy Health Muskegon.

Safety precautions kept Jones’ wife Marie from entering her husband’s room at the hospital, but she was there supporting him for two months.

“I would sit in the parking lot and just pray and pray,” she said.

Against the odds, Jones’ health continued to improve from that point on. The second ventilator was removed, and soon enough Jones was healthy enough to leave the hospital.

Doctors, nurses and hospital staff gave him a standing applause as he walked out.

“This place, these doctors, these nurses second to none and I owe my life to them,” he said. 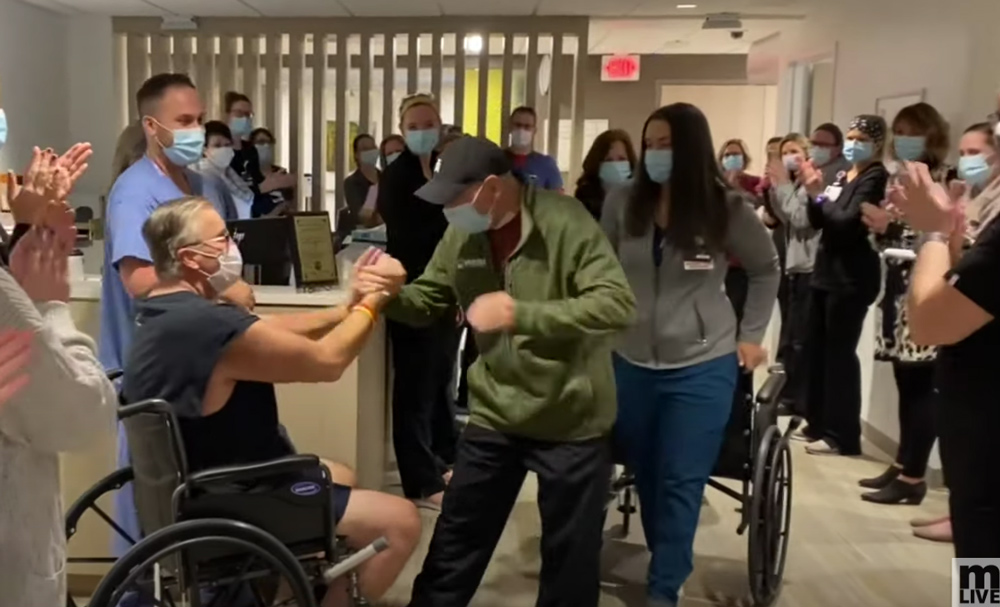 Source: YouTube/MLive
Jones was given a standing ovation on his way out of the hospital.

Some may say Jones is lucky to be alive. He lost 50 pounds during this brush with death, and still feels weakened by the disease.

“I wouldn’t wish this on anybody, it’s nasty,” Jones said.

As he was leaving the hospital with his wife, Jones was looking much healthier, and looking forward to seeing his children and dog. 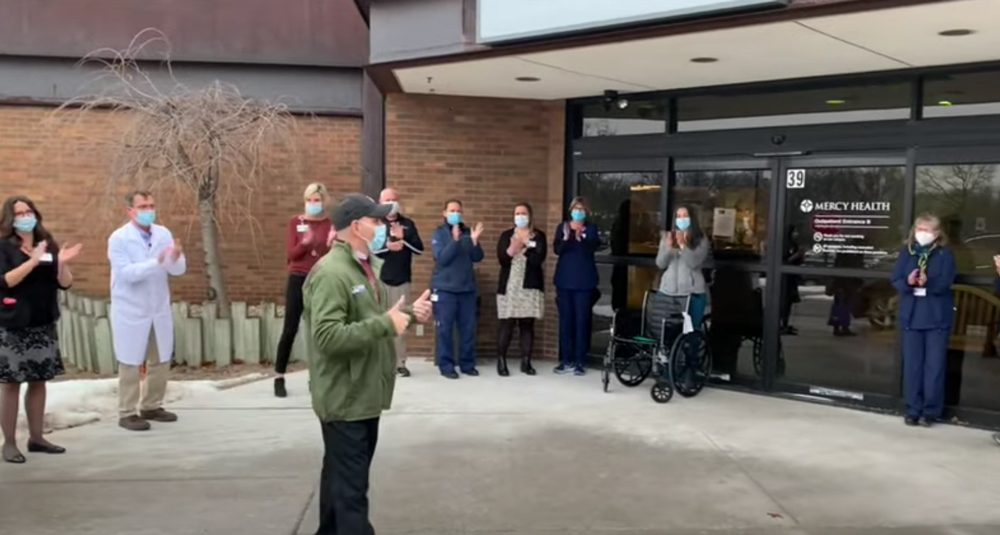 “It’s going to be great to see the girls, and the dog that thinks I’m dead,” he told a FOX17 reporter.

Retired Police Dog Starts Crying When She Meets Her Former Partner: Click “Next” below!