Since 1999, GreaterGood has been working to create easy ways for changemakers like you to make an impact, both in local communities and around the globe. In that time, we’ve raised more than $75 million dollars for a wide variety of charitable causes that provide aid to people, pets, and our beautiful planet.

Through shopping, daily free clicks, donations, and more, we’ve worked together to change the world one click at a time! And we can’t tell you enough how much we appreciate your support! Thank you for helping us reach this important milestone of $75 million raised for charity! Read on to learn more about one of the many ways you’ve helped us give where it matters.

Rescue Rebuild is one of our signature programs that helps renovate shelters around the country with help from volunteers. Our team travels to selected shelters to take projects from concept to creation to improve both the lives of humans and animals. 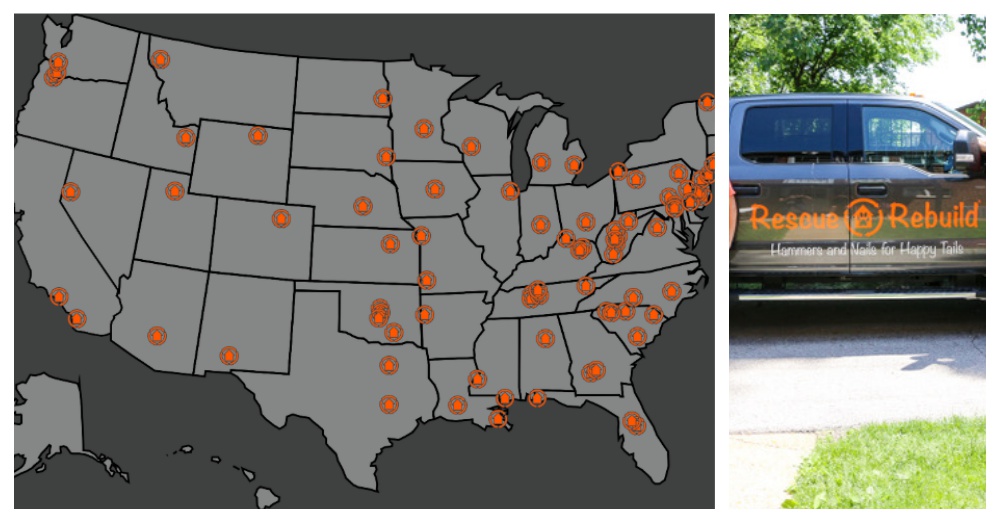 Since 2007, Rescue Rebuild has been to 49 states and with the help of over 6,200 volunteers has been able to rebuild 175 shelters. The program works with animal shelters, domestic violence shelters, homeless & veteran housing, and wild animal sanctuaries.

Thanks to your generous donations of over $876,000 over the past two decades a lot of shelters have been built or rebuilt for animals big and small. 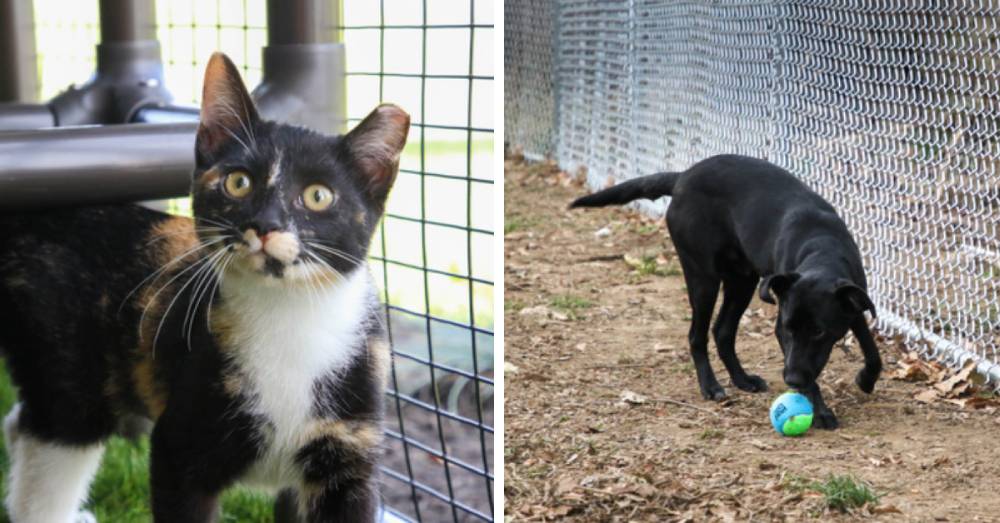 At animal shelters the crew strives to make it a welcoming space that encourages people to interact with the adoptable pets. Another goal is to enrich the lives of the shelter pets through play yards and free-roaming cat rooms & outdoor enclosures. Most of the shelters are in rural areas and extremely underfunded.

Some of the projects are in response to natural disasters that destroy shelters.

Florida Keys SPCA was hit hard by Hurricane Irma. All of the outdoor kennels, fencing and play yard were destroyed. Rescue Rebuild arrived to build an all-new play yard, six outdoor playpens with double containment, and an isolation pen.

Since all of the trees were blown over in the storm, the crew installed bright, multi-colored sun sails to provide shade for the dogs. They are now able to take the dogs outside and release all that pent-up energy! Not only are dog spirits lifted in this remarkable transformation but so are the members of the Florida Keys SPCA and the community!

As an added bonus, volunteers see how easy it is to lend a helping hand to shelters and some turn into regular volunteers.

Only 5% of domestic shelters around the country accept pets, but Rescue Rebuild aims to fix that. The program works with established domestic violence shelters to build pet-friendly spaces for people in need. Rooms are converted to allow pets and kennel facilities are put on-site.

Approximately 47% of pet-owning victims of domestic violence delay leaving their abuser because they are afraid to leave their pet behind. Rescue Rebuild also facilitates partnerships between local animal shelters and domestic violence shelters. 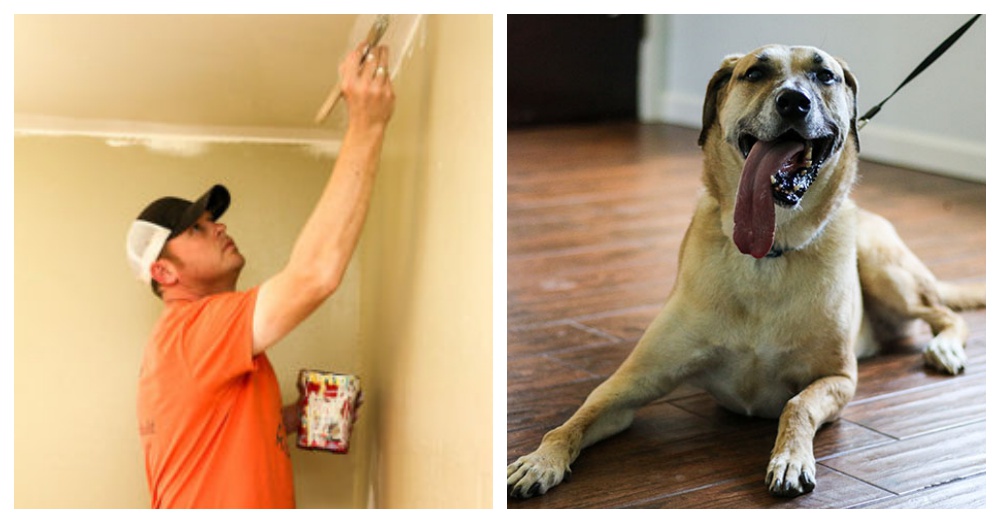 A domestic shelter in Missouri had two apartments converted into pet-friendly spaces by Rescue Rebuild. Old carpet was removed and replaced with tile floors. After a fresh coat of paint the spaces were ready to help those in need. The crew also converted a fenced-in area into a play yard for pets and their owners. In addition, they removed an overgrown garden and replaced it with raised garden boxes for residents to grow flowers, vegetables, and spices.

The shelter was transformed into a pet-friendly place for people to start over. 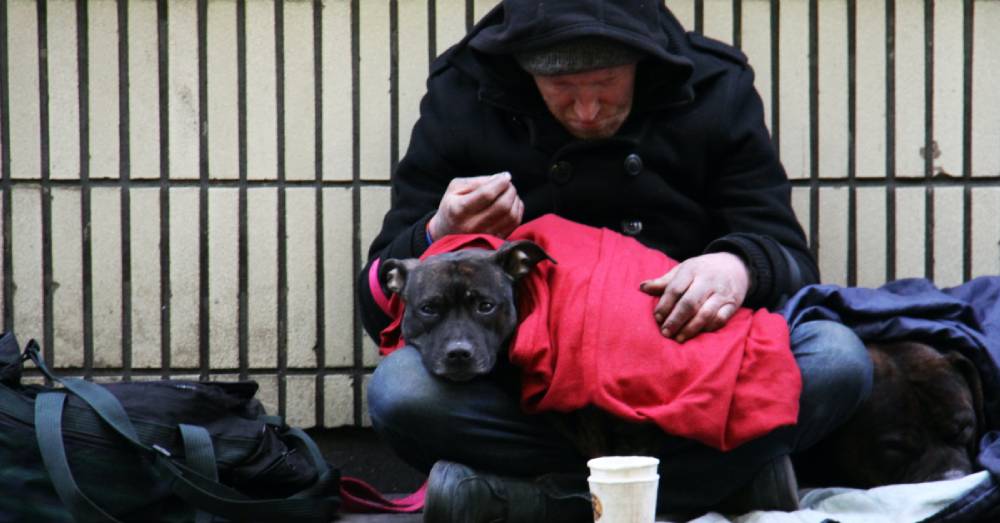 No one should have to make a decision between staying with their pet and finding a warm place to sleep. The therapeutic benefits of the human-animal bond are undeniable, and shelters strive to keep those families and their pets together. 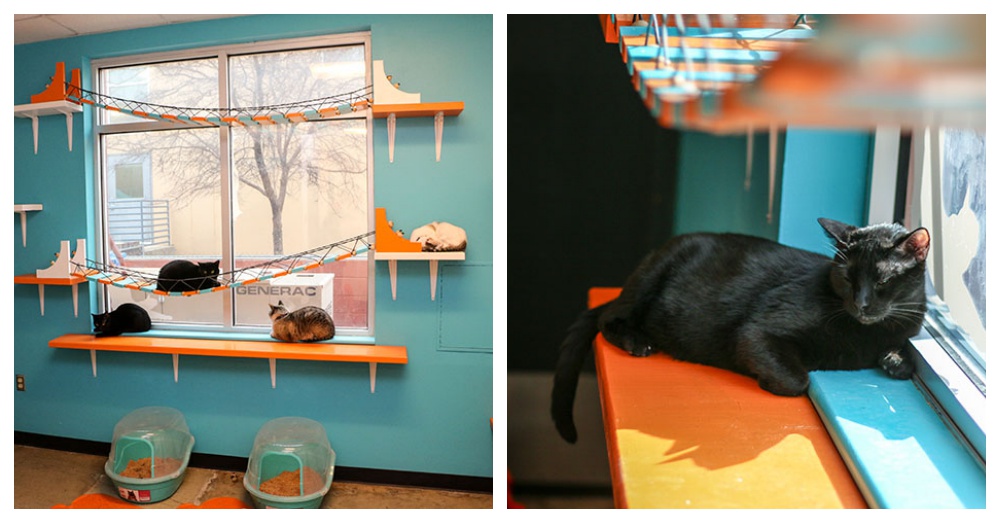 GreaterGood.org’s Rescue Rebuild teamed up with The Jackson Galaxy’s Project Safe Haven Program to help alleviate this problem at Haven for Hope in San Antonio, Texas. The shelter received a much needed makeover to a room to transform it into a cat paradise. The room was painted in brighter colors and perches were installed on the walls for cats. The crew didn’t want someone to have to choose between their pet or a warm meal and a roof. With these renovations, the shelter is able to increase their intake and change the lives of many more!

However, not all projects are indoor jobs.

A homeless shelter in Los Angeles needed a space for dogs to run and play, so Rescue Rebuild showed up and created a dog park. Check out the before and after photos below. 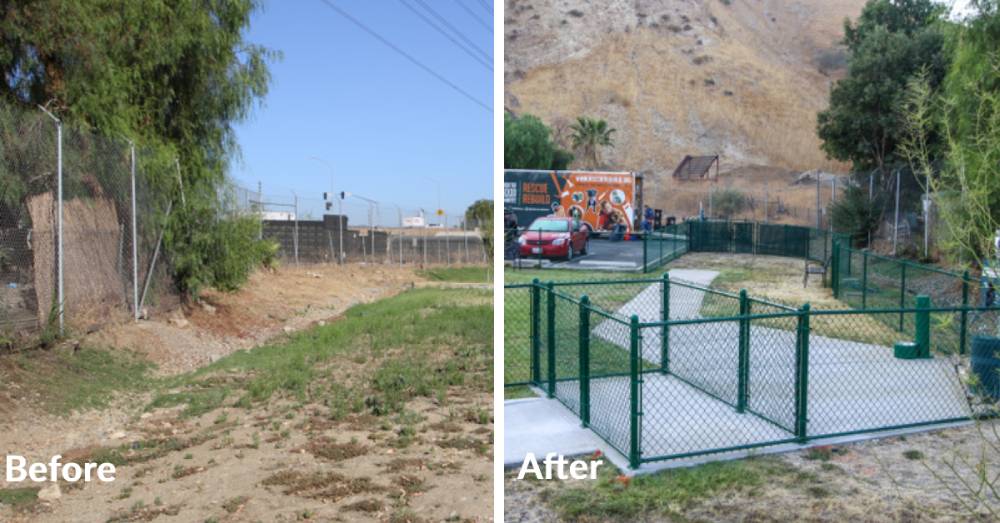 The Rescue Rebuild crew headed to southeastern Colorado to build a 300-acre enclosure for these bears at “The Refuge”. Tons of volunteers showed up and helped dig holes and run fencing all by hand. The team endured a few hail storms and embraced the outdoors by sleeping in tents, all to help animals in need. 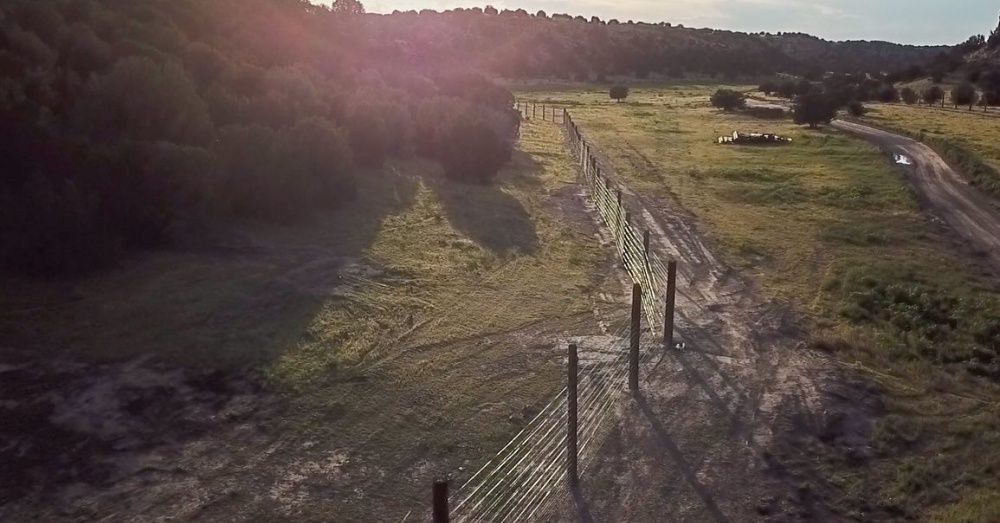 The Refuge spans more than 9,000 acres and will be able to give thousands of abused and neglected animals a permanent home. The enclosure will be home to 200 bears that are not able to return to the wild.

Shelters that are in need of assistance are asked to apply for a renovation grant here. 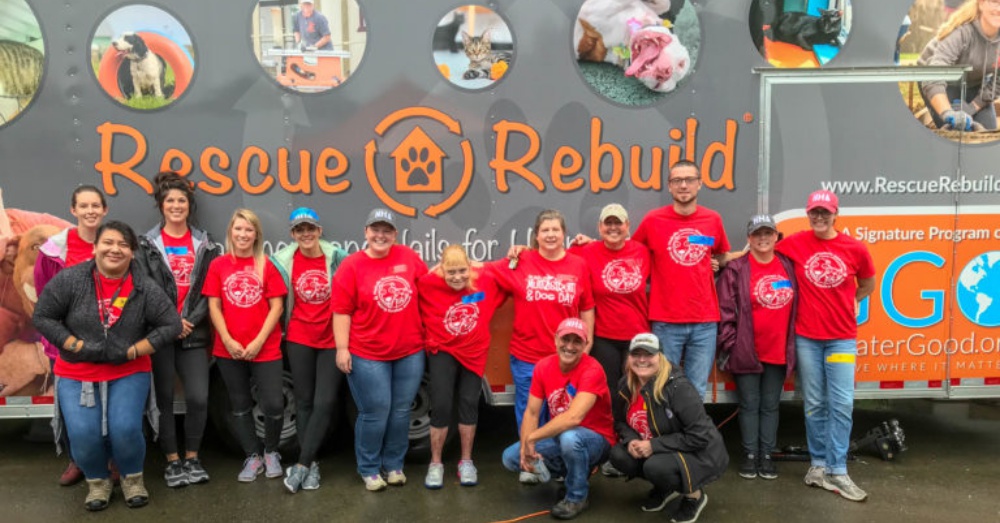 Volunteers looking to help with a project can sign up here. They cannot do it without you!

Check out some of the upcoming projects below.

Domestic Violence and Other Shelter Projects
April/ May – Central FL

To date, Rescue Rebuild (with the help of staff and volunteers) has installed over 12 miles of fencing, almost 20,000 sq ft of concrete, 42,000 sq feet of shade/rain protection, installed 655 tons of gravel, and renovated 66 cat rooms.

But their work is far from over. 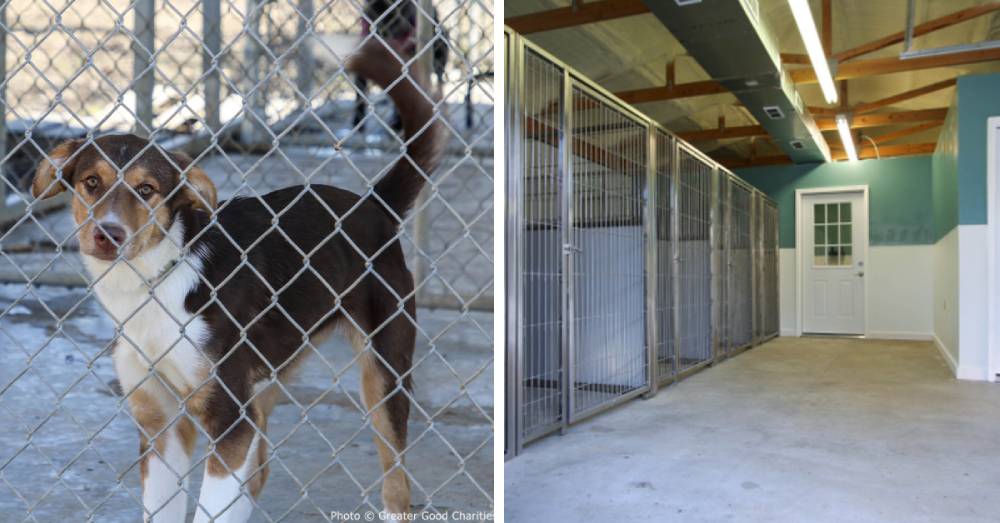 The crew will continue to transform shelters into welcoming places and has even extended their services into consulting/coaching. Zach Baker, Senior Director of Rescue Rebuild, told us, “Through the coaching, we are able to help shelters with their projects from a distance to have an even bigger impact! We also have launched our Don’t Forget the Pets website and training manual in partnership with Red Rover to help human service shelters start animal programs.”

Be sure to follow Rescue Rebuild on Facebook for updates on projects and more ways you can help.

Every daily click at GreaterGood.com helps us continue with vital projects around the world. Together we change the world!

Want to know more about all the ways we’re supporting causes you care about? Learn more here.

Support The Emergency Animal Care Fund And Save Shelter Pet Lives: Click “Next” below!