Staff were heartbroken when a Myrtle Beach Pit Bull mix, Harold, was returned to the shelter just weeks after being adopted. The Grand Strand Humane Society explained the dog hadn’t done anything wrong, but the sting was especially painful because Harold had already been returned — three times! — by people who’d promised the rescued dog a forever home.

But it wasn’t long before volunteers realized Harold’s return involved a silver lining. Just days after finding himself back at the shelter, a volunteer noticed Harold was acting strangely. When the volunteer tried to take the dog on his daily walk, the Pit Bull insisted on lingering near the loading dock area, where the shelter unloaded supplies and donations. 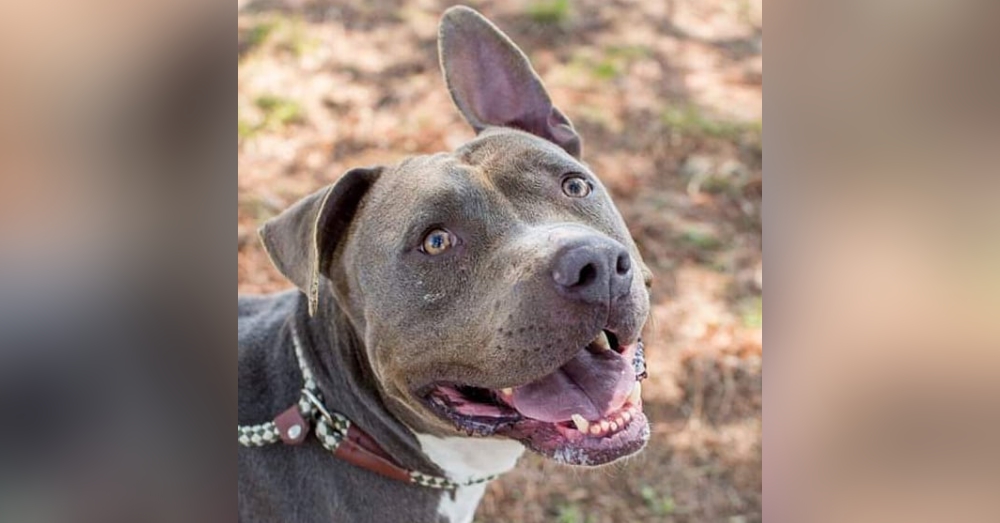 When the volunteer tried to drag the dog away, Harold insisted on circling back to this area, where a large Tupperware container had captured his full attention. When the volunteer finally opened the lid, she was amazed to find six tiny puppies inside!

“It turned out to be a blessing in disguise,” Grand Strand Humane Society wrote of Harold’s return on Facebook. “We may not have noticed them for hours given the number of containers and bags of donations that are constantly moving through that area,” the post continued. “Our sweet boy saved the day!!! He truly is a hero and six puppies owe their lives to him. Just one more reason to love our sweet Harold!”

But Harold’s newfound celebrity still wasn’t translating into a permanent home, which led everyone – including Harold — to fear the dog might spend his whole life locked up at the shelter. This worry just made the dog more anxious, distant, and depressed.

“The disappointment was too much for Harold to bear,” one shelter volunteer, Marlena Ryba, told the Animal Rescue Site. By the time Ryba started volunteering at the Grand Strand Humane Society, the despondent dog didn’t even bother to wag his tail. 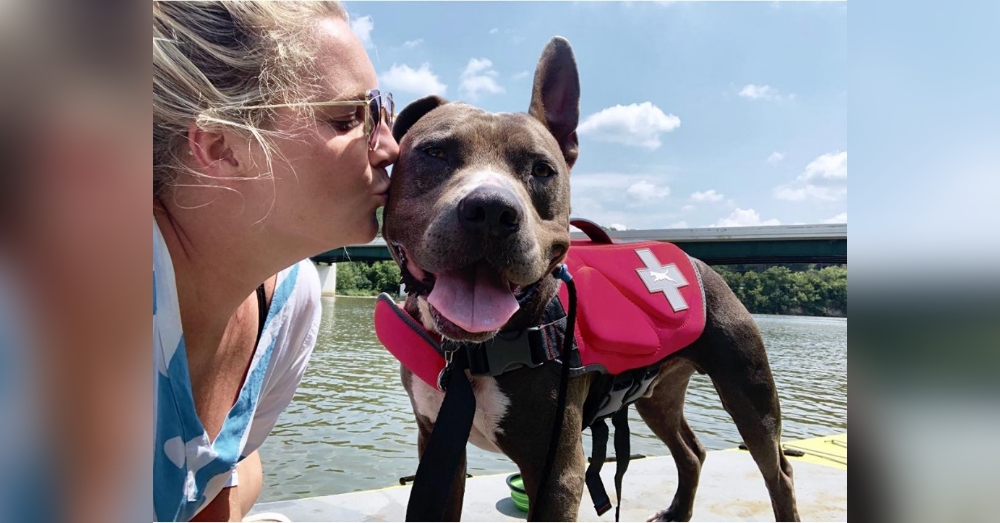 But Ryba, who’d learned of Harold’s heroism on the local news, still made a point of stopping by the depressed hero’s cage. “My first day volunteering I made it a point to go by his kennel and see him,” Ryba recalled. “He was devastated and looked pitiful. He wouldn’t make eye contact, his tail never wagged, and he’d barely lift his head when I called his name,” she remembered.

Moreover, the dog was drooling uncontrollably – a sign of extreme anxiety — covering himself and his kennel floor in slobber. “My heart ached for him and I couldn’t get him off my mind,” said Ryba, who began visiting Harold daily. The pair started to bond and, in time, Ryba “started to see a sparkle in his eyes and his big ‘pittie’ smile.” 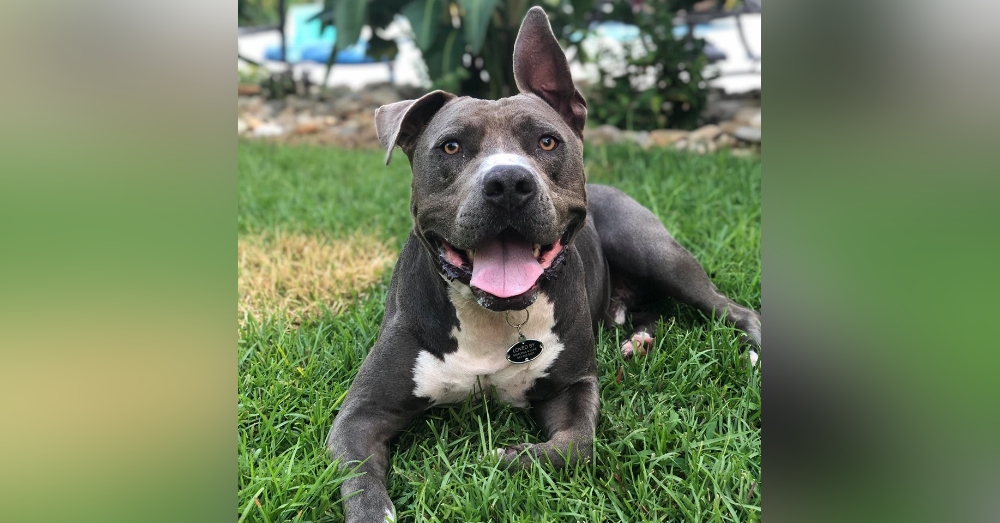 Ryba eventually came to realize she and Harold were destined to be together. “After every walk, it pained me to return him back to his kennel,” she said. “I couldn’t allow anyone to disappoint him ever again. I was convinced Harold and I were meant to be, and I was determined to help him succeed in the world – something he had not experienced before.”

“So, we decided to make it official and became a forever family,” Ryba said. She signed the paperwork to bring Harold into her forever family almost exactly two years after the dog was returned to the shelter for the third time.

On the morning of Harold’s “freedom ride,” Ryba went to fetch the dog from his kennel, just like she did every morning. “Only this time, Harold “the dog nobody wanted” took his very last walk out of the shelter doors,” she smiled. (The adorable video clip, which you can view below, has already garnered over 1 million views on Facebook). 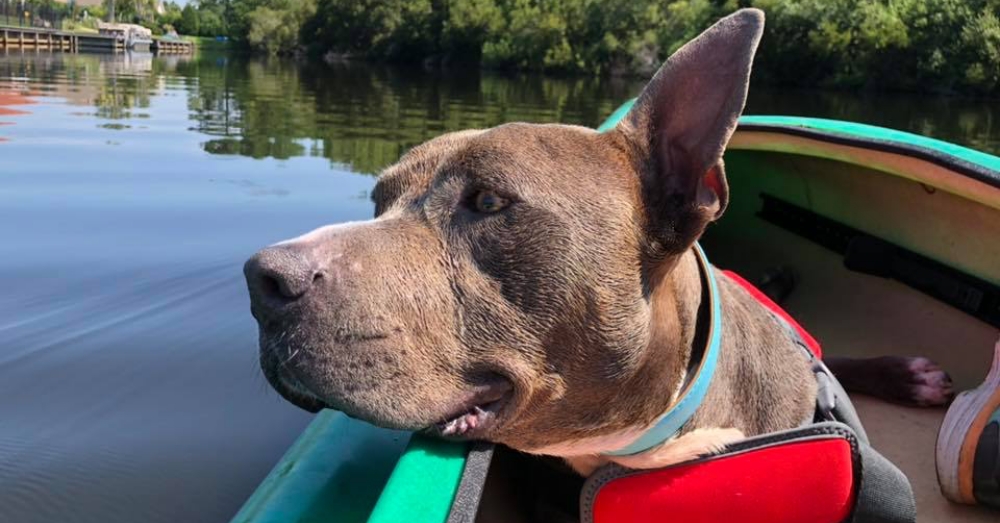 Nowadays, Harold’s days are filled with “fun dog things,” including lots of love, cuddles, and new adventures, according to Ryba. “There are no words to explain how much joy he’s brought into my life,” she says. “Harold has been a hero to many, but he will always be my hero! I’m in awe of his resilience and his bravery to still love so fiercely. His story serves as a reminder that heroes can come from the unlikeliest places, and that even they, sometimes, need saving!”

Watch Harold’s adorable “freedom ride” in the video below!

Looking for something to smile about as you start up the grill, or head off to the beach?? This is a video of our sweet, stunning, superhero pup Harold taking his last ever walk out of our kennels. Harold's new mom has been working with him for months to build an unbreakable bond, preparing her house for him, reading every book and asking every question in order for this adoption to be a success. We are 1 million percent sure that there couldn't be anyone more perfect for Harold. You'll agree too after watching this video!Harold has been home for 1 week now and is doing so well because his mom is 100% committed to making this work. They take new adventures every day and are building his confidence in the outside world slowly. Keep checking our page today for more updates on Harold in his new home!! P.S. His mommy's name is Marlena and the pair has been coined #teamharlena …we know, epic, right??! #haroldishome #haroldthehero #teamharlena #dedicateddoptersrock #everydoghasamatch #everylifematters #nevergiveup