Earlier this year, my wife and I fostered a little rescue cat named Summer. When we first brought her home, she was very shy and skittish, spending 90% of her time hiding under the dining room table, and the other 10% hiding under the coffee table in the living room. Eventually, she began to come out more and would often join us on the end of the sectional sofa, precariously perched on the very end with a look of judgment on her face. We thought this was as close as we were ever going to get to her. But then one day, with a little love and a little bacon, we were able to break through with her. And after that she became quite the pet, insisting that her favorite snuggle spot was on top one of our shoulders like a parrot.

My Uncle Max used to say that all it took with rescue animals was a lot of love and patience in order to reassure them that they’re safe with you and won’t ever have to relive their past traumas. And it’s true. 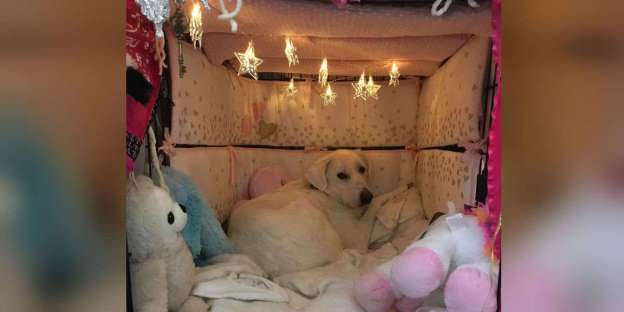 When a dog named Bella was first rescued two years ago by the Project Hope Animal Rescue in Michigan, she was scared of everything. The poor dog was adopted but took some time settling into her new home. Her family’s heart broke for her when they realized that she’d never been inside a home before, as every little noise or movement terrified her. Bella would slink through doorways, and avoid playing with toys because she had no idea what they were. 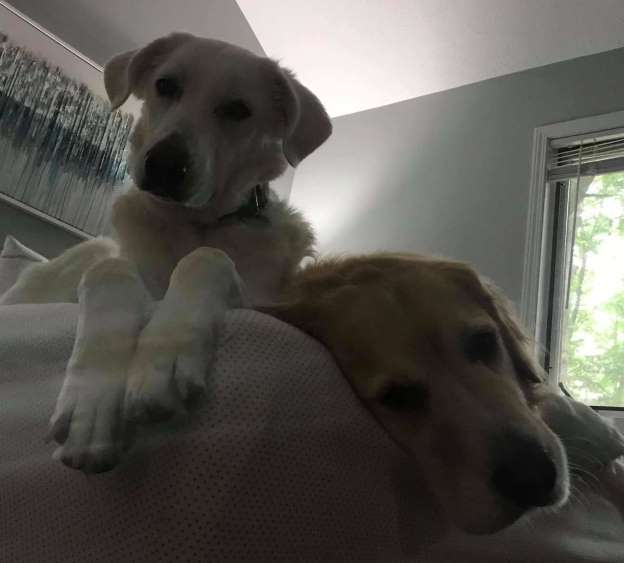 Bella eventually began to come out of her shell with the help of the family’s other dog, Mack. He helped to teach her how to be a dog, and her family was so proud of all the progress she’d made.

As her owner, Melissa Maher, explained to The Dodo, “The ‘small’ obstacles like eating her entire meal and not hiding some for later in case she doesn’t get another meal, not cowering on walks when we see other humans, actually approaching another human who comes into our home She has come such a long way. Her bravery is amazing.” 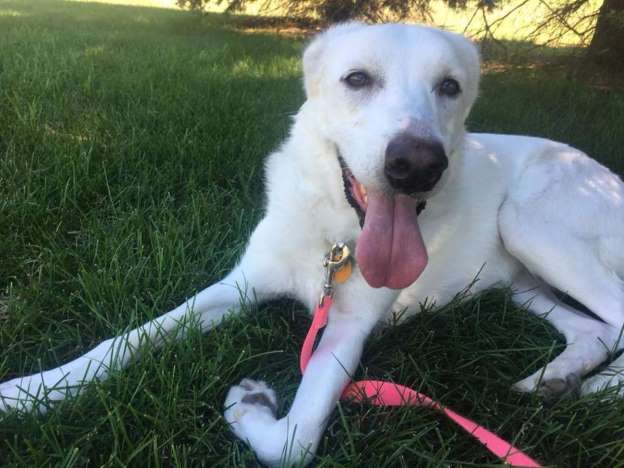 While Bella worked to improve her trust in people, the one place in the entire house where she seems to always feel safe and secure was her crate. In order to help her never feel trapped inside, her family never closed the door. Plus, whenever she was in her crate, they gave her space so she could decompress and feel more comforted.

“Her crate was her first safe place when she came to us,” Maher stated. “That was the place where she was not to be bothered. She learned that quickly.” 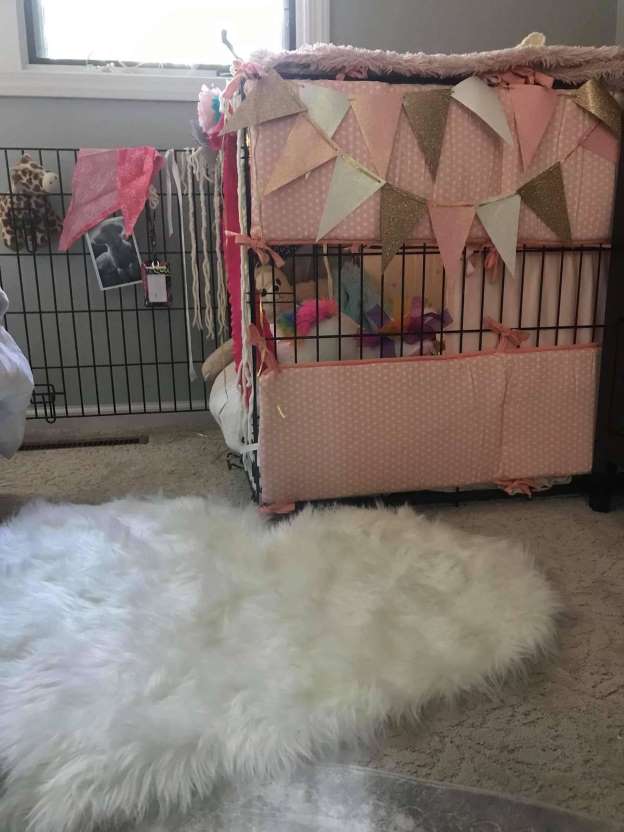 After a little while, Maher made the decision to give Bella’s crate a little upgrade. Since Bella came from absolutely nothing, Maher wanted Bella to feel know that she was cared for, so she set off giving the crate a makeover in order to make it look cuter and feel comfier.

“When I was decorating her crate for about 1.5 hours, she just sat on the bed watching like, ‘What are you doing, Mom?’” Maher remarked. 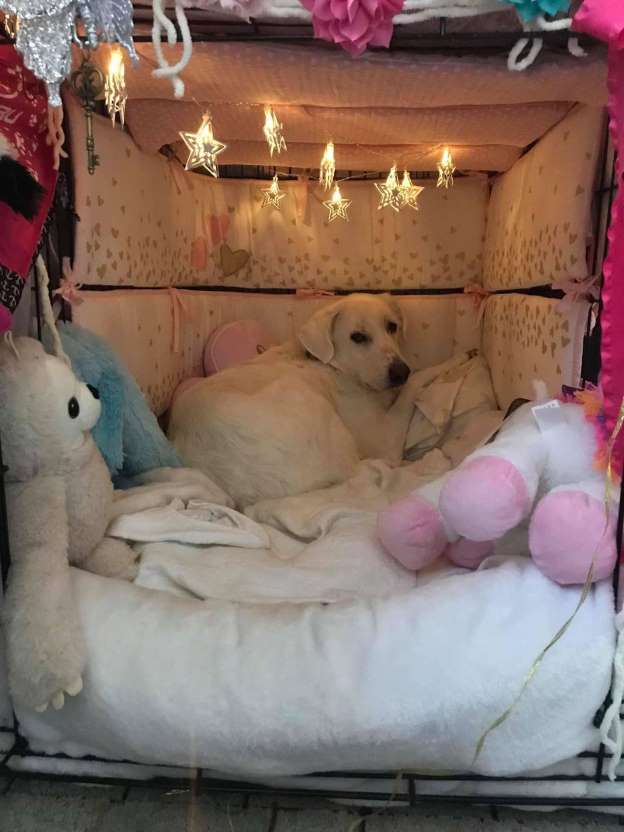 When finally finished, Bella’s crate became the cutest and fanciest spot in the house – although all that Bella cared about was that her space was still cozy and safe.

“When she was finally allowed to go in she just sniffed everything and laid right down. So cute. She loved her crate before it was all fancy, though, in all honesty. I’m not sure if the decor was more for her or for me,” Maher said. 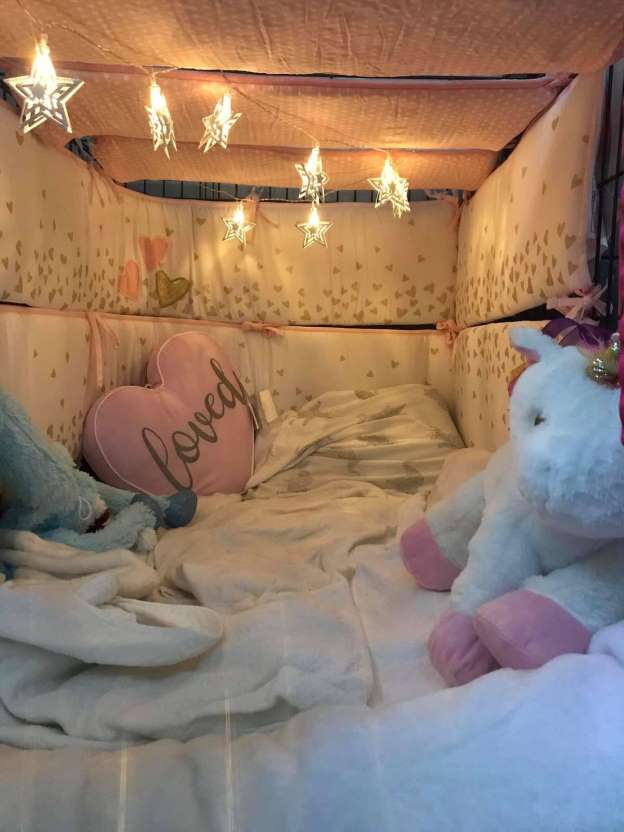 Even though Bella had a rough past, she has now landed a new streak of luck with a loving family. And Maher makes sure to have Bella feel like she’s the most loved and spoiled dog in the world.