Parrot Gets Into The Halloween Spirit By Picking His Own Pumpkin!

Halloween isn’t just fun for humans, it’s fun for pets too! Check out this parrot, as he carves his own pumpkin (while supervised, of course!). I wonder what his creation will be… Maybe a self portrait? HAHA That would be adorable!

Halloween is a fun time to dress up, go to parties, and have some fun with our fur babies and kids. Ever wonder about the history of Halloween? Me too! Like, where did the holiday come from… 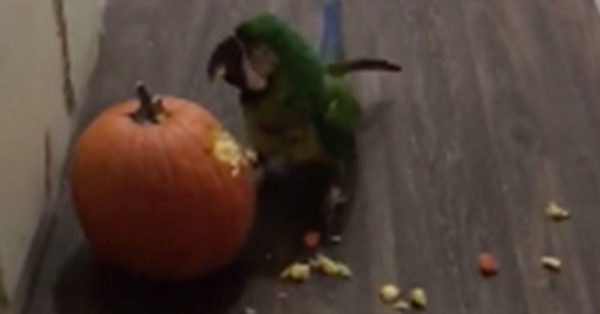 The celebration of Halloween dates pretty far back, all the way to the Celtic festival of Samhain. 2,000 years ago the Celts, who lived in Ireland and Northern France, celebrated the New Year on November 1st. This special day marked the end of summer, and the harvest, and the beginning of winter. Sadly, that time of year was associated with lots of human death 🙁 So, the Celts believed that the eve of their new year, October 31st, was the time that the worlds between the living and the dead, blurred into one.

They also believed that these spirits walked the earth that night, wreaking havoc and destroying crops. But because these spirits were close by and connected to the living, the Celtic priests were able to see into the future and were able to predict important events. So, even though it was pretty spooky, the Celts welcomed this festivity to prepare themselves for the upcoming year. They wore specific clothing too. Pretty cool, huh?