This Kitten Wobbles When He Walks, But He Found A Forever Family Who Will Love Him Unconditionally

A tiny kitten named Quaffle came to Best Friends Kitten Nursery in Los Angeles, California. But he was a little different from other cats. He has Cerebellar Hypoplasia, a neurological condition in which the cerebellum is smaller than usual or not completely developed. This causes Quaffle to wobble around when he walks.

But Quaffle doesn’t realize he’s any different from other kittens, and he doesn’t let his condition slow him down! He still gets around and loves to play with his toys. Not long after arriving at the nursery, Quaffle was adopted into a loving forever home!

Quaffle now enjoys his new life with his kitty siblings. He has a family who loves him so much, despite his unique condition. The Best Friends Animal Society describes him best as a “nonstop bundle of energy and curiosity.”

There are many kittens like Quaffle who are at shelters waiting for their forever homes, too. Quaffle’s story is a perfect example of why it is so important to adopt and not shop! Next time you’re thinking of getting a new kitten or cat, make sure you visit your local shelters to find your purrfect match!

Watch cute little Quaffle in the video below:

Dogs React To 'Raise The Woof,' The World's First Holiday Song For Dogs: Click “Next” below!

Dogs React To ‘Raise The Woof,’ The World’s First Holiday Song For Dogs

Dog ‘Stands Guard’ While A Solider Naps At The Airport 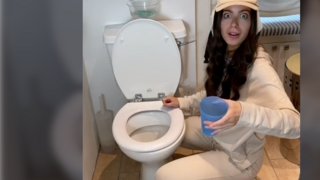