This Page Provides Purrs For You Anywhere You Have WiFi

Is there anything more soothing than the sound of a furry feline’s contented purr?

We think not. And there are many others who agree. Research engineer and sound designer Dr. Ir. Stéphane Pigeon, for one, isn’t only on the same page, she’s turned a cat’s purrs into a pleasing purr generation machine.

Just log on and turn up the purr. Pigeon’s software handles the rest and lets users test out different combinations of “sleepy” or “happy,” “steady” or “lively,” and “purrfect” or “meowy” to optimize their auditory experience. 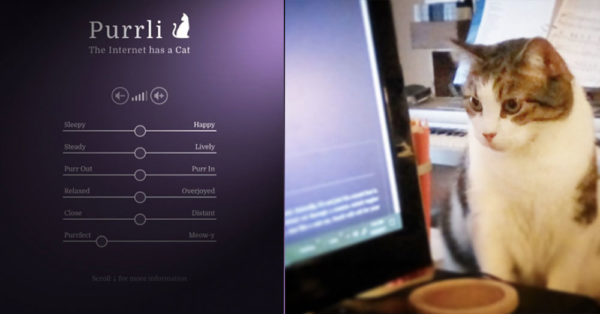 “The sound of a purring cat is one of the most comforting sounds available and can help soothe and calm you down when you’re feeling stressed,” Pigeon writes. “Naturally, it’s not just the sound that is important, but it’s also the presence of the warm cuddly cat. Purrli tries to recreate both the sound and the presence of your very own virtual cat through a custom sound engine modeled after real purrs.”

Pigeon’s algorithmic rhythm even changes with time, mimicking the purr patterns of a real cat. Speaking of which, real cats are quite fond of the familiar sounds too.

Meet Babouche, the real cat behind Purrli. She helped with creating the audio model! Thanks Babouche!

The purr behind the page is a cat named Babouche. Pigeon’s Purrli Instagram page, purrlipurrs, maintains that Babouche’s dulcet tones provided the initial model for the various audio patterns.

Meet Gracie, the first (non beta tester) cat to be intrigued by Purrli since it launch today.

“In the beginning, I thought a cat purr would be no more than a gimmick. Something fun, but probably useless,” Pigeon writes. “Many user testimonials later, I realize how wrong I was. Thanks to the interaction with cat purr fans, I have discovered the many uses of such a particular sound, and—here is the revelation—just how such a simple sound can brighten the day of many people around the world.”

Technology is truly bringing cats into the 21st century, but for a look into their history, click the link below.