We all love the beach. It’s a great place to hang out and forget about your troubles for a while as you’re serenaded by the sounds of the ocean. As adults, we probably spend the majority of our time at the beach just lounging around. But how many of us can remember being young children and wanting to play in the sand?

Well, it’s not just a kid thing to like to dig up sand at the beach and build giant sandcastles and other structures – our dogs also love to play in the sand at the beach. However, they don’t necessarily build impressive structures, so much as they just like to make holes. Regardless of the difference, they’re still pretty proud of themselves – like the adorable golden retriever, Angus.

In the cutest beach video ever, Angus can be seen enjoying his day at the beach. The little pup worked very hard to dig himself a hole. Sadly for Angus, the tide was not on his side that day, and it destroyed all his fine handiwork.

For any of us, we know that there is a certain time when the tides change, and playing in the sand by the shore can get a little tricker. Of course, most of us risk is because that’s where the good sand is. But when the tides move in, it becomes harder to play uninterrupted. There is where the little Angus ran into his problems. 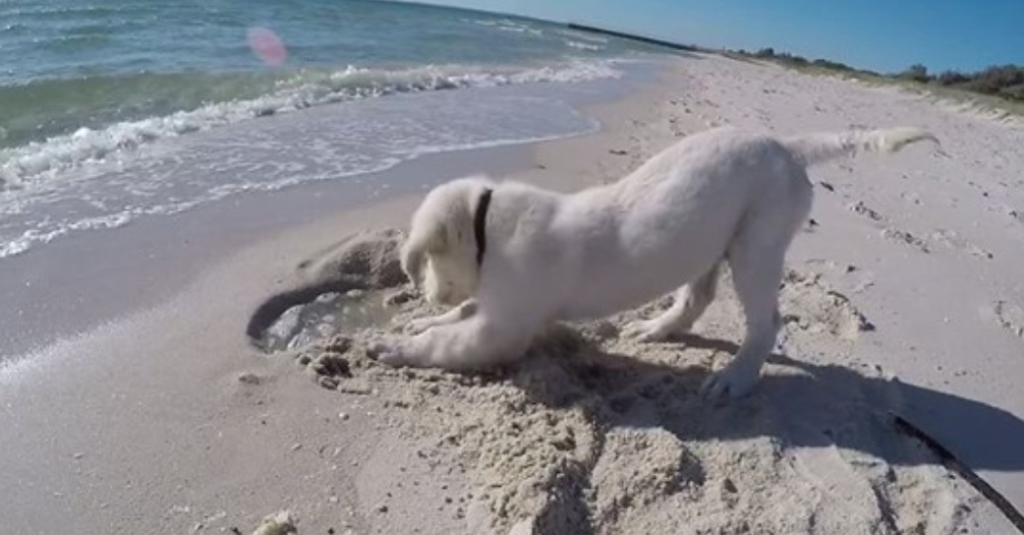 The spectacular hole that he’d dug ended up getting filled with water by the tide. In the video, the happy little pup is digging at his hole when he takes a break to sniff around. During that time, a wave starts to get closer and closer to his hole. The little pup tries to bark at it to warn it away, but unfortunately, that doesn’t work. The water still rushes in and quickly floods his hole, destroying all his handiwork. It’s something that confuses the poor little pup.

He looks so heartbroken by the entire thing, it’s actually a bit sad to watch the end of the video below: