I’m going to go out on a limb and say that puppies are adorable. In fact, it’s hard not to smile when you see a puppy in action, regardless of whether they are doing something good or something naughty. In addition, you don’t have to do much to make a puppy happy. Just give them some attention and perhaps even a task to do and before you know it, they will be wagging their tail.

Having a puppy in your life is certainly something that most of us should experience at least once in our lives. There is nothing quite like it, and every day seems to be a good day when you have a puppy by your side. People may love many different types of animals, but it is the puppy that tends to make it to the top of the list of things that kids ask for when they are growing up.

Of course, we all realize that puppies are eventually going to grow up to be dogs, so it’s a good idea to start treating them from the time they are young to display the traits that we will want them to show when they are older. That is obviously what one owner of a labrador puppy was doing, as he was teaching the little dog how to fetch the newspaper from the driveway.

Gracie is the name of the puppy in the video and her mother and grandmother were both loyal dogs who would get the newspaper for Peter Schulz, their owner, every day. It was a scenario that played out on a daily basis, where the dogs would run to the end of the driveway in their Jupiter, Florida home to grab the paper. 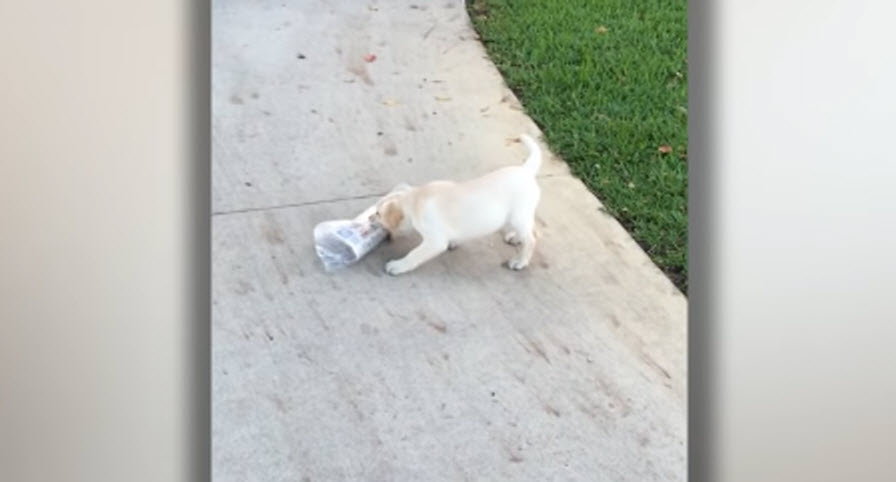 Gracie was also eager to follow in their footsteps and she ran to the driveway to pick up the newspaper in her mouth. The thing is, she was only four months old when the video was shot so it was a good attempt, but somewhat of a fail. She continued to try and at one point, she seemed to run up to Peter to ask for some assistance. He gave it to her, showing her where to grab the wrapped paper and how to drag it up the driveway.

It took some persistence on the part of Gracie, but eventually, she was able to drag it along with her. On this particular day, which was a Sunday, the paper was extra-large which made it extra difficult for such a small dog.

Hearing about it is one thing but watching it is quite another. You can see the whole thing in the following video: