They sometimes say that “birds of a feather flock together” but it is also true that “opposites attract.” It’s a beautiful thing when we see it in action, such as what we see in the video below of a calf and a golden retriever puppy becoming best of friends.

The TikTok video was created by Blanáid May in Ireland, and after being posted, it went viral for the most adorable reasons. It shows these two strange bedfellows reuniting after being apart for a few months and rekindling the love that they had for each other when they met the first time.

When that first meeting occurred, the calf had to go away for three months, but when it returned, they recognized each other instantly. It’s easy to see how happy the dog was by the wagging of his tail and they licked each other affectionately. 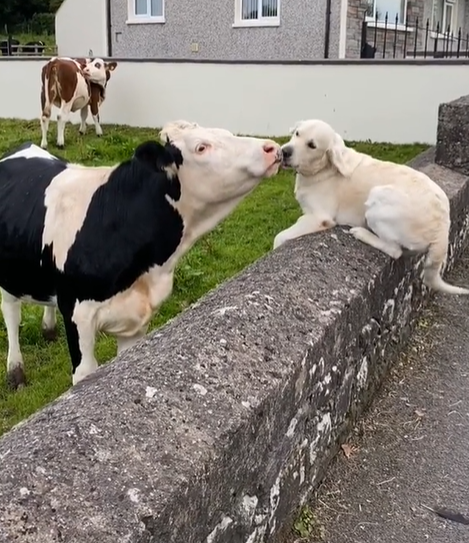 The puppy even wanted to get closer to the calf, so he jumped up on a fence to do it. All the while, the little cockapoo owned by Blanáid was trying its best to get in for a little of that lovin’ as well.

Although the video stands on its own as being one of the most adorable things we’ve seen, the audio brings it out so nicely. It says: “They say when you meet the love of your life, time stands still.”

I couldn’t have said it better myself. Watch the video below.